Old fishing nets in Thailand are often left to be washed into the sea, where they ensnare marine animals. But a local company has found a solution to the surplus of old nets by melting them down into protective gear that could help Thailand battle the coronavirus.

JULY 2, 2020 - RAYONG AND AYUTTHAYA, THAILAND - Thai fisherman Anan Jaitang used to pile tattered nylon fishing nets on the beach after hauls of wriggling crabs tore them beyond repair, but most of the nets wound up in the sea, threatening to entangle turtles and choke coral reefs. Now, Mr. Jaitang and others have an alternative that's not only lucrative and environmentally friendly but will help Thailand battle the coronavirus pandemic. 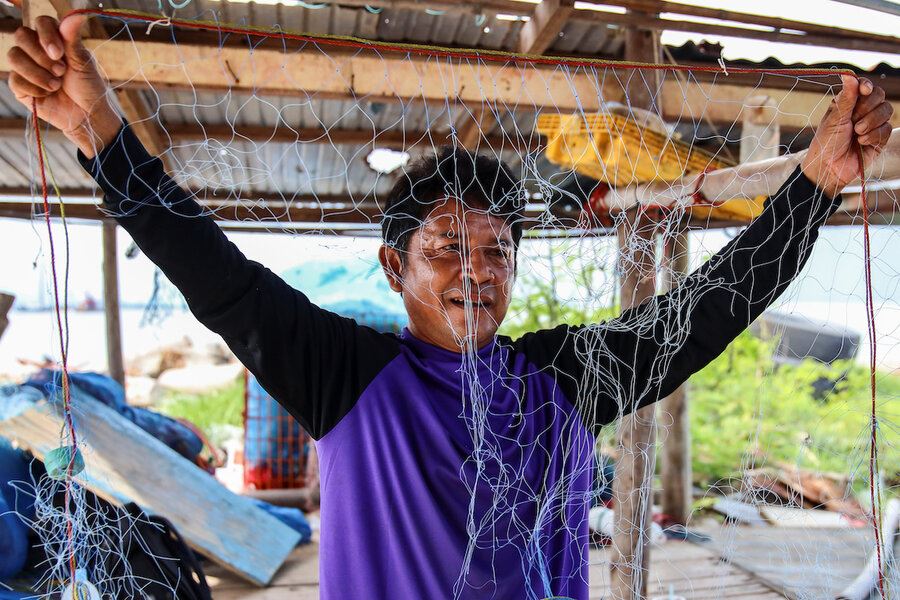 Fisherman Anan Jaitang holds up a fishing net to be melted down and molded into protective gear in Rayong province, Thailand, June 28, 2020. An innovation local net-recycling company says it has collected more than 1.4 tons of used nets in the past two months.Jurawee Kittisilpa/Reuters

A new community-based project is paying small-scale fishermen 10 baht (32 cents) per kilogram of discarded nets, or about every one or two, to recycle them into items from push sticks to face shields and disinfectant bottles.

"If no one bought my fishing nets, they would just pile up like a mountain," says Mr. Jaiting, who goes through about 36 nets every quarter, fishing in the east coast province of Rayong.

He is among more than 100 artisanal fishermen from four coastal villages in Thailand's east and south to have joined the project, run by the Environmental Justice Foundation (EJF).

With 50,000 small fishing vessels and 10,000 commercial ships, Thailand has one of the world's largest fishing industries, and is also one of its top marine plastic polluters.

Hundreds of endangered sea animals wash up on Thailand's shores every year. About 74% of sea turtles and 89% of dugongs stranded on the beaches between 2015 and 2017 had been injured by nets left or lost in oceans, official Thai figures show.

About 705,480 tons of fishing nets end up in the ocean globally every year, becoming "ghost gear," the United Nations says.

In addition to tackling Thailand's stubborn pollution problem, the project offers a rare all-domestic solution to a global challenge.

Thai design company Qualy is buying most of the fishing nets being collected by EJF.

Its recycling and manufacturing operations are based in Thailand, unlike similar projects in other countries that ship nets abroad for recycling.

Workers at Qualy's recycling factory in the central city of Ayutthaya wash the nets before feeding them into a shredder that yields blue nylon granules to be mixed with colorants and melted down in product molds.

During the pandemic, Qualy has shredded 1,500 lbs of nets to make face shields, alcohol spray bottles, and push sticks for elevator buttons and ATM machines to avoid contact.

He declined to give financial details but confirmed the net recycling operation was profitable, with sales in Europe, Japan, Singapore, South Korea, Taiwan, and Hong Kong.

"Buying the nets supports the fishers' livelihoods, and we can make new products out of them," Mr. Suppametheekulwat said. "It's even better when it also helps save our environment."

The Thai government has welcomed the initiative.

"Any efforts to remove the nets from the ecosystem is welcome," said Ukkrit Satapoomin, the director of Thailand's Office of Marine and Coastal Resources Conservation.

EJF said the project had collected more than 1.3 tonnes of used nets since a pilot phase two months ago, and plans to expand it to all seaside provinces by year-end.

"It's really important and urgent that we tackle this problem," said campaigner Ingpat Pakchairatchakul.

"Local communities are very environmentally-conscious already, but they just need helping hands from other sectors."

For Mr. Jaitang, the fisherman, the project has not only brought extra income, but put a smile on his face at the thought that his trash contributes to a worthy cause.

"I've seen the products, and I'm proud of my materials," he said, after seeing a push stick made from recycled nets.

"At least it helps the society and saves the environment."

This story was reported by Reuters.