Saving the sea: Gray's Reef serves as a model of conservation

Thanks to U.S. government protection for the past four decades, an area off Georgia's coast is now a spectacular home to hundreds of marine species. 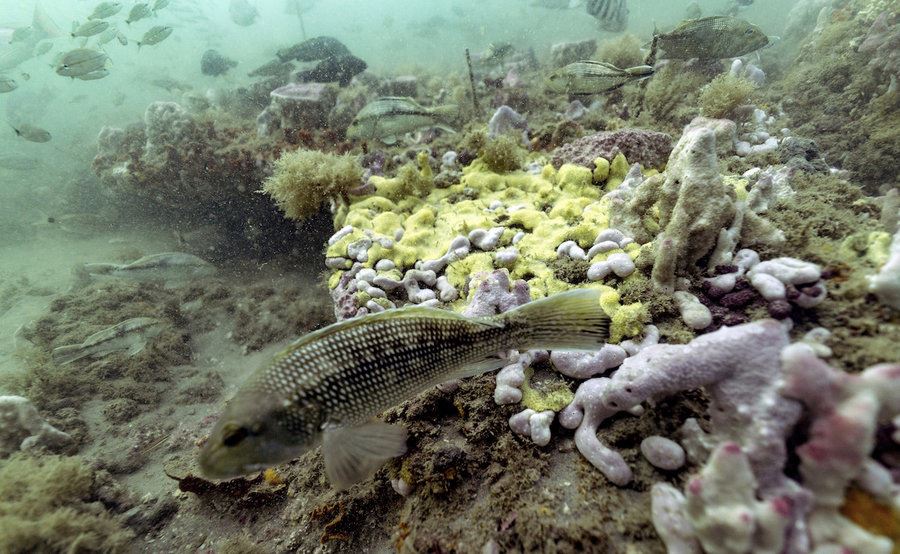 A black sea bass swims along the reef in Gray’s Reef National Marine Sanctuary on Oct. 28, 2019 off the coast of Savannah, Georgia. Gray’s Reef is one of a number of ocean conversation sites that have blossomed under governmental protection.David J. Phillip/AP

But dip beneath the surface – go down 60 or 70 feet – and you'll find a spectacular seascape. Sponges, barnacles, and tube worms cover rocky ledges on the ocean floor, forming a "live bottom."

Gray's Reef is little more than a drop in the ocean 19 miles off the Georgia coast, but don't confuse size for significance. In one of his last official acts, President Jimmy Carter declared the reef a national marine sanctuary at the urging of conservationists who said its abundance of life was unique and worth saving for future generations.

For nearly 40 years, the U.S. government has protected the reef, home to more than 200 species of fish and an amazing array of nearly 1,000 different kinds of invertebrates. Recreational fishing and diving are allowed, but commercial fishing and other kinds of exploitation are not.

And Gray's Reef has served as a global inspiration. Following the lead of the U.S., other nations have designated similar sanctuaries and protected areas, which now cover about 6% of the world's oceans – a bonanza for researchers but, more importantly, an important tool for safeguarding the seas.

Doubts remain about how much of the ocean they can truly save. Last year was the hottest on record for the planet's oceans, and protected areas can't slow the biggest source of that warming – increasing greenhouse gases. The federal government says more than 90% of the warming that has occurred on the planet over the past half-century has taken place in the ocean.

That has had dramatic effects in the waters that cover 70% of Earth's surface. Scientists have tied the warming to the rise of sea levels, the disappearance of fish stocks, and the bleaching of corals. The ocean also has become more acidic as humans have released higher concentrations of carbon dioxide into the atmosphere, and that jeopardizes valuable shellfish and the plankton that form the base of the food chain.

The supporters for the protected areas range from sustenance fishermen on the tiniest islands of the Pacific to researchers at the most elite institutions of academia.

"We're not protecting these areas just for ourselves," Roldan Muñoz, a research fishery biologist with the U.S.'s National Marine Fisheries Service, says during a research trip to the reef, "they're for our nation."

On a National Oceanic and Atmospheric Administration expedition to Gray's Reef, the federal research vessel Nancy Foster is packed with scientists conducting research on subjects ranging from whether invasive lionfish are present to how changing ocean conditions are affecting coral species.

Sanctuary research coordinator Kimberly Roberson and other scientists prepare to dive to collect data about what fish can be found in the area, while Craig Aumack, an assistant professor of biology at Georgia Southern University, peers through a microscope at algae.

Mr. Aumack notes that more types of seaweed and tropical species of fish are appearing on the reef as waters warm, like the odd-looking and colorful clown wrasse, a fish native to the Caribbean Sea that was found off the coast of Georgia this summer, most likely pushed hundreds of miles to the north by changing ocean temperatures.

The sanctuary is named after Milton "Sam" Gray, a biologist who studied it in the 1960s and identified it as an ecosystem worth saving – a reef not far from the U.S. coast that teemed with life, especially an "abundance of diversity of invertebrates," Mr. Roberson notes.

Without that designation, the habitat could have vanished due to high-impact industries such as bottom-trawl commercial fishing, which are now prohibited there.

"In some ways, it's a test of what a marine protected area can do for surrounding areas," says Clark Alexander, director and professor at the University of Georgia Skidaway Institute of Oceanography and a former member of the sanctuary's advisory board. "It was sort of an ideal spot to preserve this kind of habitat and make it available for research and recreation."

In the decades since Gray's was established, large and more stringently protected zones have popped up all over the world.

Phoenix Island Protected Area, established in January 2008, covers more than 150,000 square miles off the tiny island republic of Kiribati and has been cited by scientists for bringing back species of fish in just over a decade. And an area nearly twice as large, the Rapa Nui Marine Protected Area, now surrounds Easter Island after its creation in 2018.

Smaller protected areas, such as the 5,000-square-mile Northeast Canyons and Seamounts National Monument off New England, created by Mr. Obama in 2016, also have been established.

Nine years ago, the United Nations Convention on Biological Diversity agreed to the goal of protecting 10% of the world's oceans by 2020. The UN said in 2017 that it was on its way to meeting that target and that protected areas "contribute substantial social, economic and environmental benefits to society" and "provide food security and livelihood security for some 300 million people."

One commonly cited problem with the protected areas is the difficulty of enforcing rules that restrict commercial fishing and other intrusive industries from vast areas where few people ever venture, particularly in developing parts of the world where resources are limited.

Creating new protected areas without reducing fishing quotas won't save species, says Daniel Pauly, a professor of fisheries at the University of British Columbia in Vancouver.

And that is not a small issue, as some estimates say the number of fish in the ocean was reduced by half from 1970 to 2015, with warming oceans expected to add to that loss.

Many scientists believe protecting broad swaths of the ocean simply might not be enough.

Last year, a group of researchers led by University of North Carolina marine ecologist John Bruno published a pessimistic study of the effects of climate change on the world's marine protected areas. Their findings: those areas will warm by nearly 5 degrees Fahrenheit by 2100, destroying species and marine life despite the existence of protections.

Mr. Bruno's study reflects the reality of coral bleaching in places such as the Great Barrier Reef off Australia, which is heavily protected but still vulnerable to the impacts of a warming world.

It's a lesson that illustrates the legacy of Gray's Reef: Protected areas can save pieces of the ocean from extinction, but they can't save it all.

"If it was up to me, we'd protect about 30% of the ocean," Mr. Bruno says. "We're just saying we've got to directly address climate change with emission reduction. There's no way around it."