by Alex from Montvale

"America did not invent human rights. In a very real sense, it is the other way round. Human rights invented America."

James Earl Carter, Jr. was born on Oct. 1, 1924. in Georgia. He was the first United States President to be born in a hospital. During his childhood, he lived on a peanut farm. He helped his dad with the farming and his mother with some of the patients she had as a nurse. The Carter family was poor and had a hard time, with no running water and no electricity in their home.

But he had an upside to his childhood. Carter remembers being inspired by things such as Charles Lindbergh's first trans-Atlantic solo flight, and Amelia Earhart's solo flight across the Atlantic. He was alive for the "Star-Spangled Banner" to be officially selected as the American anthem.

He went to school at the Plains Public School in Georgia. He later attended Georgia Southwestern College and the Georgia Institute of Technology. He also was in the Navy, served as a submariner in the Atlantic and Pacific fleets, became a lieutenant and received the B.S. degree.

In 1946, Carter married Rosalynn Smith, resigned from his position in the Navy and went back to live at his father's farm. He and his wife then made the Carter Warehouse, a company that produced seeds and farm supplies. He was chairman of the school board and the first president of the Georgia Planning Association.

Later he became part of the George State Senate, and then the state's 76th governor on Jan. 12, 1971. He was a very busy man at that point in his life.

Carter began his campaign for president on Dec. 12, 1974. Many people outside of Georgia had never heard of him, so he started campaigning two years early because he wanted people to get to know him. Carter went to Boston, Texas, Minnesota and Hawaii. Many people said he was crazy running for president, but it wasn’t a bad idea to Jimmy Carter.

During this time, he accomplished many things, including many issues dealing with foreign policy. He helped with the Panama Canal treaties, the treaty of peace between Egypt and Israel, the establishment of U.S. diplomatic relations with the People's Republic of China and a treaty with the Soviet Union. He also championed human rights throughout the world.

After leaving the White House, Carter became a professor at Emory University in Atlanta, and founded the Carter Center there. He and his wife became volunteers for Habitat for Humanity, a non-profit organization that helps people build homes for needy people in the United States. Carter now teaches Sunday school and is a deacon in the Marathon Baptist Church of Plains, Ga. He has written 12 books.

Some of the things Carter enjoys most are fly-fishing, woodworking, cycling, jogging and tennis. Some of his favorite sports are basketball, baseball, bowling, and hunting, fishing and motorcycling.

Many think a hero is a person who saves lives or stops crime, and that can be true. I think Jimmy Carter is a hero because he overcame many difficult things during his childhood. When he became an adult, he helped many people and was involved in things he once didn't think were possible. When he was a child, no one thought he would become anyone big in life, but he proved them all wrong. He was a senator, a governor and even the President of the United States of America. Now think a minute: how could a peanut farmer become a person so big in people's lives? The only answer I can give is hard work and determination. And these are very good traits for a hero. His actions have saved lives, stopped crime and helped people in need around the world.

Jimmy Carter showed me that you can start out with very little and become someone very big. I also learned that if you work hard and have determination, you have a good chance of achieving your goal. That is why I think Jimmy Carter is a hero.

The Carter Library
The Carter Center - is a non-profit public-policy center founded by Jimmy and Rosalynn Carter to fight disease, hunger, poverty, conflict and oppression around the world.
The Jimmy Carter National Historic Site
Habitat for Humanity International - brings families and communities in need together with volunteers and resources to build decent, affordable housing.
Academy of Achievement - Read an interview with Jimmy Carter. The Academy of Achievement brings students face-to-face with the extraordinary leaders, thinkers and pioneers who have shaped our world. 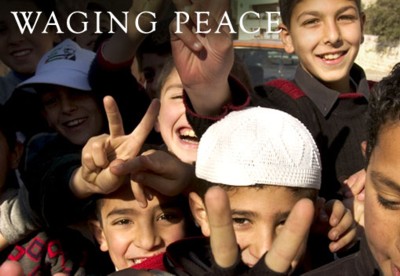 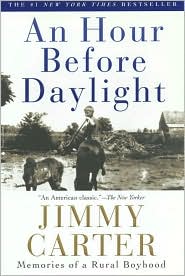 An Hour Before Daylight: Memories of a Rural Boyhood
Jimmy Carter

Jimmy Carter and I have some other things in common, too. We both love the song Amazing Grace. Both of us love to read and our favorite gift is to receive a book. We both love pancakes, cornbread, fruit and vegetables. But Jimmy Carter's favorite meat is steak, and mine is ribs. We both like sports, but mine is martial arts, and his are basketball, football and tennis. We both love to watch baseball games. Best of all, we both like to talk about God, and we both hope for a better future. We both believe that children are an important part of the future and that their rights always should be respected and protected.

My hero is Jimmy Carter, the 39th President of the United States. He initiated peace talks between Middle East enemies, Egypt and Israel in the 1970s, pardoned draft evaders from the Vietnam War, builds houses for the poor, and is a lifelong advocate of human rights for all people.

My hero is Jimmy Carter. He is the greatest former president ever, in my opinion. He knew that there was much more he could contribute to the world, and he recognized that he didn't have to be president to accomplish his goals. From his work for Habitat for Humanity to his peace efforts in the Middle East, he has been a role model. He became my favorite hero the day he saved the U.S. and Haiti from a military conflict. He understands that no injustice is worth the destruction of war, which endangers the lives of those who do not control the situation.