Are humans inclined more for conflict or cooperation? One hopeful answer may be found in the collaborative Israeli-Palestinian response to the coronavirus, as both sides rise above politics.

MARCH 11, 2020 - TEL AVIV, ISRAEL - For years, cooperation between Israelis and Palestinians has been in retreat, as peace negotiations became a remote prospect, governments focused on mutual demonization, and President Donald Trump cut support for the Palestinian Authority. 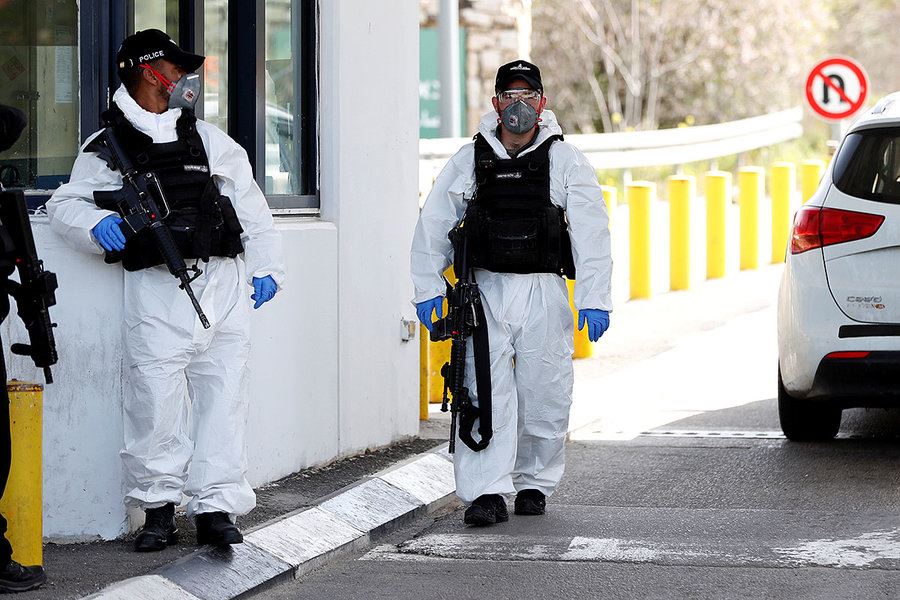 Israeli border policemen wearing protective gear as a precaution against the coronavirus guard at an Israeli checkpoint in the occupied West Bank on the outskirts of Jerusalem, March 11, 2020.Ronen Zvulun/Reuters

The coronavirus pandemic, however, has forced the sides to put recriminations on hold and instead work together to save lives.

Despite decades of arguing over where to draw a border, the spread of COVID-19 has highlighted how Israel and the Palestinian areas in the West Bank are in fact one unit in the battle to preserve public health. Handling the challenge requires the sides to collaborate and resist the tendency to focus first on the political.

“In the end, this isn’t something related to politics. This is something human, for the benefit of everyone,” says Mariana Alarja, chief manager of the Angel Hotel in Beit Jala, next to Bethlehem, where dozens of Palestinian coronavirus patients – including herself – are staying in quarantine.

As of Tuesday, 29 Palestinians in the West Bank have been diagnosed with the virus. An emergency was declared there last week. COVID-19 tests from Palestinians were sent to laboratories at Israel’s Sheba Hospital outside Tel Aviv for analysis because the facilities don’t exist in the West Bank. After years of Israeli military closures imposed on Bethlehem, the Palestinian Authority (PA) is enforcing its own closure to prevent the virus from spreading to other cities in the West Bank.

“A doctor should help everyone, regardless of race or nationality – whether the patient speaks English or Arabic,” says Ms. Alarja. “It doesn’t matter if you are an Israeli or a Palestinian, we all have to work on this very quickly.” 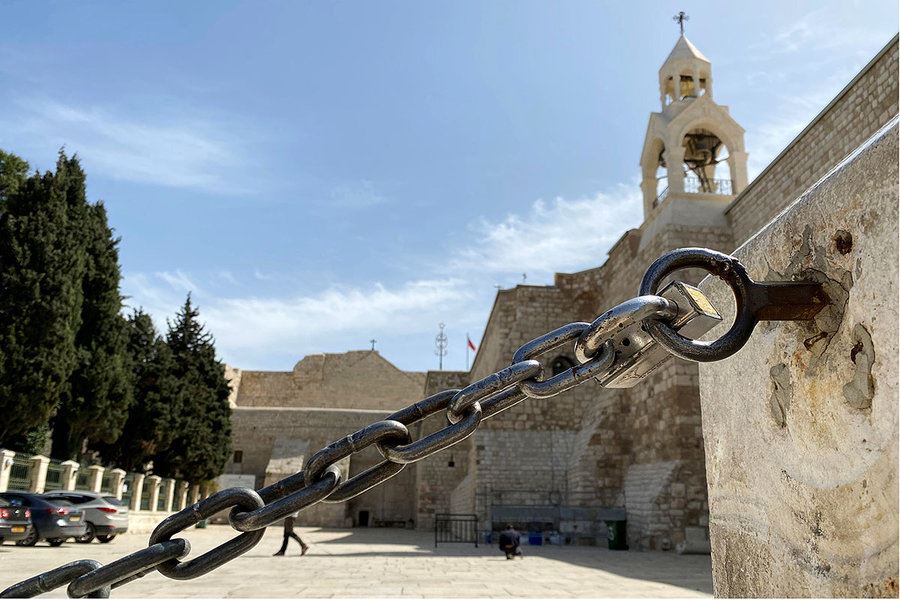 An entrance to the Church of the Nativity is seen locked amid coronavirus precautions, in Bethlehem in the Israeli-occupied West Bank, March 11, 2020.Mustafa Ganeyeh/Reuters

While any sign of normalization of ties with Israel carries a stigma among Palestinians, Zaher Nazzal, an epidemiologist at An-Najah University in the West Bank city of Nablus, says the cooperation makes sense.

“This is normal. Whenever there’s a crisis that affects the people’s health, collaboration should be possible,” says Dr. Nazzal. “It doesn’t mean you put everything behind you, or that you agree with everything that’s happening on the ground.”

Since the first Israeli was diagnosed with the virus nearly three weeks ago, the outbreak in Israel is showing signs of spiking: The count stood at 77 on Wednesday, after jumping 50% Monday to Tuesday.

Israel has responded by requiring all arrivals at Ben Gurion Airport to self-quarantine for 14-days, and on Wednesday banned gatherings of more than 100 participants in closed spaces. Tens of thousands are already in isolation. The country has closed its border with Egypt, and both Israel and Jordan have restricted traffic on their border. 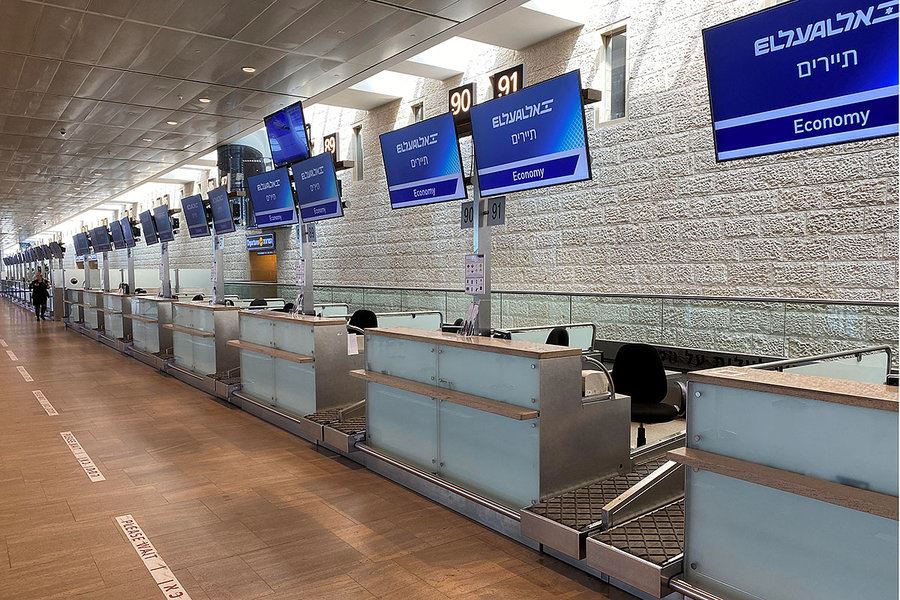 The collaboration on the coronavirus includes the health ministries of both governments along with the Israeli military liaison. Israel in recent days delivered 250 virus test kits to the West Bank and held training sessions for Palestinian medical workers on how to protect themselves. Israel’s Civil Administration, the military-run authority in Palestinian areas of the West Bank, promised to supply medical equipment and training as needed.

“Viruses and epidemics don’t stop at the border, and the spread of a dangerous virus in Judea and Samaria could endanger the health of Israeli citizens,” Dr. Dalia Basa, health coordinator for the military administration, said in a statement, using the biblical terms for the West Bank. Helping the PA fight the virus “is both in the interest of Israel and of the highest humanitarian significance.”

In practice, a border between Israel and the Palestinian territories barely exists. Hundreds of thousands of Palestinian laborers from the West Bank commute daily to jobs in Israel. Palestinian residents of Jerusalem also cross Israeli checkpoints into the West Bank.

Because Israel and the Palestinian areas are effectively one territorial unit, the discrepancy between the two public health systems figures as a major challenge to containing the outbreak, say experts.

“Israel has the stronger economy and the stronger health system. It has not only a moral obligation but a self-interest to help all its neighbors. Given the seriousness of the crisis, there’s an urgent need for much greater cooperation,” says Gidon Bromberg, Israeli director of EcoPeace Middle East. 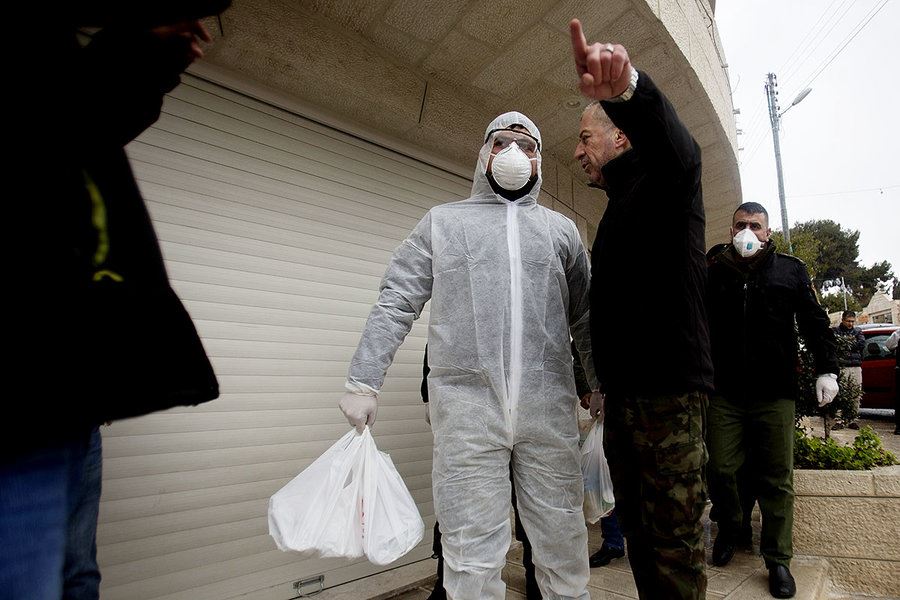 A Palestinian policeman delivers supplies to hotel staff who tested positive to the coronavirus in the West Bank city of Bethlehem, March 6, 2020.Majdi Mohammed/AP

“Should the PA, Jordan, or Egypt request emergency hospital facilities to be set up,” he says, “Israel should be ready to respond like it responds to earthquakes in other parts of the world.”

Public health threats have spurred cooperation among rivals on other maladies. A year ago, the “vaccine diplomacy” of international organizations prompted Afghanistan and Pakistan to introduce all-age polio vaccinations to travelers at their joint border to combat that virus in the violence-wracked region. And Cold War era vaccine diplomacy between the U.S. and the Soviet Union helped eradicate polio and smallpox in much of the world.

Israelis and the Palestinians have cooperated on health before. Some 15 years ago, the Israeli, Palestinian, and Jordanian governments established an organization to promote joint public health initiatives – the Middle East Consortium on Infectious Disease Surveillance. The organization sponsored joint epidemiological training for doctors and nurses and promoted research collaboration and a regional network of public health professionals.

Those professional connections still exist, but Israeli-Palestinian government cooperation became nearly nonexistent as political ties eroded, says Nadav Davidovitch, director of the School of Public Health at Ben Gurion University and one of the founding members of the consortium.

“On both sides, people on the ground really want to collaborate in spite of the political situation,” says Dr. Davidovitch. “It’s part of a shared goal of public health.”

That goal was made more difficult to achieve after the Trump administration cut funding for joint Israeli-Palestinian research projects under a program that promotes Israeli collaboration with its Arab neighbors.

Ikram Salah, a Bethlehem resident who did doctoral studies under Dr. Davidovitch, had a joint epidemiological research project cut off by USAID under the Trump administration. She acknowledges that the public health infrastructure in the Palestinian territories is limited, but says it’s due to Israel’s military occupation of the West Bank.

“I’m always saying that disease knows no borders,” she says. “As a Palestinian, it’s hard to say, but we are not independent. We are dependent on Israel in all sectors.”

Despite the collaboration in the West Bank, however, there is serious uncertainty about what would happen should the pandemic spread to the Gaza Strip, where some 2 million Palestinians live under military blockade in cramped conditions with woefully inadequate infrastructure. Israel has no direct relations with Hamas, the Islamic military group that rules Gaza.

Though there is a hard border between Israel and Gaza, there’s still traffic back and forth. Military officials reportedly consider an outbreak there a nightmare scenario that will have humanitarian and geopolitical fallout for Israel, as much of the world still holds it responsible for the situation there despite its 2005 military withdrawal.

Gaza is not sterile. It will enter Gaza at some point. It has to,” says an Israeli health official who asked not to be named. “It’s one of the most densely populated places in the world. It will burn through Gaza very quickly, I’m afraid.”

In such a scenario, the World Health Organization would have to intervene to help coordinate efforts between Israel, Hamas, and the Palestinian Authority. For the time being, however, Israel and the Palestinians are focusing on handling the West Bank.

“This is being done because we don’t have another choice. We have to work together,” says Dr. Itamar Grotto, associate director-general of Israel’s Health Ministry. “If you are looking for a positive effect of this event, you could point to this.”

Find more Community Heroes on The MY HERO website