‘Hope to move forward’: One refugee’s story of resolve

When we think of refugees, we often think of hardship, loss, and dependency. Tasmida’s story challenges that perception and underscores the talent and spirit refugees bring to their new homes.

JUNE 20, 2019 - NEW DELHI - There was a point in Tasmida’s decade-plus-long odyssey from persecution in Myanmar to a cramped, stifling refugee camp along a sewage ditch in southeast Delhi when the aspiring human rights lawyer almost gave up. 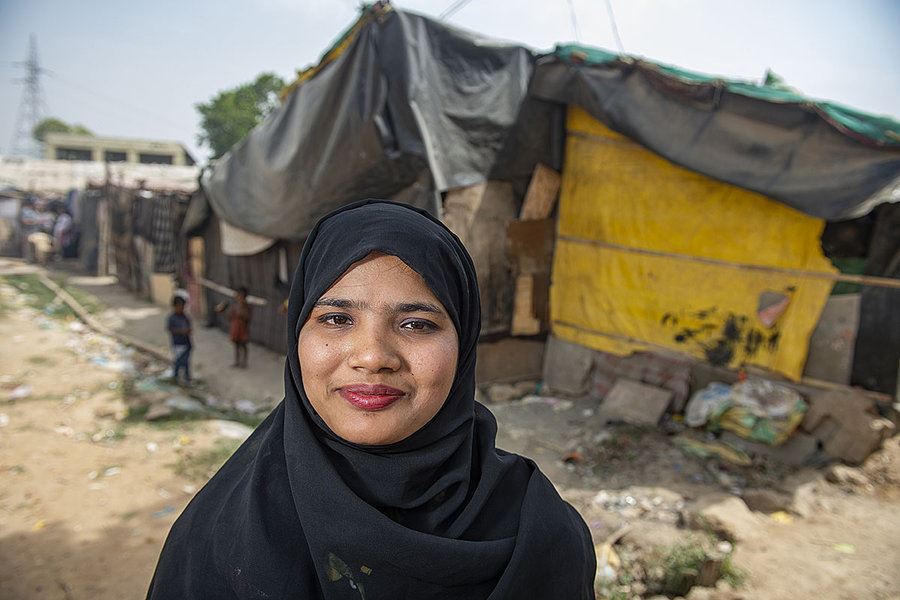 Tasmida, seen here in the Rohingya camp where she lives in the Kanchan Kunj neighborhood outside New Delhi, will soon be the first Rohingya refugee to enter college in India. She dreams of becoming a human rights lawyer.Ann Hermes - The Christian Science Monitor“After we arrived in Delhi there was a time when I felt no hope. I didn’t know Hindi, and the situation seemed very difficult,” says Tasmida, who arrived with her family in Delhi’s Rohingya refugee community from Bangladesh in 2012. “But then I remembered that getting my education was the only way to improve our situation here and one day help our country. Then I felt sure again, and I had hope to move forward.”

That hope, and a determination honed by a decade of overcoming obstacles – from learning new languages and surviving a devastating refugee camp fire to facing rising anti-refugee sentiments – have paid off.

In May, Tasmida became the first Rohingya refugee in India to pass the admission exams for university education – a make-or-break step for fulfilling the dream of one day practicing international human rights law.

“In one way I feel very happy” about this accomplishment, says the young woman who goes by her first name and has no other name on her registration with the Office of the United Nations High Commissioner for Refugees, or UNHCR. “But I also feel bad: We are many Rohingya refugees in India, and many have been here longer, so why haven’t others had this opportunity before now?”

The new face of refugees

Tasmida is one of an estimated 40,000 Rohingya – a Muslim ethnic minority the Myanmar state does not accept as citizens – who are making India a tenuous home. 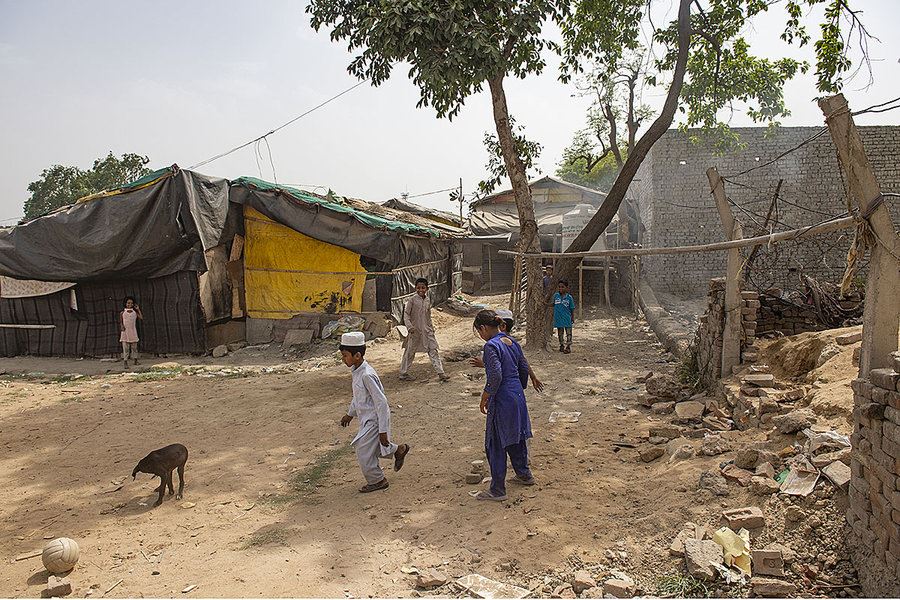 Children play outside at a Rohingya refugee camp on June 15, 2019, in the neighborhood of Kanchan Kunj, outside New Delhi.Ann Hermes/The Christian Science MonitorAnd she is just one of the more than 70 million displaced people around the world, 26 million of whom are refugees. They include roughly 6 million Syrians and more than 2 million South Sudanese displaced by their countries’ civil wars, 4 million Venezuelans who have fled their country’s collapse, and more than 1 million Rohingya who, like Tasmida’s family, have been forced out of Myanmar.

The figures for the world’s displaced, released this week as part of UNHCR’s annual report, are the highest in the UN agency’s almost-70-year history. The number of refugees alone is estimated to be up more than half a million over 2017.

Yet while the international image of the refugee may often be one of hardship, loss, and dependency, Tasmida’s story challenges that perception and underscores the talents and spirit that refugees contribute to their new homes.

As the international community observes World Refugee Day Thursday, Tasmida’s story is also a reminder to the home countries that refugees have fled of the wealth — in human spirit, talent, and entrepreneurship — that those countries have lost.

Indeed, this year a number of international organizations and cultural institutions are highlighting refugees as contributors rather than a burden to the human family.

The Metropolitan Museum of Art in New York is featuring art by refugees while shrouding a work by one-time refugee Marc Chagall, to symbolize how the world would be a poorer place without refugee artists. 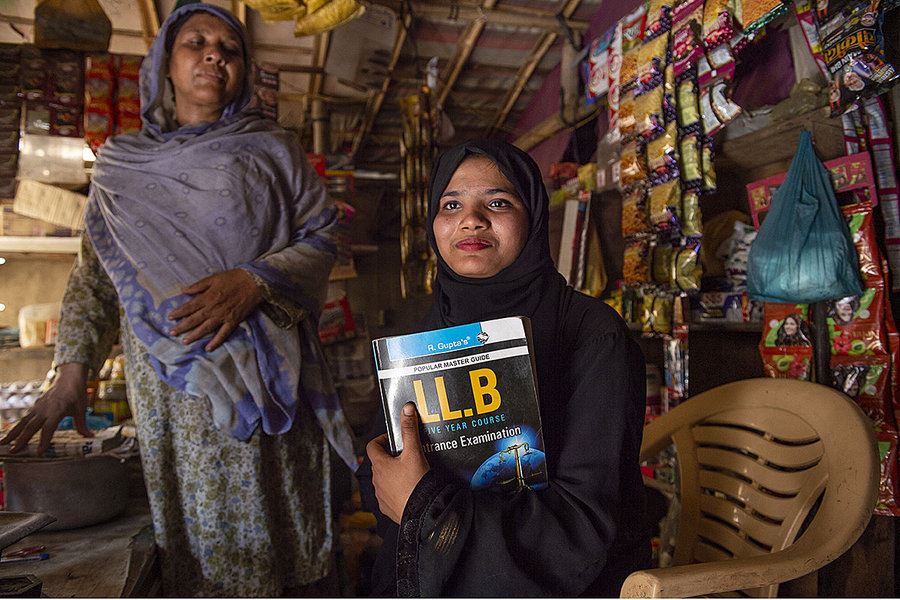 Tasmida, a Rohingya refugee from Myanmar, holds a law study guide in her family's shop with her mother, Amina (l.), inside the Rohingya camp where they live in the neighborhood of Kanchan Kunj, outside New Delhi.Ann Hermes/The Christian Science MonitorThe Tate will use its four galleries across the United Kingdom to showcase works by artists who fled conflict and persecution.

And the International Rescue Committee, a global organization that responds to humanitarian crises with the goal of helping people rebuild their lives, has turned its celebration of this year’s World Refugee Day into a multimedia thank you to refugees, including Albert Einstein, Elie Wiesel, and Freddie Mercury, for their contributions to the world.

Tasmida, a modest young woman who favors a black abaya and speaks softly, would never think to place herself in a league with Einstein. And yet in her own small way, she has demonstrated that she knows not just how to take advantage of the opportunities presented to her, but also how to give back.

She has inspired other girls at Hope’s Flight, the nonprofit she frequents in Delhi’s Kanchan Kunj neighborhood, an after-school study and empowerment program sponsored by the Texas-based Children’s Emergency Relief International (CERI). The program aims to give Rohingya children a leg up (by learning Hindi, for example) and keep them in school.

Following in Tasmida’s footsteps, other girls at the one-room Hope’s Flight center have recently passed exams allowing them to move on to higher grades.

At her home constructed of bamboo poles, castoff wood, cardboard, plastic sheets, and tarps in the 50-family Rohingya refugee camp in the Kanchan Kunj neighborhood, Tasmida shows her friend Zuara her thick law studies book, the title “LLB” emblazoned on the cover in giant letters.

Just a day ago Zuara, another Rohingya refugee pushing forward in India, received word of her acceptance to move on to grade 11.

“We see a lot of intelligent kids here, but the way Tasmida has not just focused on her own studies but has nurtured the others is really remarkable,” says Nadeem Khan, an early-childhood education graduate student working at Hope’s Flight.

The details of Tasmida’s 15-year trek from Myanmar, through Bangladesh, to India, where she is now preparing to enter university in New Delhi, make her journey and her desire to contribute all the more remarkable.

Tasmida was a young girl in Myanmar when her father, a businessman with a small hotel and a river transport service, began experiencing repeated shakedowns and detentions at the hands of police. With abductions of Rohingya women increasing, her father decided Myanmar was no longer safe for his family. In 2005, they left for Bangladesh.

In the coastal city of Cox’s Bazar, Tasmida settled in to learning Bangla to go to school. But by 2012, with more Rohingya pouring into Bangladesh and conditions for refugees worsening, Tasmida’s father decided once again it was time to move, this time to India, where the family had contacts in the New Delhi Rohingya community.

For Tasmida, another move across a national border meant another language to learn if she wanted to stay in school. But Indian schools wouldn’t admit her because she lacked Hindi and necessary documents. Her neighbors scoffed at the idea of a poor immigrant girl staying in school.

That is when Tasmida almost decided the obstacles were just too much. She dropped any effort at learning for six months. But then she had something of an awakening.

“I knew our situation was not good, but I also knew that education was the only way to bring change – so how was I helping if I stayed out of school?” she says.

Tasmida’s rekindled determination was met with new opportunities – admission to a local charitable school for girls, Hindi classes through UNHCR, CERI’s after-school and empowerment program in her neighborhood. Even a fire last October that destroyed her refugee camp, including her family’s home, did not dampen her spirit.

Her law textbook under her arm, India’s first Rohingya college student says her dream is to return someday to Myanmar as a human rights lawyer.

In the meantime, she has a message for the millions of young refugees like her around the world: “Problems will come, but don’t stop anyway,” she says. “And when an opportunity comes, don’t wait. Grab it.”