For more than 80 years, a statue of the famous husky Balto has stood proudly in New York's Central Park. The image is of a solitary sled dog, but the effort to rush a lifesaving serum to save the children of Nome from a deadly epidemic took the efforts of many.

It was late in the year 1924 and residents of the small city of Nome, in the U.S. Territory of Alaska, had settled in for the winter. Most of the 20,000 people who had come to seek their fortune in the gold rush were long gone. Still, its nearly 1,000 European settlers and about 450 Inuit natives made Nome the largest city in the northern part of the territory.

Nome was an outpost even in summer, but, by November, ships had to leave the harbor or risk becoming icebound on the frozen Baltic Sea until July. No roads have ever led to Nome and, back then, bush planes were still a thing of the future. The only way to get anything in or out of the city was through the mail route which, in winter, was traveled only by dogsled.

In December, shortly after the last ship had left for the year, a two-year-old Inuit child from a nearby village became ill. Nome’s doctor, Curtis Welsh, diagnosed it as tonsillitis, a disease that is not usually life threatening, but the child did not survive. Throughout the rest of December, an unusually high number of illnesses were diagnosed as tonsillitis and two more children died. It was late in January when a fourth child fell victim and, this time, the symptoms were obvious. Welsh discovered the true identity of the disease, diphtheria.

Diphtheria is an extremely contagious and potentially deadly disease that affects the tonsils, nose, throat or skin. The most likely victims are children under the age of 10. Welsh knew the situation was serious. Six years before, a flu epidemic wiped out half of the native population of Nome and nearly one eighth of the native population of the Alaskan territory. Since diphtheria bacteria can live for several weeks outside the human body, this disease presented an even greater risk.

There was an antitoxin available which was used to treat diphtheria. Without it, the disease was usually fatal. Welsh’s supply of antitoxin had expired and the new shipment he ordered had not arrived before the port closed. The town sent word, by radio, that the people of Nome needed 1 million units of the antitoxin to stop an epidemic and save the children of Nome and the surrounding areas.

The closest antitoxin was 1,000 miles away and the options for transporting it were few. The only airplanes in Alaska were old WWI biplanes with open cockpits and water-cooled engines, which were not safe to fly in harsh weather. The best way to bring the much needed serum was by dogsled. The Board of Health decided to try a dogsled relay using two teams. One team would start in Nenana, which was as far as the serum could be sent by train. The other team would start in Nome. The two would meet in Nulato and the serum would be carried back to Nome. Twenty mushers and 150 dogs would travel day and night across the frozen Alaskan mail route, following rivers, crossing plateaus and navigating through forests.

Before the serum train arrived in Nenana, 20 more children were diagnosed with diphtheria and 50 more were at risk. On January 27, the first musher, “Wild Bill” Shannon, met the 9 pm train to pick up the 20-pound package carrying the canister of serum. He covered the canister with canvas and fur and quickly took off with his team of 9 dogs toward his stop at Tolovana. The temperature was -50 degrees (Fahrenheit) and dropping. Shannon ran next to the sled to keep warm. When he found part of the trail destroyed by horses, he was forced to travel on the colder ice of the river. By the time he reached his destination, at 11 am, Shannon had developed hypothermia and parts of his face were black with frostbite.

Edgar Kallands was next in the relay. He warmed the serum in the Tolovana roadhouse before heading out into the forest. According to reports, when Kallands arrived at his destination, Manley Hot Springs, his hands were frozen in place on the sled’s handlebar. The roadhouse owner had to pour hot water over his hands to free them.

A famous musher, Leonhard Seppala, of Norway, was chosen to cover the most dangerous leg of the run, from Nome to Nulato, to intercept the serum. Seppala was a legend in the world of dogsled racing and had won the All-Alaska Sweepstakes three times. He had previously made the trip to Nulato in four days, breaking all records. When Shannon and his team were leaving the train station in Nenana, on January 27, Seppala and his team took off from Nome, heading into an oncoming storm.

Unlike most mushers, Seppala used two lead dogs. One of them, Togo, was as well-known as Seppala and praised for his intelligence, leadership and keen instincts. The other, Fritz, was Togo’s half brother and equally respected for his good trail sense.

Newspaper headlines in the nation’s largest cities flashed updates on the crisis and the progress being made. People across the United States sat by their newly acquired radios, listening to the story unfold. They mourned as the disease claimed yet another life and cringed when gale force winds forced temperatures along the trail to -85 degrees (Fahrenheit).

Seppala and his team encountered those extreme winds as they traveled across the frozen Norton Sound toward Shaktoolik. Visibility was so poor, Seppala did not realize how far he had gone and nearly missed musher Henry Ivanoff. Ivanoff's dogs had crossed paths with a reindeer and he was untangling his team when he saw Seppala getting ready to pass him. Ivanoff caught Seppala's attention and handed him the serum.

Seppala and his team headed back across the treacherous open ice of the Norton Sound. The solid sheet they had crossed a day earlier had broken up and cakes of ice were threatening to come loose. The team ran close to the shore, where the ice was cracking and water spurted up through the holes. Togo navigated around the weak spots and several times rushed toward the shore to safety.

They had traveled four and a half days and covered 260 miles with less than five hours of rest when they reached an altitude of 5,000 feet crossing Little McKinley mountain. Three hours later, at the roadhouse in Golovin, Seppala passed the serum to musher Charlie Olsen. It was 3 pm on February 1.

The blizzard was growing stronger and Welch and the local health board put out an order to stop the relay until the storm passed, for fear of losing the serum. The lines of communication went dead, however, before the message could reach most of the mushers. Only the roadhouses at Solomon and Port Safety got word so the race to save the children continued.

Olson’s leg of the trip was 25 miles long. When a gust of hurricane force wind blew his sled off the trail, he landed in a snow drift. Olson had to dig his way out and untangle his 7 dogs. He nearly lost his fingers to frosbite when he exposed his hands in order to put blankets on his team. At 7 pm he arrived at the roadhouse in Bluff.

With the snow swirling violently outside, Olson urged musher Gunnar Kaasen to hold off until the weather subsided. The snow and winds did not cooperate. Kaasen feared, if he waited too long, drifts would make the trail impassible and, at 10 pm, he headed out to face the blizzard.

Kaasen was a colleague of Seppala’s from the racing days. His lead dog, Balto, was not as experienced as most, but Kaasen had strong faith in him. A dog’s sense of smell is more than 600 times as strong as a human’s and Balto kept his nose to the ground, following the scent of the trail. He led the team through a storm so blinding that Kaasen often had to guess at their location. At times, he could not even see the dogs closest to his sled.

He was two miles past Solomon before he realized he’d missed his stop. Soon after, a sudden gust of wind flipped the sled, burying Kaasen in a snow drift. While setting the sled upright, he realized the serum canister had been thrown from it. He crawled around in the dark, using his bare hands to search for the canister. Despite frostbite on his hands, he found the lifesaving serum.

The roadhouse at Port Safety was dark when Kaasen arrived at 3 am. Musher Ed Rohn had gotten word the race was halted and was asleep. Kaasen didn’t go inside. He knew it would take precious time to get another team of dogs ready and he was confident his team would make good time on the last 20 miles to Nome. At 5:30 in the morning, on February 2, Kassen and his team pulled onto Nome's Front Street with the serum. Not a single vial was broken. A few hours later it was thawed and ready for use. The children of Nome were saved. A second serum relay, using some of the same mushers, arrived two weeks later.

President Calvin Coolidge gave letters of commendation to the mushers, and the U.S. Senate officially recognized their efforts. They also received $25 each from the Alaskan Territory and letters filled with praise from children.

The dogs, also, received their well-deserved honors. Several had perished in the run, from frostbite and exhaustion. A statue of Balto, by artist Frederick Roth, still stands in New York’s Central Park, after being unveiled in December of 1925. Antarctic explorer Roald Amundsen awarded Togo a gold medal. 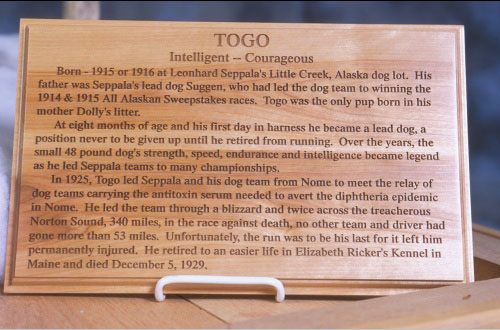 Today, diphtheria is rare. It is also preventable, due to the efforts of health officials who have been immunizing children against the deadly threat of diphtheria for decades. The mushers and their dogs were true heroes as were the many others who used the event as a springboard for a campaign to innoculate people all over the world.

1925 serom run to Nome (the Great Race of Mercy) - Wikipedia