by Wendy Jewell - MY HERO Staff - from Canada

The artistic photographer and poet Ilse Bing was born on March 23, 1899, in Frankfurt, Germany.

She grew up in a family in which arts and sciences were venerated. Known in Europe and New York in the 1930s and '40s as "The Queen of the Leica," her poetry and images stand the test of time. 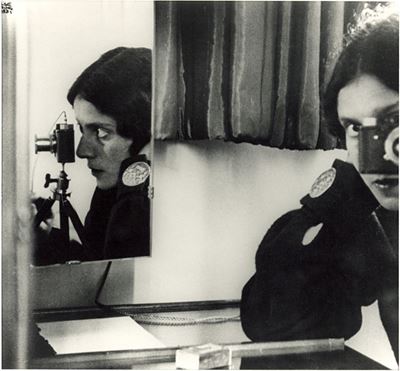 Ilse Bing, "Self-portrait with Leica." Fair use via Wikimedia Commons.

Some of the poems included in this tribute to Ilse were from a collection entitled SNAPSHOTS WITHOUT A CAMERA, which was published to celebrate the ninetieth birthday of the poet by her friends and admirers.

When I was a little girl, children were looked upon as, "not yet" - something not yet perfect. I resented this approach toward me. But I was no fighter, and I retreated into my own world. This world was so colorful and so rich that I wanted never to become a grown-up.

Yet, I had to grow up. This childhood experience, however, stayed with me. It helped me see and understand life in a much greater variety and depth. It made me respect all children as persons complete in themselves, as persons who had to find their own way, with ideas and inner struggles as valid as those of grown-ups.

On the other hand, I found out that grown persons are no more secure, no more free than children. Fundamentally, even if in a different way, they confront the same problems, they are filled with the same hopes, the same anguishes and joys, ...their deepest possible insights go in the same direction...

Ilse Bing died on March 10, 1998, just short of her 99th birthday, and celebrations in honor of her work took place throughout the year.

"...what a strong, creative force. Her passing will more than likely mark her spirit's last incarnation in this realm. She has gone on to loftier dimensions to accomplish even greater feats of love and creativity. She will be missed, but not forgotten.

"Ilse Bing is my poet hero. Her life and her words have inspired me to follow my dreams."

"When I first met Ilse, her husband, Konrad Wolff, was beseeching me to rescue her from the very strong undertow off the shore of Tobago. At the age of 80, she was diving for precious pieces of coral with the sea smashing around her undaunted will. We became fast friends. Ilse has given me and those lucky enough to discover her, a reason to believe, to hope and to expect miracles."