How Should We Choose a Hero?

by The Reverend Charles F. Harper

How should we choose our HEROES?

We human beings are entrusted with a very special place in creation. A place that calls us to embrace and live by certain values including kindness, generosity, forgiveness, joy, peace and so on. Heroes help us define, develop and live by those values. Without such examples we can be led to embrace false values and the balance of creation is lost; the teeter totter totters and all can become chaos and disharmony.

The ancient Greeks said, "Tell me who you admire and I'll tell you who you are." According to this logic the choosing of heroes, therefore, is a very important thing. Because who you choose as a hero often determines the character of a person and a people. The greatest conquerors in history knew this. Replace the Dalai Lama with Mao and you have a subsidiary of China. Replace the Czar and Czarina along with the icons of the Russian Orthodox Church with Lenin and you have Soviet Union. All of them knew that to deprive a people of a hero or the opportunity to choose one is the ultimate form of conquest. All of them knew if you take away a culture's heroes you have conquered them one and all.

Judging by the fanfare of television programs, magazines, movies and tell all biographies and autobiographies, it would seem that heroes are in short supply. Yet, we are in need of heroes more than ever. Collectively and individually we continue to be a people in search of sages; anxious and eager to find people worthy of our love and loyalty.

What kind of HEROES should we embrace?

The question is not whether or not we need or should have heroes, we are a hero hungry people, the question is what kind of heroes should we embrace? When we embrace the "wrong" kind of hero this has the potential of fracturing the sacred bonds of society. When absent of positive heroes, a society will choose others as it did in Nazi Germany and Serbia. The choice of the wrong heroes, then, sets in motion a negative energy more powerful than nuclear fission. The wrong choice of heroes can split the nucleus of the human family and can set off a veritable chain reaction of sexism, racism, hate, violence, greed, jealousy, resentment and corruption.

During the 2000 baseball playoffs, a pitcher threw a ball, the batter took a swing and his bat broke into a dozen pieces. One of the pieces came precariously close to the pitcher. The pitcher picked up the piece and threw it at the batter. Now you couldn't hear it, but you know the argument that took place. The batter took a few steps toward the mound, the umpire ran to get between the batter and the pitcher and the benches and bullpens emptied. And everyone was jumping around as if they had a bee in their baseball bonnet. The pitcher said "I was just trying to get the broken bat off the field." And the batter said, "He was just trying to knock me back to Queens." Wouldn't it be nice if the pitcher had gone up to the batter and said, "Gee I'm sorry. I just got carried away. I'm so excited about being in the series and about being so close to winning that I just lost control. Well, I sure didn't mean for it to come so close to knocking you to kingdom come. Let me get you another bat and pitch you another, maybe a slider this time." And wouldn't it be nice if the batter said, "Oh well it's part of the game. Sorry I got so mad. I know this is an emotional time for all of us. But do me a favor can you keep your next pitch away from my head." You know what would happen if that was the conversation that took place? The pitcher and the batter would have become the laughing stock of the league. Maybe the nation. Maybe the world. The facts are that: behavior doesn't matter. Results matter. Winning matters. Outs matter. Intimidating the batter matters. Home runs matter. It's one of the rules of the game of life. And the person with the best record, the most money, the most votes, the most toys, the most fame, becomes our hero.

In today's culture, from rock stars to movie stars, from sports stars to politicians we have substituted celebrities for heroes. Celebrities from whom we expect little and sometimes get less. Celebrities, after all, are a part of our throwaway culture. By definition, they are simply here today and gone tomorrow and replaced by new celebrities. So anxious are we as a culture to find someone we can place our love and loyalty with that we place our love and loyalty from time to time and instant to instant in the riotous parade of the newly famous and the already nearly forgotten. And when we lose them nothing is really lost, for their successors have already taken over the next fifteen minutes of fame. The celebrity can only attract curiosity and imitation of him/her self where the real hero sends us to the source and end of his vision and dreams. This search for heroes is especially true in times of anxiety and uncertainty. And anxiety and uncertainty is a natural and integral part of the childhood and adolescent experience. Our problem is that we often look at celebrities to find out what our values should be and when we do, we don't look high enough.

What is a HERO?

Heroes don't go for the perishable trophies - they go for the imperishable trophies. Their rules and their goals are different. They live and work in the world, but they embrace and live by the eternal values of love, joy, peace, patience, kindness, goodness, faithfulness, humility, self control. While fame, fortune, power et al may come their way, accumulating such is not their goal. A real hero, a hero who deserves biography, autobiography or memoir is someone who may attract attention but directs that attention beyond himself or herself and reflects in their daily lives everlasting values. Heroes help us embrace and aspire to values that we thought we might not be able to live up to.

Where can we find HEROES?

Heroes can be found in the daily stuff of life. They range from parents to teachers from counselors to that unexpected angel who helps you change the tire during a dark and rainy night. They can be found in our religious and historical traditions. They can be found among the unsung activists and brave politicians who have stood above the status quo. As one historian wrote: "No great man lives in vain. The history of the world is but the biography of great men." The history of the world is the biography of great men and women. We'll find heroes in the biographies, sometimes in the autobiographies and memoirs that are written not to create a personality cult but rather in those that reveal lives that have taken us one more step forward toward fulfilling our human potential. The need for an organization that identifies and promotes the values of heroes. Therefore, there is a need for an international organization that identifies, spotlights and promotes past and present local, community, national and international heroes who personify values that strengthen the fabric of the global village in which we live.

The Many Faces of a Hero

Jump to Another Forum 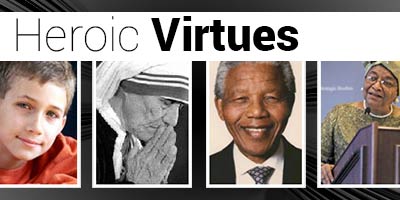 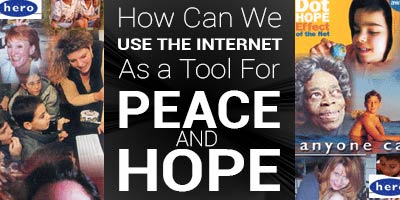 Do you think that the character of a hero is as important as the heroic deed itself?

Anatomy of a Heroic Action

AN ADDENDUM OF VIRTUES

The heroic virtues we've explored in this forum are far from exhaustive. We encourage you to visit The Virtues Project. Here you will find virtues in a flash, literally in a flash card format. The Virtues Project explores virtually every virtue under the sun or in your soul, including:


We invite you to explore the virtues that inspire you and discover how they apply to your own heroic quest.

Please visit the TUTORIALS CENTER for helpful articles and contact information. Found a website bug? Fill out a BUG REPORT. Our team loves hearing from the community and will do our best to provide immediate assistance!