by Richard from San Diego 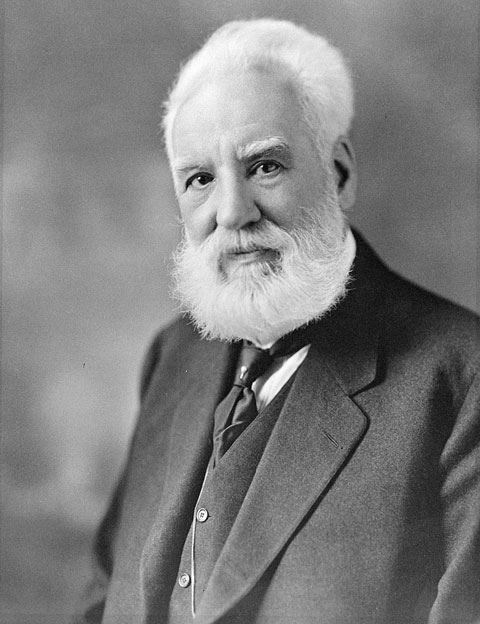 "When one door closes, another door opens; but we so often look so long and regretfully upon the closed door, that we do not see the ones which open for us" ("Alexander Graham Bell Quotes"). This quote comes from the famous inventor Alexander Graham Bell, who believed that if people linger on failure, they will not be able to see the next opportunity for success. Now how did Bell take advantage of this opportunity? To answer this, some background about his life is necessary. Bell was born on March 3, 1847 in Scotland, "to a mother who was nearly deaf and a father who was an expert in speech" (Karam). This conceived young Bell's interest in deafness and sound. Bell is widely renowned for inventing the telephone in 1876, but not many know that "he was also the second president of the National Geographic Society, invented a number of other revolutionary devices, founded the first telephone company, and was a noted humanitarian" (Karam). Bell was always committed to trying to find different ways to contribute to society with his inventions. He truly cared for the deaf: "His most notable scientific work dealt with deafness" (T. Keilor). He also persevered through the challenges life threw at him, such as the race to patent the telephone or the lawsuits he faced, never letting them get the best of him. Alexander Graham Bell's powerful desire to innovate and create inventions that help world; his attentiveness and thoughtfulness towards those with deafness; and his tenacity in his work ethic are what make him a hero today.

Alexander Graham Bell is a hero because he was determined to help people with his inventions, and that eventually led him to achieve his goals and invent what everyone else of that time would deem impossible. Bell's determination really shined through, even after his greatest invention, the telephone, as evidenced when he worked with associates on various projects throughout the 1880s. An example of how Bell showed determination is that even after his greatest invention, the telephone, he invented more devices, "including the photophone, induction balance, audiometer, and phonograph improvements" ("Alexander Graham Bell"). All of these countless inventions show exactly how he continued to work in order to help society. Through his determination, Bell stayed on his path to help the world in any way he could. Another way he expressed his determination to assist others was by widening the scope of his inventions to things other than those related to deafness, such as when he developed "an electrical bullet probe for surgical use. The origin of this effort was the shooting of U.S. President James A. Garfield in July 1881" (Hochfelder). Bell never stopped making new contraptions; instead, he only furthered his efforts to create, including those that served medical purposes that would aid even more people. His benevolent ideas and creations ended up benefiting all of society. This shows his determination to help the world through his useful and life-saving inventions and earns him the title of hero.

Another heroic quality that Bell displayed was that he was caring for those who experienced deafness or hearing loss, and he did everything in his power to ensure that their lives were made easier. An example is seen with his invention of the audiometer, "a device that permits testing hearing acuity in a variety of frequencies. This device allowed for early testing of students' hearing, revealing that many children who had been labeled as 'slow' or 'inattentive' were simply hard of hearing" (Karam). This invention helped people discover any hearing issues in children, which then enabled assistance to be provided. It is yet another example of how Bell cared about all people who had problems hearing, and that he made inventions to make their lives easier. Another way he showed his sympathy for those with hearing loss happened in 1880. When Bell received the Volta Prize, he  "used the prize money to set up his Volta Laboratory, an institution devoted to studying deafness and improving the lives of the deaf, in Washington, D.C." (Hochfelder). Bell cared for the deaf people of the world, and it can be seen through how he chose to use his prize money to dig further into studying deafness, rather than for personal gain. He truly wanted the world to be a better place for those who were deaf. These acts of care toward the deaf community prove how Bell was a hero. 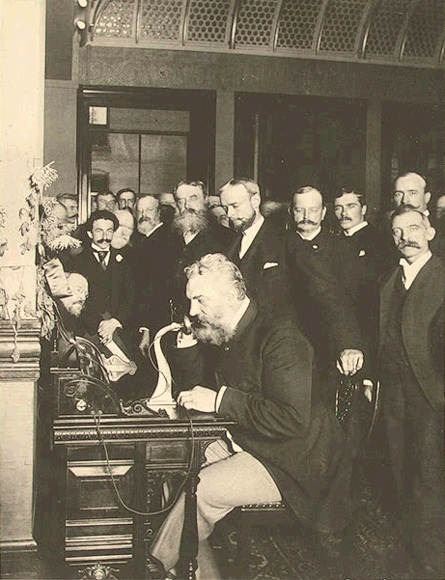 Bell on the telephone in New York (calling Chicago) in 1892Gilbert H. Grosvenor Collection, Prints and Photographs Division, Library of Congress. / Public domainFinally, Bell's perseverance against any setbacks against his goals qualify him as a hero. Bell persevered and never let any setbacks stop him from achieving his goals. By staying persistent, he created inventions that nobody would think of trying to make. A way he expresses his indefatigable will is when "Bell admitted that, had he known more about electricity, he might never have set out to invent the telephone because he would have realized it to be impossible" (Karam). After "a great deal of work and experimentation" (Karam), he succeeded and created the telephone, which connects people across the world today. He overcame this challenge that would have seemed impossible to any other person, which shows the sheer strength of will that makes him a hero. After Bell received the official patent for the telephone, he was swarmed with counter-claimants and infringers trying to get credit for his work. Over a course of years, "the Bell Company was involved in 587 lawsuits, of which 5 went to the Supreme Court; Bell won every case. A convincing argument was that no competitor claimed originality until 17 months after Bell's patent" ("Alexander Graham Bell"). Even after successfully getting the patent, many people claimed to have also come up with his idea, and filed lawsuits against him in all directions. In the end, he kept his original idea legally patented. He succeeded, showing how he had the willpower and determination to get through everything thrown at him. Bell never gave up, no matter how slim the odds were of inventing something new and original, or figuring out the next step to helping the people of the world, and he worked until his goal was accomplished.

Alexander Graham Bell is truly a hero because of his determination to aid society with his inventions, his philanthropic spirit towards the deaf, and his perseverance towards his goals. His determination enabled him to produce a device capable of using electricity to transmitting vocal sounds to other locations, or what is commonly known as a telephone (Bentley). His caring and empathy enabled him to assist those affected by deafness through life-changing devices such as the audiometer. And his perseverance enabled him to conquer a chain of challenges he faced in his life, such as the many setbacks in the creation of the telephone, the race to patent the telephone, and the fight to protect the patent. Even if Bell had never invented the telephone, it is likely that he would still be a notable figure in history because of his other accomplishments (Karam). He did so many things in life that no ordinary person would do, and that inspires others to strive to do the same. "As his friend and sometime competitor Thomas Edison remarked at news of his [Bell's] death, Bell had 'brought the human family in closer touch'" (T. Keilor). He is also inspiring because of the remarkable ideas and inventions he had throughout his life. Even after he died, he is always be remembered as the creator of the telephone, which is used every day by billions across the world. To be determined, caring, and able to persevere through obstacles are qualities Bell possessed as a hero. However, there is one other trait: Alexander Graham Bell, like a lot of other heroes, chose to walk past those many closed doors and failures he came across, and he never ceased to seek an open door that would lead him to success, and, ultimately, to a hero status.