by Lindsey from Palmer, Massachusetts

Click here to listen to the Austin Gutwein story

"It's a problem that most kids think can't be helped, but we can do a little, and that's what a lot of people saw," says Austin about his success. All Austin Gutwein wanted to do when he was in school was make the basketball team. Well he didn't make it and that's just what got him started in his journey.

Meanwhile, Austin had a child pen-pal in Africa who helped him realize that we have more than they do. We're actually lucky enough to have doctors and nurses to cure our sicknesses. In Africa, they have a disease that spreads like wildfire called AIDS. AIDS is caused by a virus called HIV, the Human Immunodeficiency Virus. If you get infected with HIV, your body will try to fight the infection. It will make "antibodies," special molecules to fight HIV. "I know it is a disease that when it gets to parents it kills them, and I feel that pain that the kids feel -- waking up and their parents are dead. (They) are left on their own to care for their many brothers and sisters." There is no cure for AIDS.

This compassionate, 14-year-old boy started to shoot free throws to raise money for the orphans. "I was shocked," says his father Dan Gutwein. "People donated that we never met before!" He raised $3,000 to help, but he knew that wouldn't be enough. So when Austin was 14 years old he started an organization called Hoops of Hope. Austin decided he wanted to build a school. Austin went around the U.S.A. and encouraged kids to shoot hoops to raise money, so he could donate the money they raise to help build a school in Africa for orphans.

"This is something that I realized that if you do just the littlest, littlest thing, you can make a difference, and that's what I'm trying to do," says Austin. This is something that he loves to do and his persistence and energy to help these kids and learn from them inspires people all around the U.S. to help out these orphans. These kids have to walk 7-8 miles just to go to school and we don't even want to get out of bed and ride a bus! These little kids that are 7, 8 or 9 can't walk that far every single day. This school would be an orphanage, housing 450 students and teachers. Some money had been raised, but Austin needed at least $60,000 more to build the school. "I'm not out there to find a cure for AIDS, I'm out there to help the kids who are orphaned by it," he says.

Hoops of Hope is on a mission to help out the kids in Africa and provide care, food, and shelter for them. Last year Hoops of Hope's goal was to raise $150,000 and build a medical testing lab in Sinazongwe, Zambia. Not only did Hoops of Hope participants raise enough money to fund the building of the lab, they also supplied the lab with 1,000 medical caregiver kits. In 2008 they planned to build another medical testing lab in Twatchiyanda, Zambia. 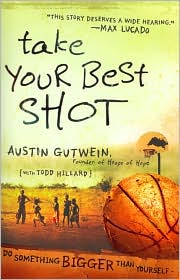 Take Your Best Shot: Do Something Bigger Than Yourself
Austin Gutwein, with Todd Hillard
Related pages