Abigail Disney comes from America’s first family of fantasy. Yes, Ms Disney is one of those Disneys; Cinderella, Snow White, the Little Mermaid, the Disney World of princesses and “happily ever after”. This Disney, however, decided to devote a big part of her life and fortune to real women, women whose lives were more likely to be happily never after. She documents and helps women trying to survive in some of the most brutal, dangerous places on earth—countries at war.

Abigail Disney comes from America’s first family of fantasy. Yes, Ms Disney is one of those Disneys; Cinderella, Snow White, the Little Mermaid, the Disney World of princesses and “happily ever after”. This Disney, however, decided to devote a big part of her life and fortune to real women, women whose lives were more likely to be happily never after. She documents and helps women trying to survive in some of the most brutal, dangerous places on earth—countries at war.

Abigail Disney is a humanitarian, philanthropist, documentary filmmaker and business woman who believes this dark fate for women in war torn countries has been largely ignored and forgotten simply because they are women. Disney says in our times the world of war has changed in a stunning way. 90% of war casualties used to be combatants. According Disney that number has flipped. Now, 90% of the casualties of war are civilians. That means 90% of the dead and wounded in modern wars are mostly women and children, and very little is being done to protect them.

Disney feels the rights of women are the last great cause of this century. She and partner Gini Reticker made a series of documentaries called Women War and Peace for the PBS series Wide Angle. Their films bravely take us to some of the most war ravaged countries on our planet. They tell the stories of women who neither start these wars nor fight in them, but they live the wars nonetheless, and staying alive is not pretty.

Their first award winning film Pray The Devil Back To Hell focused on an extraordinary group who forced the end of the civil war in Liberia. The Liberian war was vicious almost beyond imagination. Before it was over, a quarter of a million Liberian civilians had been killed.

Both sides in the war casually killed and maimed. Many children were kidnapped, drugged, and trained to be lethal little soldiers.

An estimated 2/3 of all the women in Liberia were raped. Soldiers attacked girls as young as 8, and as old as grandmothers.

In Liberia, as in most of the countries Ms. Disney and her partner document, rape is not even a crime. It is the rape victim who is punished-- shamed and ostracized for the rest of her life.

It is against this terrifying violent backdrop that the women of Liberia stood up in protest. The story of the “Peace Women” is the subject of Pray the Devil Back to Hell. These women lived in a country where women had no value, and the men in power had created an endless cycle of death and destruction. Instead of living their lives out in shame, these daring women banded together to protest for peace. When the protest wasn’t enough, the women went on a “sex strike” to deprive the men in their lives until they got change.

Pray the Devil Back to Hell tells the story of their amazing success. 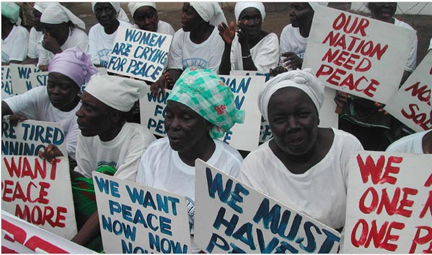 Abigail Disney was so touched by their story, she used her Daphne foundation to help pay for a rickety solar power project in Liberia as well. Rigged up in a rickety way, one village brought light to their school with solar panels, pipes, and old water bottles. Inexpensive and “lo-tech”, the idea has been copied elsewhere to bring other villages out of the dark. Disney has said she still isn’t certain how it works.

Ms. Disney has said that it’s no fun to have people in America hear her name and think only about her money, but she finds giving so rewarding, she now gives all the money her family doesn’t need and gives it to others. She started as a shy mother of four kids, with a dog, a cat, a rabbit and a turtle determined to live forever. She says helping others has changed her to an activist who can speak up loud and clear.

“Bolder”… she says, “is about being out in the world and working with others. I am a far richer person because of it.”

The seven remaining documentaries take viewers to Bosnia, Uganda, Afghanistan, Columbia, and the Congo. The documentaries explore a wide range of issues about women and war. The films shine their own light on how the international community (including the United Nations) has failed women. The documentaries ask why the men who have committed atrocities against women go free? They lay out role women have played—and need to play—to bring about peace.

Perhaps the most joyful project in all the films takes place In the Democratic Republic of Congo. Congo has been called “Africa’s first world war”, because it involves so many neighboring countries. It is the longest, most deadly regional conflict in the world. The number of women raped and killed numbers into the hundreds of thousands.

In a country where many see no hope, Abigail Disney helped fund a program to melt machine guns down into metal to make jewelry. The jewelry making turned women (often ostracized rape victims, chased from their homes) into businesswomen who could support their families.

On one of her blogs, Ms. Disney quotes an activist she met in Congo who told her that the big solution for women is getting the world “to respect the work of the ants, building something huge one tiny twig at a time”. She likens women to the ants, small overlooked, creatures toiling away to sustain and build life in a world blind to the costs of crushing it.

Abigail Disney may have started out one of those tiny ants, but by her own bravery, determination, intelligence and generosity she has become a force of nature. She not only respects the ants, she has made it her life’s work to show us who they are, what they need, nurture and protect them. She long ago left her family’s world of fantasy, but still boldly dares to dream. A princess? Only if it means giving so much of yourself to those who need you.

Pray the Devil Back to Hell - Amazing film by Abigail Disney (Producer) and Gini Reticker (Director)
Wide Angle/PBS - "WIDE ANGLE was created in 2001 as a response to the lack of in-depth international news coverage in the United States."
Women + Film - "Women+Film celebrates the art and cinematic contributions of women filmmakers from around the world in all formats, content, and genre."
The Daphne Foundation - "funds programs that confront the causes and consequences of poverty in the five boroughs of New York City. "

Mighty Be Our Powers: How Sisterhood, Prayer, and Sex Changed a Nation at War
Leymah Gbowee

In "Notes" on the PBS website from Abigail and her Co-Executive Producers,Pamela Hogan and Gini Reticker, they said: "From the onset, we knew that “Pray the Devil Back to Hell” would be one of five films in the series. The question immediately became: what other stories should we tell? All of us had been deeply moved by the U.N. testimony of Patrick Cammaert, a former commander of U.N. peacekeeping forces, when he observed from his own experience in multiple war zones that: “It has probably become more dangerous to be a woman than a soldier in an armed conflict.” So, we decided to focus on the period in which that has happened — the last 20 years, where frontlines have disappeared and civilians have become primary targets."

About the PBS series: The vast majority of today’s conflicts are not fought by nation states and their armies, but rather by informal entities: gangs and warlords using small arms and improvised weapons. The series reveals how the post-Cold War proliferation of small arms has changed the landscape of war, with women becoming primary targets and suffering unprecedented casualties. Yet they are simultaneously emerging as necessary partners in brokering lasting peace and as leaders in forging new international laws governing conflict. With depth and complexity, Women, War & Peace spotlights the stories of women in conflict zones from Bosnia to Afghanistan and Colombia to Liberia, placing women at the center of an urgent dialogue about conflict and security, and reframing our understanding of modern warfare.

Click here to listen to the Abigail Disney story.