by Connor from San Diego 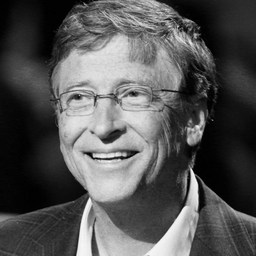 "Most people overestimate what they can do in one year and underestimate what they can do in ten years."(Bill Gates). Bill Gates, the founder of the largest software company in the world and founded one of the world's most productive charities, is my hero. William H Gates III was born in Seattle, WA on October 28, 1955. Bill Gates went to a private school, which is where he worked with a computer for the first time. He went to Harvard in 1973, and dropped out in 1975 to form Microsoft with Paul Allen. They got a deal with IBM in 1980 for the MS-DOS operating system, and Microsoft took off from there. Gates was married on Jan. 1, 1994, to Melinda French, a Microsoft Executive. He continued to work as CEO until he stepped down in 2000. After he stepped down he created The Bill and Melinda Gates Foundation, a charity dedicated to improving the lives of people on a global scale. Bill Gates deserves the title of a hero for improving modern business, communication, and his unmatched donations to charity.

Bill Gates helped make the computer easier to use, improving communication and business efficiency along with it. "Technology has made us more responsive, more able to gain access to information over a broader spectrum. A filing cabinet is just a box of papers; the same information set up on a computer on a network can give you a dynamic sense of your customers." (Joshua Macht). This explains how important modern computers and software that Gates developed is from a business owner's point of view. Microsoft software can run computers, create documents, and prepare presentations among other things that help professionals maintain a high level of productivity. Another area that Bill Gates improved was communication. "For many of us, communicating with family used to mean sending letters and cards through the mail and getting no response until weeks later. For the past decade or so, technology has transformed the way we communicate, in part due to the advent of the Internet. Instead of mailing letters, we're writing e-mails through Windows Live Hotmail that can be sent instantaneously to a recipient." (Jennifer Deleo). As Jennifer stated in How Tech has Changed Our Lives, technology has become an integral way of our lives and how we connect with others, and Bill Gates was at the front of it with Microsoft.

Another way Bill Gates changed the world is through his philanthropy. "He and wife Melinda established the Bill & Melinda Gates Foundation, and their focus is on helping to improve health care and education for children around the world." (Gale Encyclopedia of World Biography) There are numerous issues in the world, but Bill Gates chose to take on World Health and fixing the broken education system. Those issues are the ones that will make the difference in the next generation of children and young adults. Another way that he is trying to change the world is by putting tons of money into various charities and other organizations. "Over their lifetime, Bill and Melinda Gates gave out $30.2 billion, about 37 percent of their net worth to charity."(Lance Whitney) The sheer amount of donations coming from them tell the world that they don't just care about themselves, but that they also care about people in need.

In conclusion, Bill Gates is a deserving hero for his work for uniting the world with computers and his unmatched work in philanthropy. He has been an inspiration because of his success in business and for his ability to empower others. Bill Gates' legacy will continue to influence others for the better long after he is dead. "I have been struck again and again by how important measurement is to improving the human condition." (Bill Gates)