by Kayla from Sydney, Canada

"My heroes are the ones who survived doing it wrong, who made mistakes, but recovered from them."--Bono

Bono is a hero in my eyes because he is in the public eye but he still gets his beliefs across. He is one of my role models. I look up to him because of all the things he does. A lot of people know him as a musician, but to me he is much more than that.

He donates to charities and is trying to make this world a better place. Recently he won the Technology, Entertainment, and Design prize. T.E.D. honor three people each year for this award. The award is a symbol that they have, in some way made a positive impact on this world. A charity that he is active in is The One Campaign. The One is fighting poverty. U2, the band that Bono is a part of, also does charity concerts for different organizations. Some of their songs are about different feelings that they have towards what’s going on in the world. He does so much: he writes songs, he’s a musician, an activist, and he is still there for his family. This includes his wife, Alison Steward, and his four children: two girls, Jordan and Memphis Eve, and two boys, Elijah Bob Patricus Guggi Q, and John Abraham.

Bono’s birth name was Paul Hewson. "Bono" was a nickname given to him by one of his friends in high school. He was born on May 10th, 1960 in Dublin, Ireland. On that day, a hero was born.

Bono has determination as an activist and as a musician. He is determined to help others and to make this world a better place. He not only does that through raising money for charities and helping different people everywhere, but he also does it with music. I think U2’s music is from the heart and it is inspiring. Music helps get messages and feelings across. Bono is really determined to get his message across: he wants people to help support charities and to realize that not everyone in this world has what you have. So many people live in poverty and die from starvation. Bono is trying to help save people from this and I think it is a great thing to do. If everyone just donated a little bit of money and time it would save so many lives.

Bono is not perfect, no one is perfect. That is another reason why I picked him. Some people don’t like him. Some people say that he’s "fake," that he’s trying to be perfect. Really, he’s just doing what he believes in. I don’t believe that he is a fake. I think he truly means what he says and does. People see it as it’s just a musician trying to look good in the public eye. He does a lot for different people and countries. I don’t think he is a perfect person, because no one can be perfect! I just think he is someone you can look up to and see that he is a good role model.

Last but certainly not least, Bono is one of my role models! The reason I see Bono as a role model is because he donates so much time and money to charities. Something important that he does is bring awareness to AIDS in Africa. He is up for a Nobel Prize because of this. He spends so much time with different organizations and still has time to be a great father and husband. I look up to him because someday I hope to be involved in different charities and help the less fortunate. He is also a great musician. I love U2’s music and hope to see them in concert someday. I hope that other people see Bono as a role model too. If there were more people in this world like him, it would be a much better place.

In conclusion, Bono has done many great things. He has been rewarded with different awards for his outstanding accomplishments. Hopefully he has many more accomplishments in the future. I am sure that his wife and children are very proud of everything he does. After reading this, I hope others will realize what he has done and respect him for that. I hope you enjoyed reading why Bono is my hero. I hope you realize that just because someone is a musician doesn’t mean that they can’t accomplish much more than that. 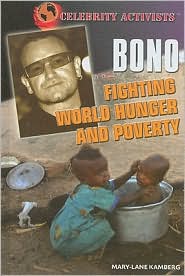