by Alyssa from San Diego

“As a rock star, I have two instincts, I want to have fun, and I want to change the world. I have a chance to do both” (Bono). Bono; friend, family man, rock star, and humanitarian. An all around good man with all around good intentions. Bono grew up in Dublin, Ireland in 1960. During his earlier school days, Bono made many friends and was liked by most teachers. Though the elementary days seemed fun, that later turned around when he reached his teenage years. He started skipping school and no longer cared about grades, receiving the title of a “troubled student.” After transferring schools during high school, and finding the right crowd to hang around, Bono finally found the cement to fill the hole in his life, music. Now that Bono has found his passion, he is the lead man of U2, one of the best bands today. Selling out shows worldwide and wearing the rock star status under his belt, Bono still makes time out of his day to do good. He travels to impoverished countries of Africa and fights AIDS and HIV, with the goal that no child will be born with HIV by 2015. Bono is deserving of the title hero because he is a humanitarian for those who have AIDS in Africa, and uses his amazing musical talent to help raise money for charity.

In his free time, Bono travels to Africa and other impoverished countries to help the many people in need. Bono didn’t know what to expect when he first went to Africa for the first time. He said: ”Africa is a continent in flames. And deep down, if we really accepted that Africans were equal to us, we would all do more to put the fire out. We're standing around with watering cans, when what we really need is the fire brigade.” Bono is disappointed in the actions of the American people. He’s saying that we have the correct ideas; we just don’t take their struggles into consideration enough. Bono is saying that there’s a part of the American nation that is afraid of what would happen if the impoverished countries of Africa became better, healthier, and nicer countries. He is implying that in the future the African countries will overpower America, and that Americans are afraid of the possibilities of the future. The American population should copy his actions and do what is right for these countries in need. Many people were concerned about what Bono’s true intentions were. I had met enough people to quickly figure out who is genuine and who is there for show… I knew as soon as I met Bono that he was genuine. He had his facts in hand and didn't have any agenda other than doing all he could to help people in desperate need. Along with Franklin Graham, Bono, 45, helped me understand the scope of the tragedy in Africa, especially the pain it is bringing to infants and children and their families. Once I understood, I made both men a promise that I would do all I could to help” (Jesse Helms). People instantly realize that all of Bono’s intentions are true. He really wants to help the people in need, and will do all he can to make them healthier. Not only does Bono help the people in need, but he encourages other people to do the same. With more people like Bono, the world could be a much easier place to live in. if a couple people did the same as Bono, others would join and soon enough we would have a country filled with those who have their goals set straight. Many people wait for this tragedy to affect them personally, and when it’s their turn to ask for help, nobody will have the intention to do so. Bono is a humanitarian that truly wants to help people in serious need, and persuades others to do the same.

Bono includes his fans and other people that want to help by having fundraisers. Bono helps launch the ONE Campaign for Africa. In May of 2004 Bono was a guest speaker at the University of Pennsylvania commencement ceremony where he encouraged graduates to get involved with the fight against the AIDS epidemic in Africa. He also received an honorary doctor of laws degree. Also in May 2004 Bono helped launch a new campaign called the ONE Campaign. The goal of the campaign is to get Americans to come together and fight against poverty and AIDS. The original idea of the ONE Campaign was to try to bring Americans together to fight one of the most deadly diseases. The new goal of the campaign is for no child to be born with HIV in 2015. Scientists have researched and found the medicine to make this happen, now all they need is cooperating citizens to raise not only money, but a voice. Bono has dedicated his time into making sure this goal is reached. He uses his musical talent to help with his search for the termination of AIDS, and will stop at nothing. He has the heart, talent, and wants it immensely. In a way, Bono’s desire for wanting to help Africa is similar to sports. To achieve, you have to have skill, heart, and the right tools. Bono has all of these things. “Bono is to record a charity song together with Alicia Keys, in order to raise money for African families with HIV and AIDS.” He is combining his two greatest talents; music and charity. He enjoys and puts his heart into what he does, making him successful. Bono has devoted his life to making songs and raising money for charity, and is now affecting other famous artists to do the same. Bono focuses his life on saving the lives of others by helping launch a campaign, and recording songs to raise money. Helping people is Bono’s sport, and he is one of the top players in the nation.

Bono said:”So what we're talking about here is human rights. The right to live like a human. The right to live, period. And what we're facing in Africa is an unprecedented threat to human dignity and equality,” to capture the attention of the general public. By being a humanitarian for those who have AIDS in Africa, and using his amazing musical talent to help raise money for charity, Bono is deserving of the hero status. Bono helped launch the ONE campaign, with a goal that no child will be born with cancer by 2015. He does this without anybody asking him to, and truly wants to help the impoverished countries of Africa. I think that with more people like Bono, the world would be a much safer and peaceful place to live. He encourages people to copy his actions and is one of the best musicians that strives to help foreign people that are desperate. 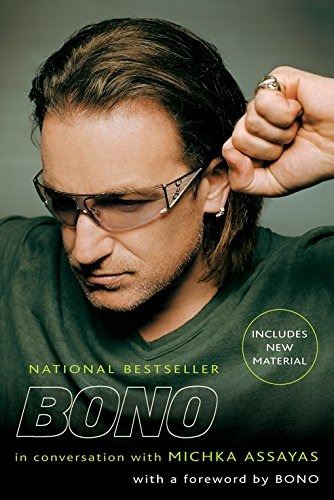