My Hero interviewed J.A. Reynolds, who lost his son, Bruce, a patrolman for the Port Authority of New York, on September 11th. He has created "Bruce's Garden" in remembrance of his son, who was, like himself, an avid gardener. The living memorial garden in Isham Park honors both Bruce and 17 other young men who perished in the attacks, all of whom had grown up playing together in that very park.

Mr. J.A. Reynolds was honored by the Daffodil Project at their annual benefit breakfast which celebrates the efforts of the thousands of volunteers who plant daffodil bulbs each fall and honors organizations and individuals who volunteer their time and efforts throughout the year to improve and protect public parks and open space. He spoke at the Daffodil Breakfast about his work, his son, and his fondness for nature and for the goodness of mankind.

"[Bruce]was symbolic of the strength and
the handsome foliage of the mighty
Oak tree and its leaves when they change
color in the fall of each year.
Whenever one sees an Oak tree
cloaked in fall folliage think:
Bruce" 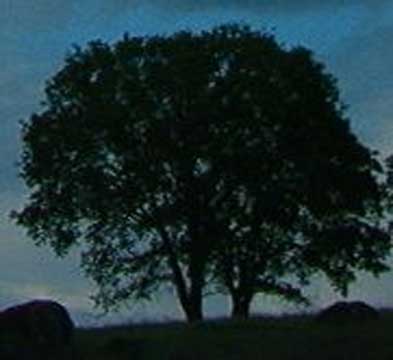 Bruce, who was described as a "gentle soul" despite a strong physical appearance was a beloved father of two young children, a caring husband who loved taking trips to Ireland to visit his McBride family (his wife's kin), a cherised only son, a civil war buff, a man who loved to fish, and an invaluable member of New York's Port Authority, so much so that his colleagues closed the upper level of the George Washington Bridge in both directions for his hearse to pass, standing at attention and saluting. He had worked on that bridge and true hero that he was, had once saved a man's life on it. Bruce was considered an excellent police officer who never neglected someone regardless of their crime. Ever full of empathy and compassion, he was well-known for the unique act of purchasing dinner for his detainees. He was beloved in Ireland as well and was an integral part of the family, and somewhat of a local celebrity because of his charismatic personality. A hero both at home and abroad, he and his partners raced to the WTC that fateful day, and he was last seen helping a woman who had been burned by jet fuel.

"Bruce's Garden" is an exceptionally appropriate manner in which to celebrate this gentle soul who, as a teenager, had once cultivated a garden in a vacant lot near his home in NYC. What had once housed tires and debris became a beautiful place in the neighborhood. As an adult he remained an avid garder, working with his father, J.A., and mother, Geraldine, to coordinate the community garden for more than thirty years, and frequently bringing bushels of fruits and vegetables from his own home garden in New Jersey to share at work. In fact, he had moved to that area of New Jersey so that he could fish in the streams and raise his family in the country, close to nature.

The NYC Parks department sent the Reynolds a shipment of daffodils for planting in their community garden in Isham Park soon after September 11th and somehow finding the courage within himself, he went into that garden that winter and planted the young bulbs. By Spring the garden was blooming and Mr. Reynolds felt that "there was Bruce our beloved son passed through death to everlasting life." Bruce had regularly said that he had "the best parents in the world," and was so grateful for all they had done for him -- thus, a tribute garden organized by his father seemed a natural way to remember thier beloved son.

"There shall be a time of anguish,
such as has never occurred since
nations first came into existence.
But at that time your people shall be delivered,
everyone who is found written in the book.
Many of those who sleep in the dust of the earth shall awake,
some to everlasting life,
and some to shame and everlasting contempt.
Those who are wise shall shine like the brightness of the sky,
and those who lead many to righteousness,
like the stars forever and ever."
Daniel 12:1-3

(taken directly from My Hero's Interview with Mr. J.A. Reynolds:)

Bruce's legacy has done that very thing. He has passed through to everlasting life. Many people in the neighborhood who knew Bruce have that same feeling - that through his death came this legacy. That through the plants and flowers he loved to grow he has awoken into life everlasting.

After September 11th I, like my daughter-in-law, was not willing to accept that he was really gone. I kept thinking he had escaped, that he was lost somewhere. A priest came to my home and sat us down in my living room and told us "You have to look at all this information. You have to decide to let go." Daniel 12:1-3 from the Bible finally convinced me, helped me come to terms with the fact that he was physically gone. It helped me understand that, in my own wording of it, "many of those who lie asleep in the dust of the World Trade Center shall awake, some to everlasting life. Those who are wise shall shine like the brightness of the sky, and those who lead many to righteousness, like the stars forever and ever." Likewise, Bruce would rise up from that dust and would shine brightly.

Isham Park is in upper Manhattan, the last stop before you get to the Bronx. The area is called "Inwood" and is largely Irish-Catholic. [In fact, the Reynold's were one of the very first African-American families to move to the neighborhood.] It began in 1970 and flourished. We started with a program to corral kids that were misbehaving in the neigborhood. It was pretty bad at the park- lots of drinking, especially. We said "Look, why don't we take this part of the park and restore it?" We ran a summer program there. We set up a high school drop out program in that garden and retired neighbors would come out and teach and help the youth with their classes to get their G.E.D.s. Bruce loved working in that garden and never stopped.

Bruce had a very beautiful coloring and compared himself to the autumn leaves. He appreciated himself. He loved himself. True happiness can be found in being self-contained and content. When he was a boy we took him to the woods in autumn to collect leaves, and brought home the rich brown oak leaves which we compared to our own skin tones, to his, his mother's, and my coloring. The community where Bruce lived as an adult with his family in New Jersey has very few African Americans. Yet at Bruce's memorial I was amazed at how many people came out, how many people just loved him in the community, how well accepted he was, and how admired. I grew up before the Civil Rights movement, so to me, seeing a field of people, of white faces, honoring my son was unlike anything else I had ever experienced before, or ever though I would.

He was only 41 and yet he made such a lasting impression on so many people.

He was not at all inhibited or apologetic about being black, about being a person of color. Marian, his wife, is a beautiful Irish woman, blond and rosy. Their marriage was made in heaven. They were a beautiful couple. Beautiful to see. In memory of Bruce I made a bouquet of oak leaves and roses. I gathered the oak leaves from an oak grove next to his command station at the George Washington Bridge. The roses symbolize Marian, and the oak leaves symbolize Bruce; like them, together they are a beautiful combination.

After September 11th, I was convinced I was never going back into that garden again, though. I knew that if I left my house everyone would want to talk with me about Bruce. But a reporter from the New York Times convinced me to at least plant the bulbs there in memory of Bruce. Right now it's probably more beautiful than it has ever been. In addition to the flowers, we have standing topiaries made of the shrubbery, and ivy beds.
A 1/4 acre of Isham Park is now officially called "Bruce's Garden," but most people refer to the entire park as that. We have concerts in Bruce's Garden. We are having two concerts to remember September 11th this year; one band is comprised of indigenous peoples from the Americas and the Pacific, and the other group is an eclectic multi-cultural mix.

Through the years, there always seem to be volunteers and youth programs to help work the garden. I still go out there and tend to it myself, or I get help to assist me with it. Right now I'm planting oak trees in his memory.

Unlike a cemetary where memorials are generally regarded as 'final', here in the park, it's there. It's forever present. At night the nearby memorials are lit up and you can see the photos of the young men and as you drive by you are always reminded that these men were here and are still here with us.

The Daffodil Project is the largest volunteer, citizen-driven planting effort in New York City's history, with over 20,000 participants planting 2.5 million flowers since the Fall of 2001. More than just a way for New Yorkers to exercise their green thumb and beautify their beloved metropolis, the Daffodil Project is a living memorial for those who lost their lives on September 11th, and a regular reminder to the city's residents and to millions of visitors, that like the determined flowers, the city too is revitalizing and growing anew, yet never forgetting the harshness of the winter it conquered.