From this pivotal position, this committed and outspoken leader reaches out to thousands of parishioners in Harlem, and millions more through his radio show. As magnetic and powerful on the evening news as he is on the pulpit, Butts not only offers the comfort of religious faith, but the promise of improved race and community relations to all New Yorkers.

He has courageously stepped forward to address the issues raised by the spread of HIV/AIDS in the black community and has served as the president of Africare, an organization dedicated to improving rural life in Africa. But he is primarily known for his position on community development and economic self-determination – and for his own business sense. He has used that acumen to rejuvenate his under-funded church, and to reinvent a troubled high school, return a once-bankrupt YMCA to Harlem, and to create $300 million dollars worth of development, including low-income housing for seniors and the homeless. Most recently, he has assumed the position of president of the State University of New York at Old Westbury.

Where once there were burnt-out buildings, drug dealers, and massive unemployment, there is now a thriving community, anchored by black-owned businesses and housing for those who need it. Reverend Calvin Butts deserves much of the credit for Harlem's revitalization, and in so doing, he has ministered not only to its body, but to its soul.

Dr. Benjamin Elijah Mays in my hero. Dr. Mays fought on behalf of young, black men who deserve an opportunity to demonstrate that they are as intelligent, as moral, as brave, and as able to achieve as any other men or persons in this world. He believed in the dignity of all beings, and his life reflected that ideal.

Benjamin Mays was born the eighth child of tenant farmers in a small town in Greenwood Country, South Carolina, in 1894. From the very beginning, he had to overcome the poverty and racism that plague his birthplace. Hard work and intellectual curiosity triumphed, and Benjamin Mays excelled in his early scholarly endeavor. He was valedictorian of his high school class, a Phi Beta Kappa graduate of Bates College, and he earned a master's degree at the University of Chicago. Later, he became the president of Morehouse College and one of the greatest educators of the twentieth century.

His chief crusade was to rid the world of prejudice for the betterment of all people. He said, "The chief sin of segregation is the distortion of human personality. It damages the soul of both the segregator and the segregated."

He was a man who could engage and audience, a powerful orator. He comported himself with distinction and set forth ideas that changed minds. His influence has produced hundreds of medical doctors, Ph.D.s. political leaders, clergy persons, and civil servants who have held spread his idea of nobility, morality, and character throughout the United States and many parts of the world.

I admired him so much that I aspired to be like him. Today, as a clergyman in one of the most important churches in America, as president of a college, and as a man committed to improving life in New York, I am hopefully attaining some of what Dr. Mays achieved in his lifetime. No other man, with the exception of my father, has had that kind of impact on me.

I first became aware of Dr. Mays as an adolescent, somewhere between ten and thirteen yeas of age. My mother took me to hear him speak on at least three occasions. I was just a boy, but his speeches made such an impact that I can still remember much of the content. I learned that he was the president of Morehouse College in Atlanta and decided I wanted to go there when it came time to continue my education.

Dr. Mays retired from Morehouse during my freshman year, but he was still very present on the campus as president emeritus. He had earned the school an international reputation for excellence in scholarship, leadership, and service. Students loved to hear him speak. I remember he would often recite a short poem that included this line, "I've got just a minute, but eternity is in it." It was to let you know that when you stood up to speak before an audience, you had to make use of that moment. More importantly, make sure what you say is of value.

This lesson became evident sometime during my freshman year when I was opening an account at a bank in town. The teller who was waiting on me seemed to be taking too long to get the account together. I needed to get back to campus for class, and I became irritated. The longer the teller took, the more impatient I became. I complained and my voice rose. Then from down at the other end of the bank I heard a voice say, "Mr. Butts, that is not appropriate for a Morehouse man!"

I looked up and it was Dr. Mays. He looked at me and said, "Morehouse men do not behave that way."

Well, I straightened up! The experience made me realize a couple of things: First, what kind of behavior was expected of me as a representative of my learning institution. And second, Dr. Mays knew my name! I was shamed by my behavior but still flattered that this powerful, charismatic man knew my name.

Dr. Mays was in this world, but he wasn't of this world. The bank incident happened almost forty years ago, and I remember it as clear as a bell today. When Dr. Mays spoke to you, you remembered what he said.

As I got older, I came to appreciate his bravery and the scope of his work. He was a real revolutionary. He was training black men to be strong, to be leaders, to be intellectually rigorous, and to stand up against an oppressive and racist society. And he was doing that in the 1930s and '40s!

When I have to face challenging situations or I feel a little troubled or insecure, Dr. Mays immediately comes up in my mind. He set the standard for me. I remember his words and his example: "Do not let a situation intimidate you. You've been prepared to meet any challenge."

I think that he changed the face of America because he influenced so many Morehouse graduates. The famous is, of course, Martin Luther Kind, Jr., but Julian Bondy, Lerone Bennett, Otis Moss, and Olatunje Babatunde--one of the great African drummers whose music has inspired millions, not only in Africa but all over the world--are Morehouse graduates. In addition, there are thousands of others who work as civil servants, physicians, scientists, college presidents, and artists all over the country. You may never hear the name s of these men, but they are important people who have been providing strong leadership in their local communities. They are also fathers and husbands and friends to countless others. Dr. Mays's sphere of influence is far-reaching and continues to grow.

Ultimately, the world should commend Dr. Mays for the sense of pride and leadership he instilled in Morehouse men, for dealing with very touch racial situations, and for convincing people in the deep south that education black men was the right thing to do.

When I was a senior at Morehouse, Dr. Mays asked me to do research for his book, Born to Rebel. My name in the acknowledgments was my first writing credential and it was a great honor. Years later, Dr. Mays was an invited speaker at our church, and I had the pleasure of spending time with him again. Dr. Mays never failed to impress me withi his intellectual stamina, his powerful sermons, and his ethical standards. He was an ordained Baptist preacher, a deeply faithful Christian, and a dedicated family man. He was devoted to his students, who, under his leadership, became his family.

Dr. Mays once told a group of students, "I will live in vain if I do not act so that you will be freer than I am--freer intellectually, freer politically, and freer economically." His legacy is proof that he did not live in vain.

MY HERO thanks Rev. Calvin Butts for contributing this essay to My Hero: Extraordinary People on the Heroes Who Inspire Them. 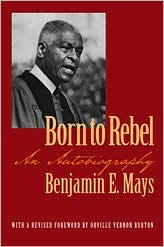 MY HERO Extraordinary people and the heroes who inspire them