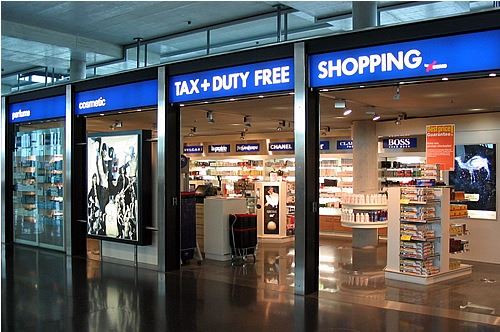 Charles Francis Feeney Duty Free shopCoolcaesar at the English language Wikipedia / CC BY-SA (http://creativecommons.org/licenses/by-sa/3.0/)Imagine yourself in the airport, sitting on a chair, waiting for your departure time. While you are observing the area, you notice a man who is sitting across from you. He has grey strands of hair as thin as a thread, with a face full of creases which reminds you of a tranquil, loving grandfather. He is wearing an indigo-coloured Hawaiian shirt, with crimson red hibiscus flower patterns. He has a simple watch, nothing remarkable about it except for letting you know the time. When a flight attendant announces for the coach passengers to enter the airplane, the elderly man stands up while leaning on his cane for support, to catch his flight. If someone told you that the elderly man who you just saw was a billionaire, would you believe it? A billionaire riding on a public airplane, seated in coach class, not even business class. You might wonder, "How is this possible?" The man is real, and his name is Chuck Feeney. Most people would not recognize his name; however, they would recognize his business, which is the Duty Free Shop. He has founded the shop that you encounter in most airports that sells various items without additional tax. He is considered a billionaire from all the income from his empires of shops; however, he is worth less than $2 million at the present. Chuck Feeney is a hero because of his unconditional love for humanity, he is always eager to improve the lives of many by building educational facilities and medicinal research in various countries; moreover, he is an example of a true philanthropist.

Chuck Feeney was born on April 23, 1931, in Elizabeth, New Jersey, United States. Currently, he lives in Dublin, Brisbane and San Francisco. He was born during the Great Depression, when many people were struggling. He served in the Air Force during the Korean War. After the war, he attended Cornell University of Hotel Administration on the GI Bill. When he graduated in 1956, he went to France to take more courses. During his time in France, he got involved in the business of selling tax free objects to the U.S. Navy Atlantic Fleet sailors, which gave him an idea of duty-free shops. He and other men gathered to make the duty free business into a reality. By 1964, they had succeeded in expanding their duty free shop empire to 200 employees in 27 countries.

Chuck Feeney is a hero in many ways. He is a hero who saved innocent people from getting killed in the Korean War. From the $7.5 billion he has earned from his Duty Free business, he has given away more than 90% of his wealth to various charities, universities and countries. He has given away $19.5 million dollars to a charity called Operation Smile, which corrects cleft palates in children from poor nations. For $250, one can cure one child and change his or her life forever. He has cured at least 38,000 children at the present. In 2002, he donated $117 million to South Africa for AIDS relief. He has donated $170 million to the University of Limerick in Ireland, and $290.5 million to the University of California in San Francisco to enhance their education facilities, staff and wider variety of courses. In 1999, he invested in Vietnam for upgrading their medical research and facilities. In addition, in 2001, he funded $320 million to Australia's Queensland University of Technology for biomedical research. He has also established the Atlantic Foundation, a non-profit organization that donates and helps out people in need. In his own country, he has been an anti-death penalty advocate and has granted $28 million to abolish it. In 2012, he has invested $350 million in Roosevelt Island in New York to develop a NYC tech campus.

Chuck Feeney has been helping out people who are in need and building educational facilities throughout his life. However, there isn't a single location where he has built or developed a facility that hangs his portrait or name on the wall to inform people about him. In fact, Chuck Feeney is not comfortable about letting the public know about his charitable work. Before the magazine Forbes published an article about him in 1997, no one knew who he was, not even the charities or organizations he has donated to. He has always been an anonymous donor until the amount of money was becoming too big to ignore. He has inspired many people, especially billionaires, to help others from the heart, not for public attention. The Bill and Melinda Gates Foundation has been inspired by the Atlantic Foundation, which was founded by Chuck Feeney.

Although he is a billionaire, he does not have a lavish lifestyle. In fact, he does not even own a car. He is pleased with a rubber-banded Cortex watch, and riding coach class in airplanes and trains. He loves walking through the university campuses he has developed, and watching the place filled with energy and hope from students. Chuck Feeney was awarded the Cornell University icon in 2010 for his unchanging support for the university; the Irish American Hall of Fame in 2011 for enhancing the educational system in Ireland, and he is the first person to receive this award; lastly, the UCSF medal in 2012 for his devotion to many universities in San Francisco.

Chuck Feeney is no ordinary hero. He is a hero who is disguised as an ordinary elderly man, who has done marvellous works throughout his life. He has improved millions of lives through better education and medical facilities. He also inspires others to reach out to people who are in need. Not only is he a philanthropist but also a modest person. He is not egocentric, wishing for public attention about his charities, nor selfish, keeping all his fortune to himself. Not only wealthy people but also ordinary people should try to imitate Chuck Feeney's actions. If all people were more like Chuck Feeney, the world would be a better place.

Click here to listen to the Charles Francis Feeney story