by Alivia from Hillsborough 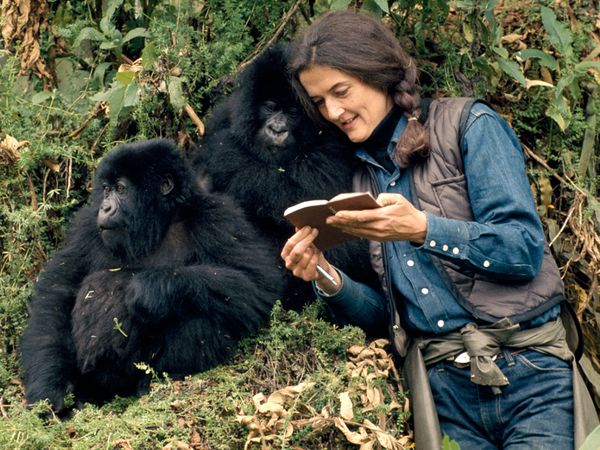 Dian FosseyHpalaucampos [CC SA 4.0] via Wikimedia Commons https://upload.wikimedia.org/wikipedia/commons/0/09/Dian_Fossey_Con_sus_gorilas.jpg"The price of success is hard work, dedication to the job at hand, and the determination that whether we win or lose, we have applied the best of ourselves to the task at hand." -Vince Lombardi

The quote above shows that a hero is a person who can't achieve a goal without putting their whole heart into it. It takes dedication, not just knowledge. Dian Fossey yearned for love as a child, and finding the gorillas brought the love back in her life. She devoted herself to start the process of protecting the mountain gorilla.

The dedicated American zoologist Dian Fossey, much like Jane Goodall, was at the start of accomplishing the protection of primates. She is known for her extensive work with gorillas, her commitment to protecting them, and her book "Gorillas in the Mist," which later became a movie. Dian was a passionate, sweet and beautiful woman. She had a hard childhood. Her father left when she was three years old and her mother remarried shortly after her father's departure. From then on Dian had a weak relationship with her mother and stepfather. Dian lost the love in her childhood but found it from animals. Dian fell in love with the mountain gorilla, and loved the gorillas like she wanted to be loved as a child. Dian's kindness and dedication contributed a lot through her journey. Her kindness allowed her to make friends easily, and she made several friends who were essential to starting her career. One of her most valuable friends was Mary Henry, a secretary at Kosiar, a children's hospital. In 1963 Mary Henry went to visit family in Africa. When she returned and showed pictures of the wildlife, Dian was hooked. She fell in love with the animals and wanted to see in them in their natural habitat. The only problem was getting the money together to travel to Africa. Her parents thought she was crazy for wanting to go, and refused to lend her the money. However, Dian would not be stopped in her quest. Later that year, Dian got a loan of 8,000 dollars from a bank to start her journey to Africa. Dian's dedication made her the kind of person that would not take no for an answer. This helped her through obstacles that might have kept her from achieving what she wanted to achieve. Her passion made her an ideal advocate for gorillas; she was completely loyal to them and was willing to take great risks to protect them.

Because she did not have a good relationship with her parents, she traveled frequently, searching the world to find a "home" that she could call her own. Dian lived in many places through her journey. She lived in San Francisco as a child, then moved to Kentucky where she worked for Kosiar, and lastly lived the life she had strived to live in Africa. Getting to Africa required overcoming a couple of important obstacles: finding the money to travel there, facing the disapproval of her parents, and challenging the idea held by many people at the time that Africa was a dangerous and unpredictable place where no woman should go alone. Without her passion for her subject and her dedication to her work, she would not have had the courage to push past these obstacles to keep going. Once she got to Africa, Dian observed many people in Rwanda were afraid of the gorilla. This fear not only affected the people of Rwanda but it also affected the life of the animals as well. Dian strived to prove the fear of the Rwandans wrong. She was so dedicated to the love and protection of gorillas that it cost her her life at the hands of gorilla poachers.

If Dian Fossey hadn't achieved the start of the protection and study of the mountain gorilla, they would be likely be extinct. Without her work, many people, including the people of Rwanda, would be afraid of gorillas. Dian's dedication and hard work helped people everywhere think differently about gorillas. Dian found what most scientists couldn't dream of finding. Her work with the gorillas has forever changed the ways animals are studied in the wild. Her observations of gorillas' behavior proved the myths about mountain gorillas' violence wrong. During the time period in which she worked, the 1970s, people were starting to think more about animal rights and how people should treat animals. Dian Fosse proved that animals had a lot in common with people and were gentle and intelligent. She sat unharmed within a few feet of them almost everyday for 22 years. She also noticed many behavior patterns within each family of gorillas she observed. Dian became very involved with one particular gorilla, Digit, who was later killed by poachers. Dian had a history of achieving things for others in her society. In Kentucky she worked at Kosiar children's hospital, dedicated to helping sick children. Her dedication and love for her work earned her the title "gorilla girl."

Many people are inspired by Dian Fossey because of her dedication and her work with the gorillas. Dian Doran, one of the women who followed in Fossey's foot steps, took Fossey's job with the gorillas knowing of Dian's symbolic but horrible death. Doran knew that Fossey's goal needed to be fulfilled. Many people agreed with Doran, so Fossey's legacy lives on in many organizations and programs devoted to saving the mountain gorilla. Because of her work, the world's awareness of the endangered mountain gorilla has increased. The gorillas are now protected by the government of Rwanda and other international conservation organizations like the Dian Fossey Gorilla Fund. Dian stood up for what she believed and died trying to save what she loved most. She was an extremist in her love for nature. She will be forever remembered and appreciated. Like the famous words of Vince Lombardi, Dian used dedication, determination and love, knowing that she may not win, but put all of her effort into achieving her goal. Dian did win. She won the love she didn't get as a child and started the worldwide protection of the mountain gorilla.