by Christine from San Diego

"The wise man does not grow old, but ripens." (Victor Hugo) Tenzin Gyatso the Fourteenth Dalai Lama, who has labored extensively for peace and democracy for the past sixty-three years, is now seventy-seven years old. Born on July 6, 1935 to a small peasant family, Tibet recognized him as the reincarnation of the Thirteenth Dalai Lama at age 3. He has experienced much in his life- civil war, family death, and brutal oppression. In 1949, due to the Chinese invasion on Tibet, he ascended the position at age 15. After his exile from Tibet, the Dalai Lama established government in India. Since then, he has earned the Nobel Peace Prize, the Human Rights Award, and many more. A hero must possess the morality to stay strong in the face of temptation presented by fame and influence, the dedication to strive for his goal no matter the obstacle, and the tolerance to accept all the people he meets along his journey to change the world. As one of the most revered spiritual leaders, the Fourteenth Dalai Lama is an icon of virtue, advocating for democracy and freedom for his country, and toiling tirelessly to bring peace to the world.

The Dalai Lama embodies morality; he is a role model for those who wish to have a positive difference on the world. In 1989, The Nobel Foundation awarded him the Nobel Peace Prize for his opposition against violence. In his speech, he proclaims, "I feel honored, humbled, and deeply moved that you should give this important prize to a simple monk from Tibet. I am no one special." (Lama). Although he is world renown as a wise spiritual leader, the Dalai Lama regards himself as a simple Buddhist monk. The fame accompanied with such an important position has not corrupted him; he retained his values and often times urged his followers to follow his example. In addition, the Nobel Peace Prize, a distinguished award, is bestowed upon the people who have influenced society in an admirable way; people such as Martin Luther King Jr. and Mother Theresa are among winners. The fact that the Nobel Foundation gave this prestigious award to the Dalai Lama proves that not only is he an exemplary peacemaker, but also a commendable role model. In the book, The Open Road: The Global Journey of the Fourteenth Dalai Lama, the Dalai Lama speaks to his friend's son, Pico Iyer. "'With this incarnation," he said (referring, as he often does, to the role of the Dalai lama as if it were just a robe he happened to be wearing), 'there are some translations, especially of the Chinese, that say, 'Living Buddha' That's totally wrong!... The Chinese word means 'Living Buddha.' In Tibetan the word 'lama' is a direct translation of 'guru.' That is, someone who is respected because of his wisdom, or because of the indebtedness one owes to him. So the rough translation is 'someone worthy of respect.' No implication of 'Living Buddha!'" (Iyer 51). The Dalai Lama, with all his fame and influence, does not wish people to see him as a "god", but rather as a simple guru. His view of this coveted position, which commands great influence, is humbling. The title is not important to him; it is as inconsequential as "a robe he happened to be wearing"(Iyer 51). ""There is no one in our society today,' [the dean of the University of British Columbia] intones, "who represents love, compassion, and altruism as much as the Fourteenth Dalai Lama.'" (Iyer 66). The world is full of tragedy- famine, political unrest, disease- to name a few. In spite of seeing all the anguish the world has to offer, the Dalai Lama has become neither cynical nor jaded. He continues to be a pillar of integrity venerated by many people.

After all the years of hardships, the Dalai Lama is still dedicated to peacefully achieving democracy and freedom for Tibet. In his Nobel Peace Prize Acceptance Speech, he states: "The suffering of our people during the past forty years of occupation is well documented. Ours has been a long struggle. We know our cause is just. Because violence can only breed more violence and suffering, our struggle must remain non-violent and free of hatred. We are trying to end the suffering of our people, not to inflict suffering upon others." (Lama). Steadfast in his position against violence, the Dalai Lama has not wavered. His loyalty to his beliefs inspires people that they should stand their ground when others challenge their values. Besides his loyalty to his beliefs, he is incredibly loyal to his people. For the past forty years, he has continued to lobby for the democracy of Tibet. In a 2011 article by Phayul, a Tibetan newspaper, the Dalai Lama responds to the Tibetans' fear of his abandonment of his cause. "His Holiness the Dalai Lama has reassured Tibetans that he would not abandon the responsibility of leading the Tibetan people. 'Democracy is very important part of our political development. It is not that I am discouraged or shirking away from the responsibility. I will never abandon you Tibetans until my last breath.'" (Phayul). Currently seventy-seven years old, the Dalai Lama grows older, and with his age, the probability of his death grows higher. However, he refuses to let the fear of death stop him from achieving his goal. No matter the obstacle, he is determined to overcome it in order to achieve the dream of his people- democracy and liberty of Tibet.

By teaching tolerance, the Dalai Lama labors assiduously to bring peace to not only his country, but to the world. He advocates for harmony in all aspects of life. "With the ever growing impact of science on our lives, religion and spirituality have a greater role to play reminding us of our humanity. There is no contradiction between the two. Each gives us valuable insights into the other. Both science and the teachings of the Buddha tell us of the fundamental unity of all things. This understanding is crucial if we are to take positive and decisive action on the pressing global concern with the environment." (Lama). Science and religion have warred for hundreds of years; these two greatly conflicting ideas could not be more different. However, the Dalai Lama, the quintessence of tolerance, teaches that the coexistence of these concepts is vital, as both are important to the well being of the modern world. In one of the many conversations with Pico Iyer, the Dalai Lama states: "I treat every human being, whether high officials or beggars-no differences, no distinctions.I am a Buddhist monk, I am a follower of Buddha. From that viewpoint. one simple, innocent, sincere spiritual speaker [is] more important than a politician or a prime minister. meeting with public, ordinary people. there's some contribution for peace of mind, for deeper awareness about the value of human life. When I see some result, then I really feel, 'Today I did some small contribution.'" The Dalai Lama accomplishes his goal through patience and small acts. He shows that every small contribution is important, whether it be to the person who contributed or to the person who received the contribution. With each act, he has touched another life, providing hope and peace. Open minded to all, he does not care whether the life he has touched is one of great affluence, or of great poverty. He promotes unity between all people and ideas. It does not matter if they greatly conflict with each other; the Dalai Lama believes that the middle path is attainable.

"Death never takes the wise man by surprise; he is always ready to go." (Jean De la Fontaine) The Dalai Lama has labored long in his journey to achieve freedom and democracy for Tibet. He continues to do so to this day, and swears not to cease until his dying breath. He, whom the world looks upon as a tower of strength and honor, has endeavored to make democracy and liberty a possibility for his country, and along the way, has also attempted to bring harmony to the world. The dedication and loyalty he shows to his values, his people, and his cause is what makes him a hero in my eyes. His tolerance of all people and ideas, no matter how much they clash, is something I would like to emulate. He possesses the will to keep going in the face of devastation; performing the awe-inspiring feat of embarking on a wearying journey around the world to raise awareness for his cause. He has touched the lives of many people, providing knowledge for those who seek spiritual enlightenment, peace for those who are lost, and inspiration for those who wish to better themselves. He is the proof to the world that not everyone is out for his or her own agenda. He is a hero. 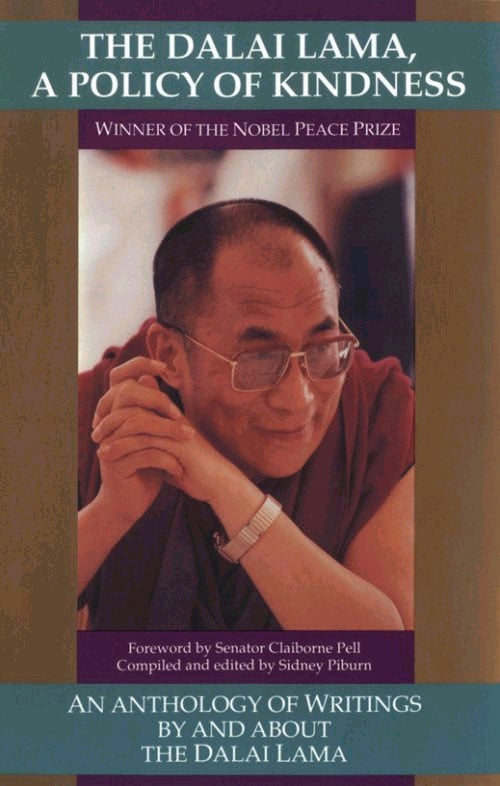 The Dalai Lama a Policy of Kindness: An Anthology of Writings by and About the Dalai Lama/Winner of the Nobel Peace Prize
Sidney Piburn (Editor), Claiborne Pell 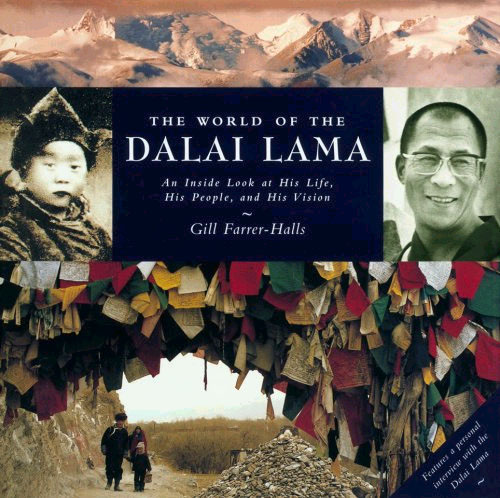 The World of the Dalai Lama: An Inside Look at His Life, His People, and His Vision
Gill Farrer-Halls