by Kristin from Vermont

"The papers say that no composer ever celebrated such a triumph. Carnegie Hall was crowded with the best people from New York, and the audience applauded so that, like visiting royalty, I had to take my bows repeatedly from the box in which I sat."

These words recall Antonin Dvořák's experience listening to "From the New World," (Symphony #9). Having allowed a good friend, Anton Seidl, to conduct this latest piece at Carnegie Hall, the composer Dvořák sat among the admiring audience.

Antonin Dvořák was born on September 8, 1841 in Nelahozeves, Czechoslovakia. His father owned an inn where folk music was a part of everyday life. Antonin spent many of his younger days there, listening and absorbing the notes, rhythms and melodies. He soon started playing the violin, which he picked up rather quickly. By the age of twelve he was accompanying musicians on his new instrument. Dvořák had a natural passion for music. Little did he know the greatness he would achieve from indulging this passion.

By the time Dvořák turned eleven he had already dropped out of school to help support his family by becoming a butcher. Although this work kept him busy, he still found time to learn the organ, viola, piano and basic music composition. Dvořák's parents recognized their son's talent and were very supportive. In 1857, when the boy turned sixteen, his parents decided to send him to the Prague Organ School to study with a man named Antonin Liehmann. Dvořák graduated two years later and decided to stay on in Prague for awhile to teach students as well as play at inns and theatres.

He was soon awarded the privilege of becoming Principal Violist in the Provisional Theatre Orchestra, but in 1871 he sacrificed his new position in order to compose.

In 1884, the artist visited London for the first time, and in 1890 he moved to Russia in order to take a position at the Prague Conservatory as a professor of music composition. In 1892 he visited New York and was appointed the director of the National Conservatory of Music and received $15,000 per year.

By 1893, Dvořák had composed eight of his nine symphonies, six operas, a small bit of chamber music, three concertos, two overtures, most of his choral music and his Slavonic Dances and Rhapsodies.

Although few of his works were influenced by the American cultures (such as his Symphony #9, "From the New World"), Antonin Dvořák loved his homeland best. During his three year stay in the United States, he spent his summers in a Czech community in Iowa, speaking in his native language and enjoying the companionship of compatriots.

In 1859, Dvořák returned to Prague and became the director of the Prague Conservatory of Music in 1901. Also in 1901, the most successful of his ten operas, "Rusalka" premiered at the Prague National Theatre.

Dvořák's sixtieth birthday was celebrated nationally. He died three years later on May 1, 1904 of a severe stroke.

Antonin Dvořák always described himself as "a simple Czech musician," but to me he is a hero. There is a reason why his music is still played to this day, almost a century after Dvořák left us. His music has been a powerful force in others' lives. For example, one day in 1907 when George Gershwin was only eight years old, he was walking down the street near his house in New York when he heard a tune coming from a nearby slot machine (an old-fashioned type of juke box). He was so moved by the music, which was one of Dvořák's works, that he later stated that "coming into contact with this music was the most important of all his early musical experiences." Dvořák did many things which I long to do myself. He traveled to various countries, he played many instruments, he had great experiences playing with orchestras and other musical groups, he composed music and, most importantly, he genuinely enjoyed his work. I can only hope that I will one day be able to enjoy similar experiences.

Dvorak and His World
Michael Beckerman 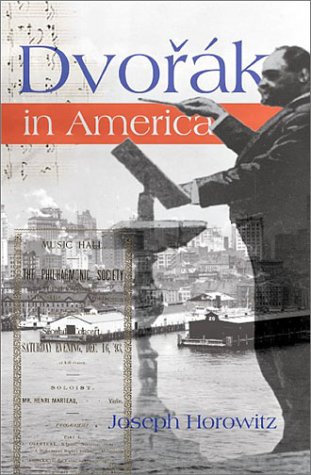 Dvorak in America: In Search of the World
Joseph Horowitz