by Maeve from Peterborough

Emily Murphy was born into the Ferguson family in Cookstown, Ontario, in the year 1863. Emily was the third child in a family of six children. The family was made up of strong political figures; talks of politics within the family were not rare. Emily grew up with a father, uncle, brothers, and a grandfather who were all highly involved in politics. She grew up with considerable knowledge and curiosity about the subject.

When Emily was 35 years of age, she and her husband moved to Alberta where she soon became actively involved in women’s rights campaigns. Emily Murphy convinced the Alberta government to pass the Dower Act in 1911. The Dower Act allowed a wife's right to a one-third share of her husband's property if he passed away. Emily’s many other accomplishments included working alongside her close friend, Nellie McClung, to obtain the vote for women in the Equal Franchise League and to found the Federated Women’s Institute. Emily believed in a country where women and men could work alongside one another, and women were considered “people.” In 1929, the Privy Council of Britain declared that women were legal “persons” under the British North America Act, thanks to Emily's hard work and dedication.

I chose Emily Murphy as my hero because I admire her work to help Canadian women with their rights. I think the work she did in Alberta is amazing, and without women like Emily, we would not be where we are today in society. As a girl, I could not imagine life with no rights, no inheritance, and no vote. Thanks to Emily Murphy, and many other women activists, I will never have to experience that kind of situation. I think that equality between the sexes is an important factor in our world today, and Emily inspires me as an individual to give this more thought and to try and do something about it. I think she also inspires a great number of women and men; to me this is my picture of a hero. Managing to acquire the titles of author, women’s rights activist, and the first woman magistrate in the British Empire is an amazing feat, and I admire Emily Murphy for all her hard work and dedication to help women and children alike. Lastly, Emily is my hero because she has affected me personally; I am a girl and soon-to-be-woman, and I now have my rights and a vote, thanks to Mrs. Murphy!

Heroines.ca - This site shows all the sculptures made by artist Barbara Paterson; this sculpture is of Emily Murphy
The MY HERO Project - Read a story about Emily Murphy's friend, Nellie McClung. 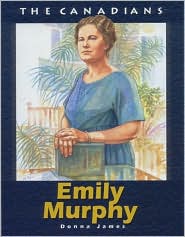 Nellie McClung: The Complete Autobiography: A Clearing in the West and The Stream Runs Fast

Nellie McClung: Voice for the Voiceless