by Harper from Eden Prairie

Erich Remarque was a great person. He was a person that fought in World War One and inspired the world. He wrote the anti-war novel All Quiet on the Western Front. He also wrote many other novels. Although he was only a soldier in the war, he still made an impact.

Erich Remarque was born on June 22, 1898 in Osnabruck, Germany. He was the only son out of three kids. He was poor as a kid. He moved 11 or more times when he was a kid. He had always wanted to be an author. He had other things in mind than war. When he was around sixteen years old, he started writing poems, essays, and the start of a book. The book was called Die Traumbude (The Dream Room). Remarque went to the University of Munster, wanting to be a teacher.

In 1924, he started using Remarque instead of his original name Remark, which his grandfather had changed the family name to. He did many jobs after the war. Some were librarian, businessman, journalist, and others. He married an actress named Jutta Zambona. They didn’t have a very good marriage, and they divorced only to be remarried in 1938. He wrote Im Westen nichts Neues (All Quiet on the Western Front) in 1927, but it was not published until 1929. He made a few more books about war. His life after World War One was the time that he made a mark in history. In 1933 the Nazis claimed that his original last name, Remark, was spelled backwards and was actually Kramer (they said that was a Jewish name). They burned his books and banned them. The Nazis said that he had never fought in World War One.

Erich Remarque’s most famous novel was All Quiet on The Western Front. It is about a fictional character named Paul Baumer that joins the army in World War One. It tells about the battles and what trench warfare was like. It is one of the first books about war that’s objective is not to tell about a heroic character, but to say how war isn’t heroic at all. The character, Paul Baumer, has experiences that are similar to Erich Remarque’s own experiences in battle. In the end, Paul Baumer died. All Quiet on The Western Front was one of the things that helped Erich Remarque make and impact on the world. It is one out of a few anti-war novels that he wrote.

Erich Remarque was an amazing person that made a big impact on the world. He didn’t write All Quiet on The Western Front to become famous, he wrote it to help stop war. It inspired many people, and was very good. He fought in World War One and told people how it feels, not how heroic he or anyone else was. Erich Remarque was an inspiring person that will be remembered for a long time. I picked Erich Remarque as a hero because he has the famous book, All Quiet on The Western Front. It is an anti-war novel, and I strongly believe that that is a good, thoughtful thing to do, and that an anti-war novel that famous makes a big impact on the world and makes the world one step closer to being free of war. 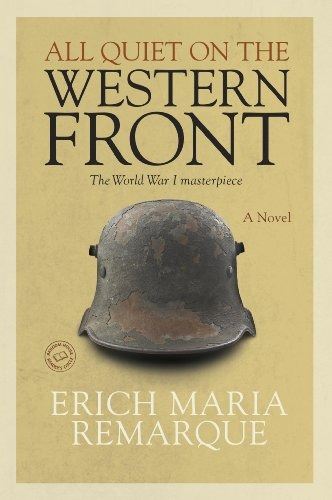 All Quiet on the Western Front
Erich Maria Remarque