by Miracl from San Diego

"Nothing beats hard work... I got the medals to prove it." - Griffith-Joyner

Florence Griffith-Joyner once said, "Hard work determines how far you get in life." Hard work definitely led to success for Griffith-Joyner. In 1967, Florence "Flo Jo" Griffith-Joyner began exemplifying her "Need for Speed." At age 7, Griffith-Joyner aspired to catch one of the fastest land animals: A jack rabbit. Although this was impossible she still tried and constantly remembered her mother saying "Nothing is going to be handed to you. You have to make things happen." (Griffith-Joyner's mother). Florence learned this while living with her mother and siblings in a lower-income community of Los Angeles. Florence Griffith-Joyner showed breath-taking effort in being the best person and athlete she could be. However, there were people saying she would fail, because she was a female and African-American but Griffith-Joyner didn't give up hope and surprised a nation of unbelievers. Griffith-Joyner’s morally strong personality and hard work made her successful on the track and a hero in life. 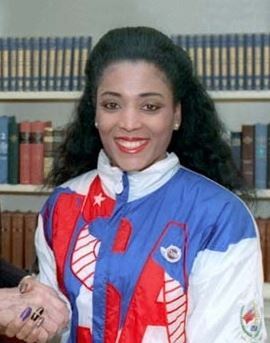 Florence Griffith-Joyner was morally strong because she used her childhood circumstances as a foundation to build her future. Florence Griffith-Joyner showed moral fortitude when she continuously focused on her goals. Throughout her career, she never gave up on her herself, her fans or her family. Florence Griffith-Joyner reflected on her performance in the Olympics, in Seoul, South Korea: "I had a good start, a relaxed middle, and kept my knees up at the end. It was more or less a perfect race. When I saw that time, I couldn't believe it, but after the first race time I knew I could get into the 10.50's. It just made me realize that if I kept concentrating, I could go faster" (Griffith-Joyner). Griffith-Joyner’s objective was to win the Gold and remain relaxed through the race. She achieved this goal and pleased her mother, her fans, and herself.

Being morally strong also means being confident. Griffith-Joyner showed confidence as she “relaxed” and ran the “perfect” race. Despite becoming famous, Griffith-Joyner remained humble yet self-confident. After participating in the 1988 Olympics, other track athletes accused Griffith-Joyner of using performance-enhancement drugs. In this matter Griffith-Joyner held her head high, denied the accusations and continued to race. Christie Succop wrote, "Joyner said, all allegations toward her were false and that track is all about chasing records and giving young kids something to chase, too"(Succop). Even in the spotlight Griffith-Joyner found some way not to focus on herself, but to turn her attention on the well-being of others. She embodied a selfless, humble, and a self-confident person. She set the standard for all people who want to be successful in life. Florence Griffith-Joyner was morally strong because she displayed traits of excellent character, such as integrity, selflessness, and humility.

Wikipedia - For more about the life and times of "Flo-Jo".
Olympic website - Stats for Florence Griffith-Joyner