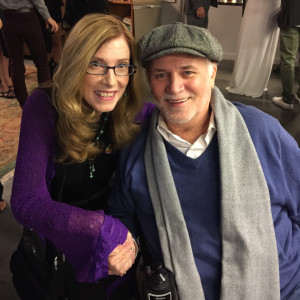 It was an honor to meet a true American Hero, Ron Kovic (“Born on the Fourth of July”), last night at 10th Annual MY HERO International Film Festival at the Herb Alpert Educational Village in Santa Monica, California. Ron expressed great gratitude for his life, which included being on stage to share two Oscars with Oliver Stone and Tom Cruise for the award-winning film based on his book.

For the past 40 years, Ron has been an author, artist and advocate for peace. After presenting his Ron Kovic Peace Prize award at this My Hero event, he gave a motivational speech calling for peace when the Ferguson verdict is announced that had the room standing still.

Nine powerful films competed for the 2014 Ron Kovic Peace Prize Award that goes to “the filmmaker who best addresses the issues of peace in a short film.” The winner receives a $1,000 cash prize that is given each year by the MY HERO Project and donated by U.S. Marine-turned-peace-activist Ron Kovic. This year’s finalists include 9 films: 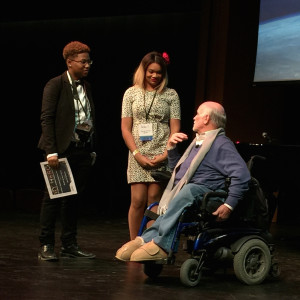 After announcing the winner, Ron gave the most moving speech about peace and hope. Below are some of our favorite quotes from Ron at this event.

Never underestimate the power of 1 person.

We have no idea how strong we are inside, especially when it comes to facing crisis in our lives.

We are much stronger than we think we are, and there’s a beautiful person within each one of us waiting to come out during those difficult days and times.

I could not leave this stage tonight without telling you how grateful I am to be alive.

I am hoping and praying for peace & nonviolence when the decision comes down from Ferguson in Ferguson & all across our county.

I am not only asking the demonstrators to be aware of the importance of being peaceful, but on this night, I’m reaching out to the Policemen in Ferguson, those from the National Guard. I want to remind them of the importance that they practice conflict resolution, that they remember that they must be peaceful & nonviolent, not pointing rifles at peaceful demonstrators or provoking them in any way. It works both ways. It works on both sides. So I’m hoping & praying & hope you’re with me tonight!

We all live in this country together. We’ve all got to learn to practice peace and nonviolence, and the most important word that I want to leave you with is love. It is so important to realize. Love is so important. These are our brothers and sisters. We are all together. … So I leave you with this prayer. May the days ahead be peaceful ones and we move in a positive, beautiful and peaceful direction. 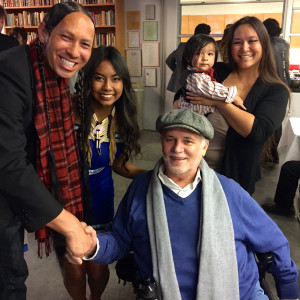 Wow and wow! We felt so fortunate to meet Ron backstage, and shared how the Goody Awards empowers people to honor heroes with a Hero Goody Award thru Twitter and via Hero Goody Award tag necklace. We were also grateful to be there to support Producers Karen Donald and Brian O’Connell from Bali who were honored for their award-winning film “Chasing the Dream” about Oney Anwar’srelentless pursuit to become Indonesia’s most respected surfer.

Thank you Ron Kovic for all that you do to preserve peace every day, and Big Thanks to the My Hero Project and filmmakers changing the world thru inspirational films! You are our heroes!

GoodyAwards.com - Read the article directly from the Goody Awards website