by Amy from Ventura

During the 20th century, people expressed themselves through art and many creative people of the arts were considered heroes. They brought creativity and perfection to their art and helped make a lasting contribution to our culture. They also inspired people who want to pursue the arts.

My hero, Margot Fonteyn, was born in 1919. She was born Margaret Hookham in Reigate, England. She was one of the world’s greatest ballet dancers. She became famous for her performances in Sleeping Beauty, Swan Lake and Giselle. In the 1960’s she was teamed with the Russian ballet dancer, Rudolf Nureyev, at the Royal Ballet in England.

She first studied ballet in China. In 1934 she joined Sadler’s Wells Ballet, which is now the Royal Ballet and by 1940 she was their principle dancer. In 1956 Margot received the honorary title of Dame Commander of the British Empire.

What impresses me most about Margot Fonteyn is her incredible and breathtaking dancing. Her art brought pleasure to the many people who saw her dance. She made them see what ballet could be and raised it to a higher level. Her dancing brought more beauty to the world and gave all the younger dancers someone to look up to.

Margot worked harder than most. She overcame bad feet that would have stopped most people, but she could light up the stage like no other dancer could. She kept working throughout her life to perfect her art. Sadly, Margot Fonteyn died in 1991, but her legacy lives on.

I used the World Book Encyclopedia to get information on my hero, Margot Fonteyn. 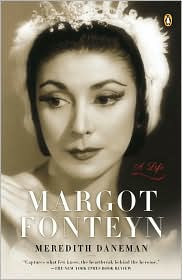