by Julia from Loveland

Imagine what life would be like if you could not see or hear. It would be as though you were living in a nightmare; but unlike nightmares this would not end until the gates of Heaven open wide to your arrival. Helen Keller experienced this tragic way of life, but because of her bravery, determination, and endurance she became a intelligent women and a fantastic writer, but most of all she became my hero. Helen succeeded in being my hero because of her desire to go on in life and to listen even though she could not hear, or to see the beauty in life even though she could not see. Helen was so incredibly brave because of the event that took place in her life the day she became ill. So Helen was not born with her disability, but it came with sickness.So to Helen's parents it was just a terrible coincidence, but God had a plan and his plan for Helen would be introduced later in life. Helen's parents decided to call in Annie Sullivan, who had just so happens to be blind too. Now Annie would be able to help Helen learn the alphabet, what words were, and that they took an important role in the world. Helen had to show bravery and trust in her teacher. After she learned all the lessons Annie could teach her, she had to go to school and learn even more. Helen then met a famous preacher in Boston who told her about Jesus Christ. Going to a school with other children would of frightened Helen, but the Lord gave her the strength that she needed to succeed. Through all of these events that took place in her life she showed bravery. 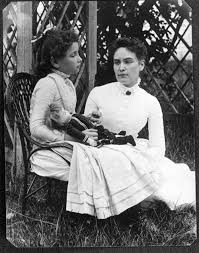 Helen also showed determination. She showed determination when Annie pushed her to learn the meaning of words. She never gave up even when times were tough. Helen also became determined to go to college. So she worked hard and received a Bachelor of Arts degree and became the first deaf person to do so. Then after she graduated she became a writer and wrote a book called "The Story of My Life". Her book inspires people and her movie called "The Miracle Worker" made a huge impact on my life. All of her character traits brave, determined, loyal, and courageous. Determination became the trait to follow and that trait I follow to this day. There were many more ways Helen should determination in her life, but these situations were the ones that stood out to me the most. When endurance entered Helen's vocabulary, she did her best to show it. To think of the terrible event that happened in Helen's life makes my heart drop down to my stomach, but it makes my heart overflow with joy when I think of what an amazing life she had. Helen also made the best of her disability and showed people that anything is possible. Helen had endurance because she did not let her disability get in the way of life. Also when Helen wrote her book she shared her story with the world and making a book while having the disability of being deaf and blind took a lot of time and patience, but mostly endurance. Even though Helen could not see or hear she still found love in flowers, so she built a giant garden and put all of her favorite flowers in it and to me that is an act of endurance. I say this because she did not give up on life, she pursued it and in the end she became the most beautiful flower of all!We can't imagine the devastation of being deaf and blind. Although, we will all face challenges and trials that will bring us to our knees. Our character and story will be written by how we respond and persevere to these challenges. Helen Keller embodied bravery, endurance, and determination no matter how much she felt like giving up. Imagine what our world would become if we would all rise up and live to our fullest potential using our gifts given by God along with his strength. How will you respond?