by Arnaud from Villeurbanne, France

As usual, the diminutive African smiles, hops and nods to the audience before a race. As usual, at the finish line, he's victorious and happy. This is the eternal repetition for the "Giant Ethiopian" on running tracks. What a glorious list of victories! His name appears in every athletic book. In fact, no one can talk about the 10,000 m (an athletic event) without thinking of Haile Gebrselassie: he symbolizes it! It's not an exaggeration to say that it's his "private property."

He was born in the high plateau of Ethiopia, a perfect place for a future runner. As a child, he covered 8 km to go to school - 8 km to go back home - every day. At home, he had to work with his father who was a poor farmer. At the age of 20, in 1993 in Stuttgart, the legend was born: he won a gold medal for the 10,000 and a silver medal for the 5,000. That's how he began an unbelievable career.

Four-time world champion, double Olympic champion, he broke 15 world records. He became an insurmountable obstacle, especially for the Kenyans, also great runners. Armed with a legendary sprint in the last 200 m, he was able to run the last 200 m in 26 seconds!!! His competitors rapidly lost hope of winning and gave up the chase for first place to only focus on "money", until the day he was beaten by Charles Kunathy during the Edmonton World Championship in 2001. In 2003, he passed the torch on to Kenenissa Bekele, a compatriot and fabulous runner, too, during the Paris world championship.

In my opinion, he's one of the greatest athletes of all time. Furthermore, he has a very good personality. Haunted by poverty in Ethiopia, he naturally invested his own fortune to fight it. Despite all his efforts, poverty still exists in Ethiopia.

For me, Haile Gebrselassie evokes hope, effort and humility. He fought fate to become a famous man: he's my hero. 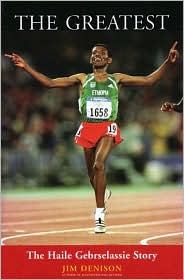