Beloved Peacemaker and Poet of Somalia

"This respected poet is to the Somalis what Shakespeare was to the English...his poems and literary works reflect on all aspects of life such as social ills, politics, love, peace and the agony of the Somali people."
- Ahmed Hussein Kahin

Mohamed Ibrahim Warsame, better known as Hadraawi, is Somalia's most beloved poet. He was born in Togdheer in Northern Somalia (1943). When of school age, he left his sister and eight brothers to go live with his uncle in the Yemeni port city of Aden. While at school, he became known for his wonderful storytelling about lions, jackals and hyenas.

When Somalia was declared independent from Italy in 1959, Hadraawi moved from Aden to Mogadishu. In the early 1970s, he graduated in literature and education from Somali University in Mogadishu. Also during this time, he became well-known for his poetry and plays. His storytelling at Radio Mogadiscio was legendary. Radio stations were numerous in those days, making available a platform for people's opinions and criticisms: "The freshly independent Somalis loved politics, every nomad had a radio to listen to political speeches, and remarkable for a Muslim country, women were also active participants, with only mild mumblings from the more conservative sectors of society."

Hadraawi was no exception in speaking his mind. Known as an influential commentator on the political situation in Somalia, he became highly critical of the military regime of Siad Barre, who had taken power in 1969. Unfortunately, because of one of Hadraawi's plays, Tawaawac (Lament) and his poem, Siinley, Hadraawi was imprisoned at the infamous Qansax Dheere from 1973 to 1978.

After his release in 1978, he became the director of the arts section of the Academy of Science, Arts and Literature for Somalia. In 1982, he joined the Somali National Movement that was based in London. In 1981, for refusing to praise the government, Hadraawi had to flee Somalia for Ethiopia. There, he joined other emigre members of his Isaaq Somali clan to work for independence from the military regime of Barre. When Barre was finally overthrown, in 1991, violent regional factionalism broke out and became the new threat to Somalia. Disappointed, Hadraawi moved to London.

During the years 1991 to 1999, Hadraawi traveled throughout Europe, taking part in many poetry and folklore festivals. When a relative peace had returned to his homeland in Somaliland, he returned and settled in the now recovering and thriving city of Hargeisa.

Although the cruel military dictatorship of Barre was overthrown, Somalia has faced equally challenging problems of clan rivalry and Islamic militancy. Throughout the years, Hadraawi has been a powerful voice commenting on the future direction of Somalia and he remains so today. He feels that those who care about a peaceful and prosperous future for Somalia should not simply stand by without trying to make a difference.

With this in mind, in July 2003, Hadraawi gathered other like-minded citizens and began a Peace March to Mogadishu. Their first stop was the city of Mogadishu. Hadraawi had not visited the city for twenty-one years and was greatly saddened at how the beautiful city had been reduced to rubble in that time. They received a warm welcome from even the most lawless areas of the city. People from many walks of life joined the march and it was a great testament to their courage that they refused any armed escort as they moved from one sectarian area to another. After being deprived of peace for so many years, the residents of Mogadishu displayed a genuine desire for its return to their suffering city and nation.

Hadraawi's group of artists and students (including Somali Youth for Peace and Democracy, SYPD, then traveled 500km/310+mi from Mogadishu and reached the southern port town of Kismaio in less than a week.

"Hadrawi continued to preach peace, stability and non-violence in the Somali Peninsula during his current "Long journey to Peace" overseas. In his interviews he challenges faction leaders/warlords gathering in Nairobi to create a political system that builds public trust and institutions, including independent judiciary, freedom of speech and association, among other human rights, and to end their narrow political ping-pong, and bickering once and for all. Hadrawi's courage, dedication and patriotism should remain our source of inspiration." M.M. Afrah

Although peace for Somalia has remained elusive, with more people like Hadraawi sounding the call, perhaps peace and prosperity will again settle over the culturally rich and diverse nation of Somalia. In the words of the poet himself, he advised his followers not to despair as the "solution to the problems of Somalia will be found one day."

"...the poets that gain the widest renown tend to be those who seek to build bridges and promote peace. One of those is the poet Hadraawi, arguably the most famous living Somali poet, who has travelled across Somalia and the Diaspora to promote peaceful resolutions to Somalia's problems through his poetry. Many poetry recitals by both men and women are now recorded on video and popular ones quickly circulate throughout the global community."
Somali Oral Verse in Exile by Rahma Bavelaar

Not only has Hadraawi written dozens of plays and numerous poems, but many of his poems have been set to music by some of the most popular singers of Somalia; including, Hassan Adan Samatar, Mahamed Mooge and Halima Khaliif Magool.

Hadraawi's Long Road to Peace - "Mohamed Warsame Hadrawi is one of the great moral and Peace Crusaders of our time whose lifelong dedication to the fight against injustice, war mongering and acts of violence won him the admiration of many peace-loving Somalis everywhere."
2012 Prince Claus Laureate Hadraawi - Video on Hadraawi's poetry and influence 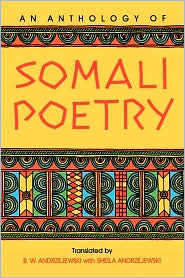 My hero is Hadraawi. He is the most important hero in our country and he is Somalia's most famous poet...