by Brady from Anchorage

Harry Houdini was a real American hero. Although born in Hungary, he moved to America with his family at age four and became an influential figure in American history. He solved incredible problems, faced staggering adversity, even carried a secret identity! Yes, Houdini was both a superhero and a human hero. There are five distinct traits that make him a hero. These are secret identity, magical powers (a.k.a. magic), escapology, battling evil, and being an embodiment of freedom.

Harry Houdini was actually a stage name, but it was also a secret identity. His real name was Erik Weisz. When his family moved to the United States, his first name was changed to Ehrich, and his family's name was changed to Weiss. Finally, he had a pet name derived from Ehrich: Ehrie. When Ehrich began his career as a magician, he used the name Harry Houdini. "Harry" simply rhymed with his pet name "Ehrie," and Houdini was attributed to a French magician named Jean Eugene Robert-Houdin. Thus, while Harry Houdini saved the day by escaping from unbelievable odds, Ehrich Weiss lived quietly in the background, ready to switch identities in an instant. 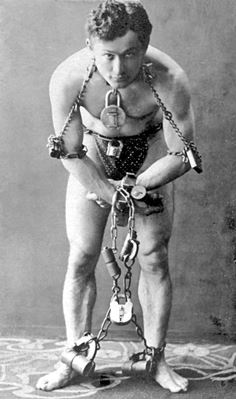 Magical powers: some heroes have them, others have a different type. Besides being able to perform magic, Houdini's true magical gift was the ability to entertain. More specifically, to wow audiences. Houdini was only human, but that did not stop him. He went above and beyond his physical and mental limitations in order to entertain the world. Oftentimes, he would put himself at risk in order to perform for people. This made him an influential character for everyone to see. He put his life and soul into his work. This is another common trait for ANY hero. And for Houdini, it all goes back to his desire to craft his magical powers.

Escapology was one of Houdini's most successful ways of captivating audiences. This trait demonstrates his superb problem-solving skills, fundamental for superheroes and everyday people alike. He started out with handcuffs and straight-jackets. As these grew more classic, he faced many problems: How do I improve the escapes? What new escapes can I create? How far should I go? Houdini managed to solve all of these issues. He grew more daring as time passed, testing his bravery (another hero trait), as well as his mental and physical endurance. Again, he put his heart and soul into his work, another fundamental characteristic of all heroes. 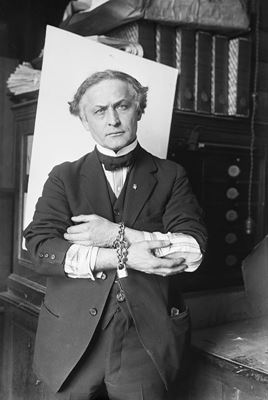 To most, Houdini does not come to mind when one thinks of this virtuous task. However, Houdini believed a certain "evil" existed during his lifetime, and he spent the last years of his life fighting it with all his might: psychics and mediums. Beginning around the 1920s, psychics and mediums began to appear and rapidly increase in number. They claimed to be able to contact the dead, and when paid could summon the soul of a loved one. This was right after World War I, so many people lost family members, friends, etc. Houdini believed these "mediums" were taking advantage of innocent people, including his friend Sir Arthur Conan Doyle. He saw the mediums as an injustice and spent the last years of his career exposing them for the frauds many of them were. In this sense, he battled against an evil force. Exposing mediums not only became a passion, it also became part of his act! He managed to expose every medium he challenged. One medium managed to give him trouble, but in the end Houdini rose victorious. 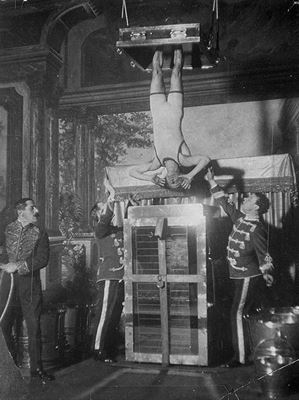 Houdini embodied the American ideal of freedom. Houdini lived in a time when far too many people had far too little rights. Many people felt trapped within cities and places and felt like they couldn't escape. Houdini solved the problem. He gave hope to thousands of Americans who believed they were trapped; I mean, if he can escape from a giant milk can while in a straight-jacket, how hard can it be to escape/solve our own problems? In addition to entertaining audiences all over the globe, he gave hope to men and women around the world.

Harry Houdini - Master Magician
Houdini: The Man Behind the Myth from PBS.org - AIRED JANUARY 24, 2000 Film Description In 1912 Harry Houdini was lowered into New York’s East River in a crate wrapped in chains. The crowd of spectators gasped; reporters pulled out their stopwatches. Houdini was out in less than a minute. The resulting media blitz was just one of the spectacles that forever established Houdini as "The World’s Greatest Escape Artist."