by Madeline from Manhattan 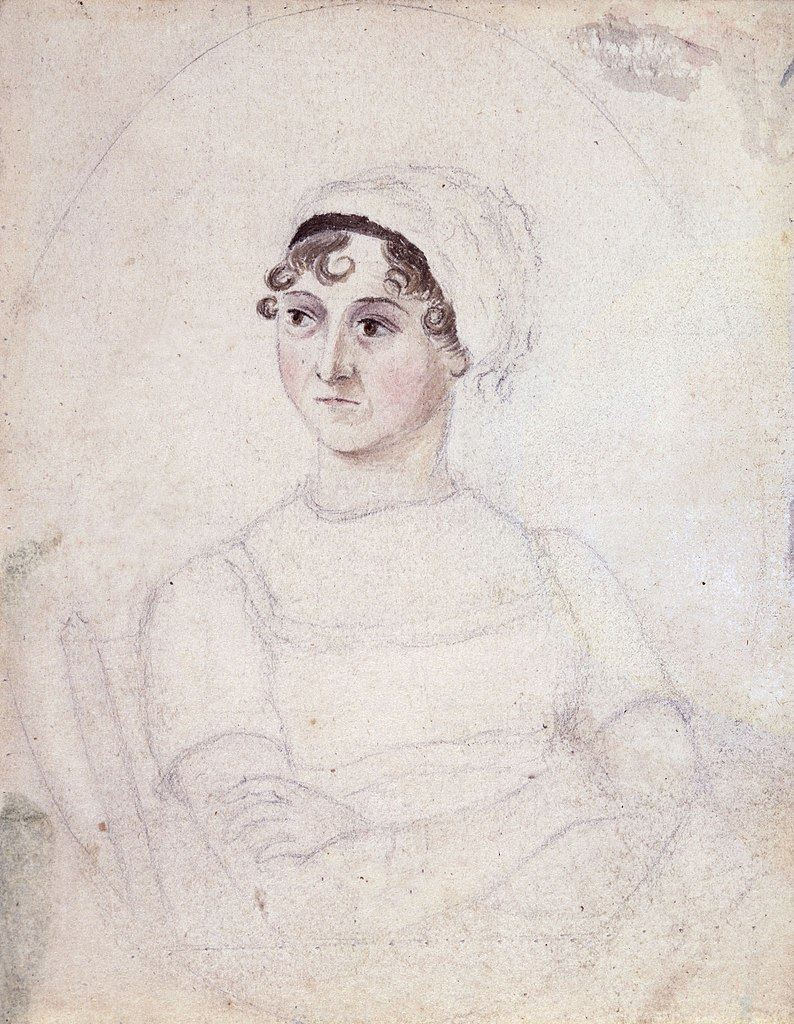 Jane AustenNational Portrait Gallery [Public domain]Few writers have the opportunity to truly affect a life. Of course, that is the point of writing--to tell a story, to share experiences and wisdom with the reader--but few can truly accomplish it. Jane Austen, however, went above and beyond this calling. She took her words, arranged them and rearranged, and turned them into something beautiful. She made people laugh and cry and she became a legend, even after she died at the age of 41. Jane Austen was not only a pioneer for beginning the movement of female authors, but she also became an inspiration through her bright wit, as well as her realistic yet lovable protagonists and supporting characters.

In the time period Jane Austen lived in (the Regency era), women writers were scarce. The few who were brave enough to live their dreams were disowned by their families and received little pay for their work. During her childhood and adolescence, Ms. Austen was discouraged and reprimanded for pursuing such a career. Though she read her work regularly to her family, who all enjoyed her writings immensely, she was encouraged to marry and settle down like all supposedly respectable girls of that time. While she was engaged numerous times during her adulthood, Ms. Austen never married and followed a life of writing. She wrote anonymously--and simply went by the pen name 'A Lady.' Essentially, she did this to prove that women were intellectual and could, in fact, write. She was known for her novels and no doubt inspired many women to believe in what they were told was impossible.

Even when she was young and still in the early stages of her life, Jane Austen was renowned for her wit. Her friends and family, though disapproving of her aspirations to be a writer, were always proud of her wit and bright sense of humor. This is evident in her writing, in every word she penned. Her realistic and, at times, satirical descriptions of Regency England are referenced to this day, and are considered to have been part of a growing movement of realistic fiction. Her intellect is also displayed in the dialogue in her novels. Though hard to read for some, the words spoken between her characters are intelligent and often biting, revealing Ms. Austen's disdain for the upper class and the barely restrained viciousness behind their polite manners.

The most notable factor in Ms. Austen's work, however, were her characters. The most famous of these include Elizabeth Bennet and Fitzwilliam Darcy (of Pride and Prejudice). These, however, are only the most famous of her numerous characters--others include Emma Woodhouse (Emma) and Maryanne and Elinor Dashwood (Sense and Sensibility). These clever characters, though obviously fictional, are remembered, as mentioned before, for their witty and fast-paced dialogue. The emotions are realistic as well. Many of Ms. Austen's readers can find themselves identifying with the protagonists--in their mistakes and triumphs, learning from them and enjoying Ms. Austen's inevitable trademark 'happy ending.'

When she was writing her works, Jane Austen didn't know she was to be a legend one day. She wasn't aware of the fact that her works would become one of many anthems describing and proclaiming stories of 'true love.' She simply wrote what she saw and felt, and that--more than symbolism and pseudo-intelligence--is what matters most when it comes to writing. That is what makes Jane Austen--if not a hero--a legacy, at the very least. She was true to what she wanted, saw and believed; she didn't censor what she wrote so she wouldn't offend someone, but she remained elegant, all the same. In that way, she affected the lives of her readers. In that way, she became immortal.

A pretty girl
writes by candlelight/
Her writing the only sound
in the endless night/
She listens closely
for the creak of the door/
Which warns her of words
that shake her to her core/
"You can't do it,"
they all seem to say/
"Just write after you're married
so you'll be out of the way"/
But she knows she is meant
for a writer's life/
So she continues to write
into the endless night.