by Motoki from San Diego 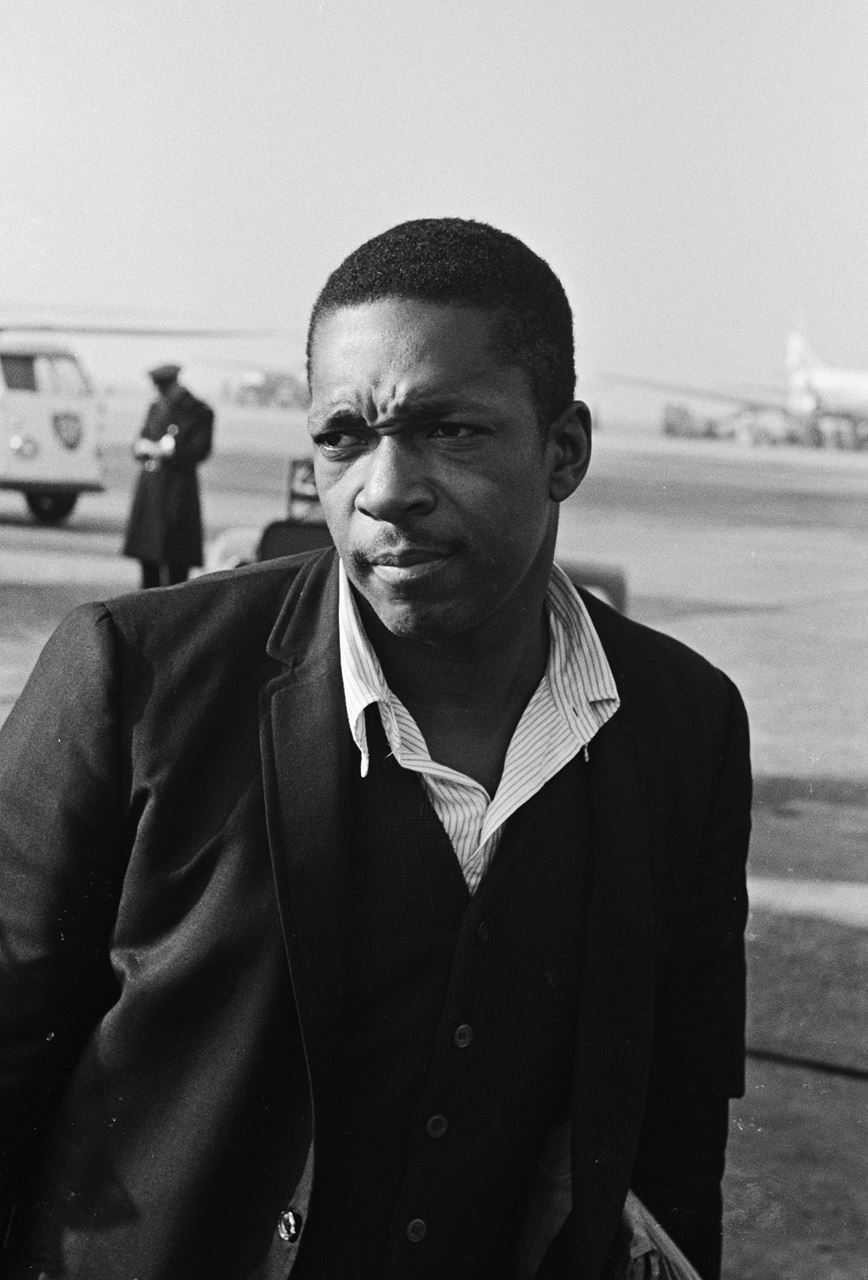 John ColtraneGelderen, Hugo van / Anefo [CC0]There are approximately 30 saxophone players in Del Norte's band and more than ¾ of them have an inspirational person to be like, and it is all the same. Also professionals such as Eric Marienthal and Kenny G has the same person. This person who became dream and goal of new generation was a person who is known for being father of modern saxophone, John Coltrane. John Coltrane was a black male born in Hamlet, North Carolina 1926 and he picked up saxophone in his school days. He became famous for his skill with saxophone, specifically tenor, and many famous bands such as Miles Davis and Duke Ellington. A hero must possess a will to fight for what is right for the society and humanity, have mental strength for his own self and be able to be inspiration to next generation of kids. John Coltrane is not just a jazz saxophone player, he is a true hero because he fought against racism, had strong mental strength, and continues to inspire new generation of saxophone players.

John Coltrane is not just a saxophone player but he is also a hero for he fought against racism without using violence. Japan is one of the country that has many people with racism, recently there was a case involving a black soccer player but still, "In 1972, "A Love Supreme" was certified gold by the RIAA for exceeding 500,000 units in Japan. This jazz classic and the classic album "My Favorite Things" were certified gold in the United States in 2001" (Jowcol Music). Even in a racist country like Japan, Coltrane was able to be certified for gold by RIAA which is impressive at the time since many African Americans were still disregarded and most were more likely to be ignored or violently abused for their race. With his minority and negative status, many could stopped and chose another path to travel into but Coltrane however, decided to move on with his things he liked to do. He was also able to sell and get awarded for his Album which consisted his own playing in a racist society. In a society where racism exist, it is hard for African American to make his own album and sell it to white people but some musicians were able to: "The group, enlarged to a sextet with the addition of alto saxophonist. Cannonball Adderly, is still today the most famous and influential small group in jazz history. In the years 1959 and 1960, John would participate in the recording of two of the most famous jazz albums ever recorded: Kind of Blue, recorded with Miles, and Giant Steps, which John recorded for Atlantic, his new label, with his own band" (Barron) With negative position like Coltrane's, it is easy for people to quit and find own life in a homeless style in bad conditioned place. Also with his skin color it is surprising that he was able to make his own album at the time when racism was a big problem in US. With people criticizing him for his racial status, he was not in a situation where he can sell his own album. He was able to fight against racism by selling his criticizers his own solo and make them listen to it since jazz was still popular at the time. John Coltrane fought against racism by exceeding the normality and being rewarded by his criticizer for his playing and music. 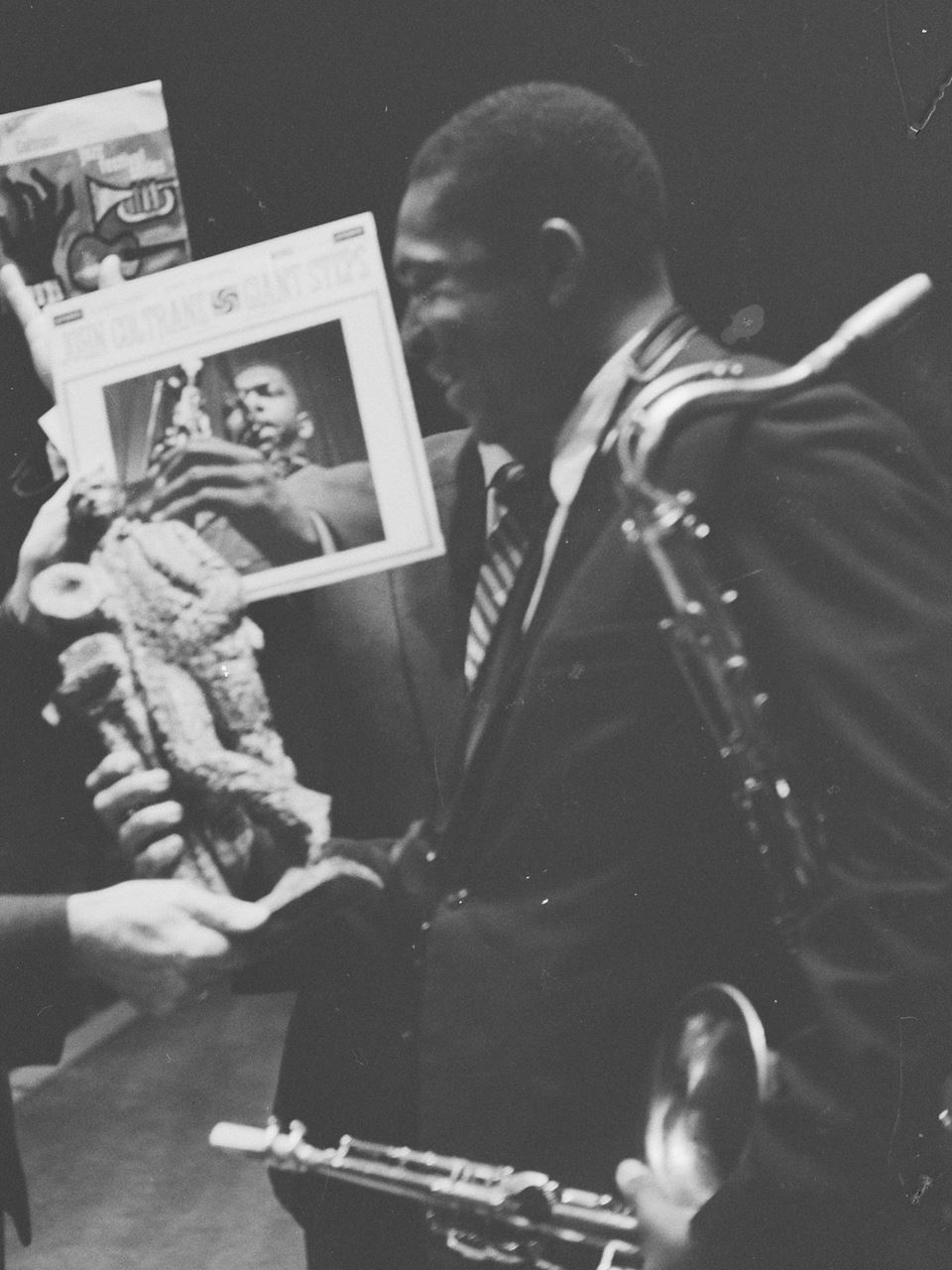 John ColtraneDave Brinkman (ANEFO) [CC BY-SA 3.0]John Coltrane had strong mental strength to stop what he was addicted to and keep on doing something even when he was criticized for the action. At one point, Coltrane was addicted to drugs and he was not able to quit for a long time. He was fired from a band for his addiction: "Coltrane came to prominence when he joined Miles Davis' quintet in 1955. His abuse of drugs and alcohol during this period led to unreliability, and Davis fired him in early 1957" (Britannica Biographies). Coltrane was fired from Miles Davis' band because he was addicted to drugs and alcohols. Many researches have proven that even smoking takes a lot of mental strength to quit but drag addiction takes more. Since drugs are more addictive than a normal cigarette, it was harder for Coltrane to quit and get rid of his addiction. He was able to rejoin Davis' band for his strength and thoughtfulness to quit. Coltrane also kept playing as a saxophonist even after many has criticized his style of playing: "One of the techniques he was developing was to borrow riffs for his solos from music of other cultures, such as India. But many people did not understand what he was doing. They took this experimenting for bad saxophone playing. Music critics who wrote for newspapers and magazines were sharply divided about John Coltrane. Some thought his playing was not really jazz; others recognized that he had something unique to say, if the listener would only be open-minded and patient" (Barron). Many people criticized Coltrane because he took music styles from other countries and associated them with his own solo and idea of his music. When people are criticized, the first thing that comes up in people's minds are rage and quitting. Coltrane was able to keep going playing in style he played because of his strong mentality to do what he pleased and kept playing his Jazz saxophone. Coltrane was always able to stand up after he falls because he had strong mentality to do so.

John Coltrane - The official site of the jazz legend