by Anika from Roseville

A hero. Someone who works to improve the lives of others, someone who is determined to bring good into this world. They are someone admired for their great and compassionate deeds, someone who puts others before themselves. Most importantly, a hero expects no other reward for their actions than sheer gratitude given by the people they’ve helped. They inspire others through the kindness in their hearts. My hero is Jaime Escalante. 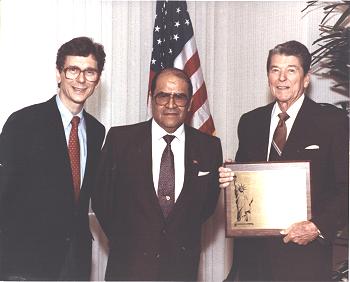 Jaime Escalante was born on December 31, 1930 in La Paz, Bolivia to 2 teachers. Following in his parents' footsteps, Escalante became a teacher as well. In the 1960s, he left Bolivia to seek a better life in America. Determined to teach in America like he had back home, Escalante taught himself English and earned another college degree. In 1974, Escalante took a job teaching math at Garfield High School in East Los Angeles, known for drugs, violence, and gangs, to troubled students with horrible home lives. He strove to bring his kids to their full potential, working with them to help them understand mathematics. Soon, he started an advanced math program for many of his students. He worked them hard, teaching them Calculus and making them show up to school an hour early each day and stay late after school was over. Then, in 1982, his largest class of students took an advanced placement test in Calculus and every single one of them passed. However, instead of giving credit to Escalante for his brilliant teaching, the testing company accused the students of cheating because of their amazingly high scores and the fact that they all missed the same questions. Jaime Escalante was outraged because he thought the testing company was guilty of racism; he thought the students were accused because of their Hispanic names and poor backgrounds. This sparked an idea in Escalante. He was determined to keep his students' confidence and self-esteem high, so he convinced them to retake the advanced placement test. This time, the test would be even harder, so Escalante made his students stay even later after school and forced them to practice their equations over and over again, encouraging them to study hard so they could prove to the world what they are capable of accomplishing. The students took the test and the scores arrived – every student passed with flying colors! This was the greatest event in the history of Garfield High School, proving the testing company wrong and showing what an amazing teacher Jaime Escalante was.

Escalante received many awards for his contributions to the field of mathematics, such as the Presidential Medal for Excellence, and he was admitted into the National Teachers Hall of Fame in 1999. In 1988, a book was written about him titled Jaime Escalante: the Best Teacher in America, and an inspiring movie called “Stand and Deliver” was produced about his journey to bringing his students to greatness. Sadly, Escalante died on March 30, 2010, at age 79, but his legacy remains in every student he taught. He will never be forgotten because he brought true beauty out of a bad situation.

Jaime Escalante is my hero because he gave kids from a bad area a brighter future by teaching them the value of learning and the benefits of a good education. He encouraged them to work hard so they could make something great out of their lives. He didn't only encourage his students to work hard and retake the extremely hard Calculus test for the benefit of his own reputation, he did it to make them feel good about themselves - so they would be proud of what they had achieved. His incredible work touches me. It motivates me to continue to try hard in school so I can reach my life’s goals and aspirations. He taught me that the sky is the limit – you can achieve anything with hard work and determination, the same lesson he taught his students. You just have to believe. As Jaime Escalante said, "We are all concerned about the future of American education. But as I tell my students, you do not enter the future -- you create the future. The future is created through hard work." He also once said, "One of the greatest things you have in life is that no one has the authority to tell you what you want to be. You’re the one who’ll decide what you want to be. Respect yourself and respect the integrity of others as well. The greatest thing you have is your self image, a positive opinion of yourself. You must never let anyone take it from you." These words inspire me to become someone great. They inspire me to reach for the stars, and go for my dreams, without letting anyone bring me down. He is a motivation to everyone, young and old, because his inspiring words and heroic actions show people that anything is possible. Jaime Escalante is the true example of a hero - someone who works to improve the lives of others, someone who puts others before themselves, and most importantly, someone who does not expect a reward for their actions. Heroes help others through kindness in their hearts.

Escalante was far more than a teacher, he was a great hero. He changed his students’ lives with his encouragement. He saw potential in his students that they had never seen before and pushed them to amazing heights. Escalante not only touched his pupils, but he touches everyone who reads his story. In my mind, he will never be forgotten. I will always remember him as a man with a most valuable lesson – strive for excellence and never give up on your hopes and dreams.