by Emmy from Saddle River

My hero is Jeremy Glick. He was an amazing person who was confident in what he did. He was on the flight 93 on September 11th, which was a horrible day. He almost saved the plane. Not only was Jeremy Glick a national hero, he was my dad.

My dad was creative. He was an actor, a poet and he played the violin. In 1982, he got the role of Curly in “Oklahoma”. That was the lead role! Every practice he tried his best. He was also very good at the violin. I play the violin just like him. He started in 3rd grade and so did I. I want to be just like him.

To laugh often and love much
To win the respect of intelligent persons and the
affection of children
To appreciate beauty,
To find the best in others,
To leave the world a bit better,
whether by a healthy child, a garden patch
or redeemed social condition,
to know even one life has breathed easier
because you have lived.
This is to have succeeded.

Soaring through the clouds,
Arms spread, wind whisking on the back.
Unaffected by the laws of gravity,
One symbol of soul and freedom.
Disrupting the peace with a
Crack like thunder,
Lead whistled through the air.
Piercing pain,
Arms fold in.
The graceful glide metamorphoses
into as chaotic dive.
The life meets the ground
And movement is no more.
But once again, Free.

Jeremy was caring. On August 31st, 1996 he married Lyzbeth Makely. On June 18th, 2001 they had a baby named Emerson after Jeremy’s favorite poet. That's me! He always put family before himself. He always tried to go to my Aunt Joanna's ice skating competitions. As a kid, he always wanted to be a hero. He watched a show called "Emergency"; he played John the fireman. Every one of his siblings wanted to be John so they made a game up called John and John. He was the 3rd oldest of his siblings. He could make anyone smile.

Jeremy was an athlete. He did judo, wrestling and lacrosse. Judo is like karate and wrestling mixed together. He was supposed to get his last black belt in 2007. He did soccer and lacrosse at school. I go to the same school too. He was amazing at every sport he did. He even skied on Windham Mountain! That is where I ski too. I am proud of him.

People say to me in class, “Wow, you have a cool dad!” It is not that fun though. It’s sad and a little scary. Sometimes I get a little scared to get on a plane. I cry sometimes, like when I used the book Your Father's Voice, a book written by my mom and Dan Zegart. My mom told me most people who try to crash a plane want money or jewels. These terrorists wanted to kill many innocent lives. That’s why we have more security systems in the airports now, so don’t worry.

My dad loved me more than anything. He would not even let the nurse at the hospital take me away. He was scared they would mix me up with another baby. I ran a 5k recently. My dad’s siblings were entered in it. My mom said he would want to beat them but in the end he would have stayed with me. On the plane he called my mom and told her he loved us. September 11th was a sad day.

On that day many innocent people died. Four planes crashed. One into the Pentagon, two into the Twin Towers and my dad’s into a meadow in Pennsylvania. It was going to go into the Capitol Building. He saved many important lives. Jeremy was a hero to many people. He really was John the fireman except he was Jeremy the plane helper!

Jeremy's Heroes - "Provides financial support and assistance to school-age children to encourage their ability to participate and succeed in athletics. In return the athletes will demonstrate a commitment to their community through their sports. " 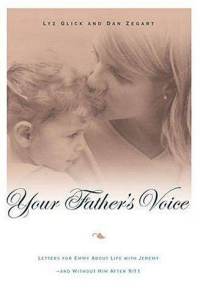 Your Fathers Voice: Letters for Emmy About Life with Jeremy--and Without Him After 9/11
Lyz Glick