''If ye break faith with us who die We shall not sleep, though poppies grow In Flanders fields.'' - John McCrae 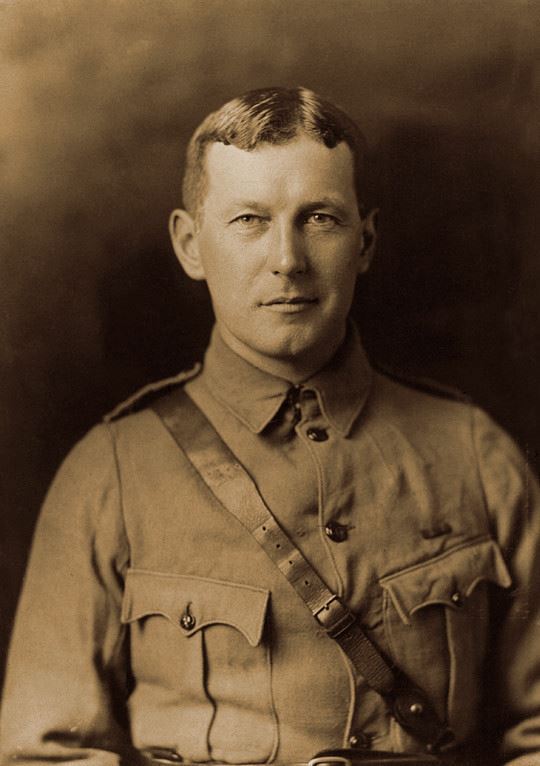 John McCraeWilliam Notman and Son [Public domain]Merriam Webster dictionary defines a hero as a person who is admired for courage or noble qualities. And a hero like that is Lt. Colonel John Alexander McCrae. Born on November 30, 1872 in Guelph, Canada to a military family, McCrae inherited a strong sense of pride and devotion for his country. He joined the Canadian Militia Reserve at age 17 reaching the rank of Lieutenant. After graduating from the University of Toronto with a bachelor's degree in medicine, a gold medal, and a fellowship award from McGill University in pathology, he volunteered for service as commander of D Battery, Canadian Field Artillery during the Boer War in 1899. After the war ended in 1901, McCrae at the rank of Major resigned from military so he could continue practices in the medical field, helping publish several medical journals and encyclopedias. When World War I broke out in 1914, McCrae enlisted with his faithful horse, Bonfire, in England. He was assigned to No. 3 General Hospital in the 1st Brigade Field Artillery. On May 3rd, McCrae was at the front line during the Second Battle of Ypres in Belgium when his close friend Alexis Helmer was killed. Mourning and angered, McCrae penned the inspirational poem "In Flanders Fields" in Helmer's memory. On January 18th, 1918, Lieutenant Colonel McCrae died of pneumonia at the age of 45. He was buried at Essex Farm Cemetery with full military honors, but his legacy lives on. Through his devotion to country, bravery and talents, Lt. Colonel John McCrae represents a true hero.

John McCrae was a patriot who devoted his life to his country and prepared to die to defend it. Shortly after graduating high school, "At 17, he joined the Canadian Militia [Reserve] as a private, eventually becoming a lieutenant in the Canadian Field Artillery." (http://net.lib.byu.edu/~rdh7/wwi/bio/m/mccrae.html). John McCrae's strong sense of patriotism and duty to serve at a young age made him a role-model and inspiration for other enlisted men. Also, McCrae's talent as a leader led him on the fast track up the ranks, quickly reaching the rank of Lieutenant. In 1880: "On the outbreak of the South African [Boer] War, McCrae postponed acceptance of the Governor's Fellowship in pathology awarded him by McGill University, Montreal. Instead, he volunteered for service as commander of D Battery, Canadian Field Artillery." (http://net.lib.byu.edu/~rdh7/wwi/bio/m/mccrae.html.). Postponing personal glorification, McCrae was eager to fight and defend his country. McCrae's selfless act proves true love for his country and his will to give up everything for it.

John McCrae was a man who dedicated his life to his country, displaying true love, devotion and patriotism. McCrae demonstrates bravery during the heat of the battle and in the face of the enemy, but yet continued on refusing to retreat. During the Battle of Ypres, McCrae's battalion endured 17 days of heavy assaults and bombardments against their position in Flanders's Field:

"At 4 PM, during this Second Battle of Ypres, the Germans used deadly asphyxiating chlorine gas for the first time in warfare. Shortly after this gas attack the First Brigade Canadian Field Artillery was ordered to a position by the Ypres Canal, where they held out under almost continuous heavy artillery bombardment for 17 days-'seventeen days of Hades,' in McCrae's words. Many French Colonial troops were blinded, gasping for breath and asphyxiated, with pulmonary edema; others were terrorized and fled, leaving the Canadian left flank uncovered. The Canadians rallied with great courage under fire, took the offensive and inflicted a bloody defeat on the Germans." (Carter).

McCrae and other officers who rallied troops forward when men were dropping like flies proved fearless bravery and ultimately gave the Canadians the victory. McCrae treated the wounded non-stop, saving hundreds of lives and acting as a model to follow after. In McCrae's diary, an entry reads: "never-ending stream which lasted day and night for seven days without cessation: in all some five thousand two hundred cases passed through our hands...wounds everywhere. Legs, feet, hands missing; bleeding stumps controlled by rough field tourniquets; large portions of the abdominal walls shot away; faces horribly mutilated; bones shattered to pieces; holes that you could put your clenched fist into, filled with dirt, mud, bits of equipment and clothing, until it all became like a hideous nightmare, as if we were living in the seventh hell of the damned." (Carter). Constantly treating others, ignoring personal under heavy enemy fire and bombardments, must take lots of courage and bravery. A normal man wouldn't be able to undertake the exhausting job he did. Lt. John McCrae preformed countless operations on the wounded and injured under the most stressful condition, showing courage and bravery. 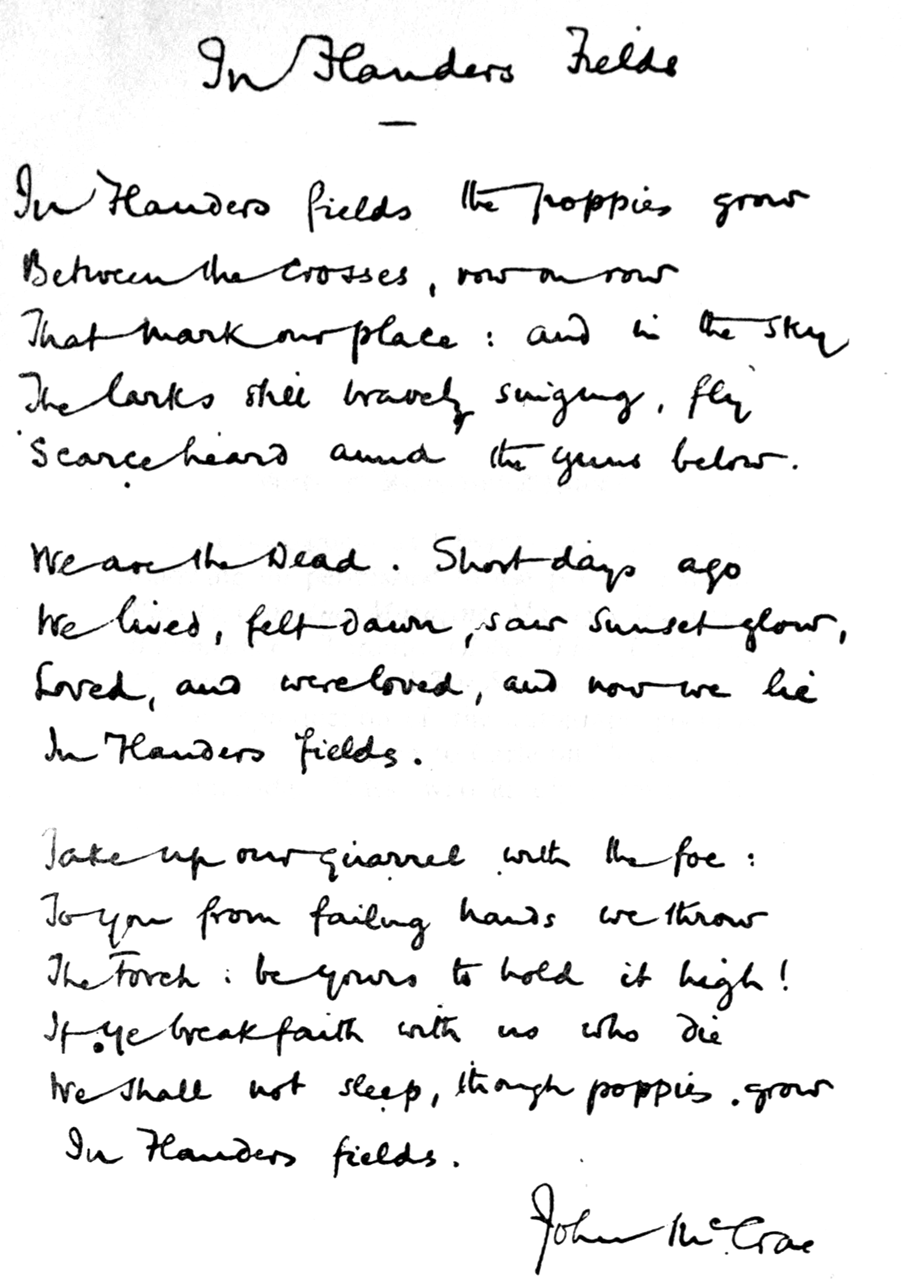 "In Flanders fields the poppies blow
Between the crosses, row on row,
That mark our place; and in the sky
The larks, still bravely singing, fly
Scarce heard amid the guns below.

We are the Dead. Short days ago
We lived, felt dawn, saw sunset glow,
Loved and were loved, and now we lie,
In Flanders fields.

Take up our quarrel with the foe:
To you from failing hands we throw
The torch; be yours to hold it high.
If ye break faith with us who die
We shall not sleep, though poppies grow

McCrae wrote this poem to mourn fallen friends but also to let out his anger against the enemy. This poem must have inspired other men with his passionate writing, strengthening their cause and morale. McCrae, being an exceptional writer was part of many exquisite clubs, such as: "a member of the Shakespeare Club, and was invited to join the Pen & Pencil Club, an exclusive group of artists and writers which included Stephen Leacock among its members. As well as being a poet, McCrae was an accomplished sketch artist, who drew numerous scenes of his travels in South Africa, the United States, and Britain" (http://net.lib.byu.edu/~rdh7/wwi/bio/m/mccrae.html). One must show great talent and skill to be invited to clubs such as the Pen & Pencil Club. McCrae was also a man of many interests who adored nature and loved the simple things in life. John McCrae during peace time was an bright man that found joy in the simple things in life and sketching it on paper.

Possessing the heroic qualities of patriotism, bravery and great talent, Lt. Colonel John McCrae represents a true hero. McCrae demonstrates patriotism through his selfless service to his country. Horace McFarland describes patriotism: "It is the love of country that has lighted and keeps glowing the holy fire of patriotism." McCrae would have agreed. Then, during the 17 days of Hades in WWI, McCrae said: "Seventeen days of Hades! At the end of the first day if anyone had told us we had to spend seventeen days there, we would have folded our hands and said it could not have been done" (Hutchcroft). But he didn't proving bravery and courage. McCrae is also an example of a talented man because of his many professions, such as "Canadian physician, soldier, and teacher" (Hutchcroft). John McCrae is an inspiration to because of his "remarkable affinity for people and animals. His many friends and colleagues described him as warm and compassionate with very high principles" (Hutchcroft). His legacy, "In Flanders Fields," is one of the "the most popular English poems of the First World War. It was translated into many languages and used in countless fund-raising campaigns for the war effort. Each year the poem is recited at Remembrance Day ceremonies and memorial services around the world" ( Hutchcroft). Inspiring a whole nation, Lt. Colonel John McCrae fits Merriam Webster's definition of a hero.