Vivian Stringer has been an idol to many people in her life. She is certainly an idol to her three children, one of whom is wheelchair bound for life and requires extensive 24 hour care.

She and her late husband Bill both idolized each other and it made for as perfect a marriage as one can find. Her brother, and Philadelphia lawyer looks up to her as she does to him.

Many of Stringer’s former assistants, coaches, managers and office staff at Cheyney State, Iowa and Rutgers still consider her to be a friend and a role model.

Perhaps most importantly to Stringer is the way that her players, both past and present look up to her. Much of this is epitomized by the number of players who have sat on the bench next to her as assistant coaches. Players such as Michelle Edwards, former Iowa National Player of the Year and current Director of Basketball Operations under Stringer. She looks up to her former coach. She has said it on many occasions. So does Jolette Law, Stringer’s former assistant coach at Iowa and associate head coach at Rutgers who just took over as the head women’s basketball coach in Illinois. Stringer is very proud of her and Law stills looks up to Stringer and will no doubt run many of Stringer’s skeins at Illinois including the patented “55” defense.

The individuals now who most look up to Stringer are the players on her team which went to the National Championship game against Tennessee in Cleveland. Those players saw her through the horrible Don Imus crisis and watched her not only one on one but under a national media spotlight. They spent weeks with her after the Final Four, watching her and the confines of her office, at her house in Princeton or on national t.v. answering and deflecting questions both invasive and totally topical to the events at hand.

When asked many of those players have spoken up and noted that Stringer is indeed their personal role model.

Stringer handled the recent Imus controversy with dignity and grace. It was noted by journalist and commentators throughout the country as well as by numerous individuals in the basketball world. More importantly it was noted by her players. The players on her team right now that went to the National Championship game against Tennessee in Cleveland and observed her demeanor after that game and throughout the 16 days of the “Imus controversy.”

Many of them were willing to speak freely about her impact on their lives, not only as a coach but as a mentor and as a friend.

The following are some samples of what her existing players have said about her as their role model. Rashidat Junaid, back-up center said that:

“Coach Stringer is my hero because not only does she teach me lessons on the court but she also teaches me life lessons off the court. She believes preparing her student-athletes not only physically, but mentally. She teaches us that mental strength is very important not only in basketball, but in life.”

“Coach Stringer is my hero because …. she is a strong women who is able to persevere despite all the difficult situations in her life. Only hero’s can touch other’s lives in the special way that she does.”

Essence Carson, the media star of the Imus affair adds that:

“Coach Stringer is my hero because she epitomizes strength. She is strong in her convictions and is an amazing human being.”

“Coach Stringer is my hero because she inspires everyone she has ever touched to be a better person. She fights for women, minorities and what she believes in. She is an example of perseverance throughout a lifetime of trials. She inspires all and is a mother to many. I love her.”

Tasha Pointer was the first heralded recruit that Coach Stringer brought in to Rutgers. After she committed many other great players from the mid-west also committed. She came to Rutgers not because it was Rutgers but because from her perspective it was Vivian Stringer University. Since her graduation she has coached at Columbia, Xavier and now she is back at Rutgers as an assistant coach under Stringer. Coach Stringer remains one if not the most significant inspiration in her life. She has instilled much into Pointer both as a person and as a coach. Pointer notes that:

“Coach Stringer is an inspiration to me because of the obstacles she has faced and overcome. My admiration for Coach Stringer goes way beyond coaching strategy to the hard questions and answers that we as people face in life. Those things include being a working professional woman, a mother, a trailblazer and more importantly a leader for other young ladies who participate in the sport of basketball. The invaluable lessons she teaches about character, perseverance and faith continue to resonate loudly in my years as I continue to grow as a woman and collegiate basketball coach.”

There is no better way to judge the impact of a coach than through her players, her former players and her assistant coaches. Opposing coaches might have a motivation with respect to recruiting rivalries, etc. The aforesaid players carry no such baggage.

It is clear that Coach Stringer is admired universally by most if not all of her former and current players. Interviews were conducted with many other players who played for her at Iowa and Cheyney State and all of them were in accord that she is and has been an inspiration and role model for them.

Coach Stringer handled the Imus affair with grace and dignity. That is the way she conducts her life. 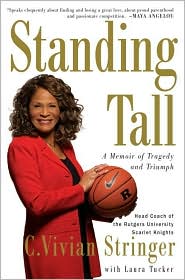