by Nico from Mission Viejo

"We are not permitted to choose the frame of our destiny. But what we put into it is ours." - Dag Hammarskjold 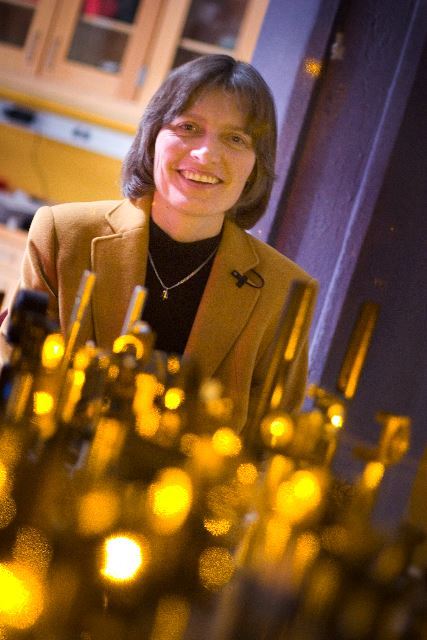 Lene Vestergaard Hau(Photo courtesy of Justin Ide/Harvard News Office) [Public domain]Have you ever heard of "faster than the speed of light"? Have you ever wondered how fast light actually goes? To be precise, light goes at a speed of 299,792,458 miles per second (to put this into perspective, a car on the freeway goes an average of 88 feet per second. My personal career hero, Lene Hau, was able to STOP light! I first learned of my career hero while scrolling through Wikipedia, reading about recent discoveries made by physicists. She particularly interested me because she specializes in particle physics, which I would like to do. Also, as soon as I found out that she had stopped light, I could not help but be more than interested. The discovery stimulated me to ask: "How did she do that?" where other people would say, "Oh, that's cool, I guess." This shows that I wish to be a physicist, discovering more about particles and the "why" behind everything.

This career path, of course, will not be an easy ride. Generally, I must know basic physics and maybe even advanced physics or mechanical/ electrical engineering. Depending on the field I choose, however, whether it is electrical engineering, particle physics, or nuclear physics, I must most likely have at least a bachelor's if not a master's degree in that field. After college, my salary is averaged at about $106,840 yearly in the U.S. by the Bureau of Labor Statistics. Some careers similar to this would are weapon development and mathematics, though arguably mathematicians don't earn as much as physicists. Recent developments in physics have been discoveries such as Lene Hau's stopping of light, diamagnetic levitation of water, and even deep inelastic scattering of electrons on protons. Many recent technological advances, such as super computers and smart phones, are directly related to physics. My personal career hero, however, did not have such 'new-fangled devices' when she was a child.

My personal career hero is surprisingly like me. As a young person, Lene Hau excelled in math and even so much as skipped a grade, like me. Her acceleration in math gave her the skills needed to be a good physicist. Lene went from her high school to Arhus University, where she received her B.S. in 1984 and her Master's in 1988. While studying for her doctorate, Hau went to many places to research, particularly CERN and Harvard University in the U.S. In 1991 she received her Ph.D. She continued research and even became a professor at Harvard, and on February 18th, 1999, the journal Nature published an article about her slowing light to 17 meters per second. She was eventually able to stop light in 2001, but only for a very short time-span was the light stop (one-thousandth of a second). Since 2001, ".Hau and her team were selected by Nature as the "Favorite of 2007 in Quantum Physics" and her team was also selected by the American Institute of Physics as "Top Ten Physics News Stories of 2007"."As is obvious, she is a very successful woman of the 20th and 21st century, and I aspire to be like her in discovering something amazing.

Though Lene Hau may not seem like she contributes much to society, many people also didn't think people like Nikola Tesla would have an impact on our society because electricity didn't seem like such a big deal. Though Dr. Hau is arguably not as smart or scientifically significant as Nikola Tesla, the ability to stop light is could be very useful in many different scenarios, especially when other advances are applied to a machine with it (one example would be a hologram). Most likely, one of the most important points in Lene Hau's career was when the journal Nature added an article in their journal about Hau's work, mainly because this publicity gave her attention, which led her to being more prominent. She has had some publicity after that, such as when a speech was given on her by the Aarhus University, in which the speaker said about Hau, "Your career is a unique one, and you have shown that if talent, persistence and commitment are great enough, there are no limits to what a person can achieve." Though many people still do not know about her, I predict she will become an important figure in science, as she was the first person ever to lead research into stopping light. As anyone can imagine, the stopping of light is not simple task and thus should be seen as a great achievement of humanity because Lene Hau (and her fellow researchers) was able to stop the fastest known object/idea/force.

Though my life interests are very different from my personal career hero's (as in the branch of physics), taking a very similar path to that of Lene Hau's path would definitely allow me to succeed in life. I hope to take IB (International Baccalaureate) Physics in high school, along with Calculus, so that I am prepared for college physics. I hope to be able to find a job where I can work first-hand in physics and technology during high school so that I may be able to get into a better college. While in college, I hope to take different physics courses until I find the one that really interests me the most if I have not already decided by high school. My major will be whatever branch of physics I decide to be in, while my minor will most likely be computer science so I can program the technology I am using to conduct my experiments. In my life, I want to impact the world in such a way that people read about me in history of science books, and they are affected by my inventions in their everyday life. I, as Lene Hau has done, want to do something so incredible that nobody will understand until I apply my invention/discovery to something and create something nobody ever thought possible.