Shattering Hollywood's notorious glass ceiling, Sherry Lansing worked her way up from script reader to become the first female head of production at 20th Century Fox. She went on to run Paramount Pictures for fourteen years, where her movies were known as much for the strong women portrayed in them as for their box-office magic. Titanic, Fatal Attraction, Kramer vs. Kramer, Chariots of Fire, Forest Gump, and Saving Private Ryan (along with other successes too numerous to name) were all brought into being by this legendary producer.

Lansing resigned from Paramount Pictures in 2005 and is dedicating her third act to a life of public service. She has established the Sherry Lansing Foundation, which is committed to raising awareness and funding for cancer research, and also serves on the board of the Carter Center, a not-for-profit human rights organization founded by former president Jimmy Carter and his wife, Rosalynn.

by Sherry Lansing from Los Angeles, California in United States 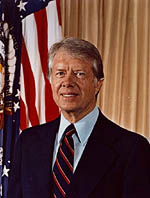 Jimmy CarterDepartment of Defense. Department of the Navy. Naval Photographic Center [Public domain]All too often those whom we admire from afar appear less impressive once we get up close. Yet when I met Jimmy Carter, the opposite was true. The closer I got, the more impressive he became.

For as long as I can remember, President Carter has been my hero. I respected him enormously as a president, but for me where he really distinguished himself was in his post presidency. Each time I saw him interviewed on television or whenever I read one of his books, I was always struck by the same thought--that he is simply the most decent person that I've ever observed. I saw a man who every day seemed to get up quietly, without any need for self-aggrandizement or publicity, and follow his calling to do good. With the creation of the Carter Center he was able to give that vision global reach. In this President Carter is an inspiration to all of us.

And for me, in a very direct and personal way, he was the inspiration for the next (new) chapter in my life. Some time ago, I determined that when I turned 60, I would stop working at my job and pursue a life of public service. I'm evolving into it and it takes time, but Jimmy Carter is the inspiration for my wanting to do it, and for the way I hope to do it. From his example I know that I can get up in the morning and make a difference just by affecting those around me, by doing whatever I can to make a contribution.

While I was still working at Paramount Pictures, I was fortunate enough to meet my hero. Serendipity struck while I was attending a film festival in Venice. It was at an impromptu lunch and we were sitting around the table talking about the people we most respect and idolize. I said that the deceased person that I idolized most was Martin Luther King, Jr., and the living person whom I idolized most was Jimmy Carter. A voice across the table asked, "Would you like to meet President Carter?"

When I left his office that day, I knew that I would leave my job at Paramount at the end of my contract and that I would in some fashion follow in Carter’s footsteps. My foundation, which educates and sponsors research in cancer and other diseases, is all but four weeks old; it is sometimes daunting and I have much to learn, but the example of President Carter inspires me and helps to light the way.

These early weeks of starting my foundation have been the best weeks of my life. I look to the Carter Center for inspiration and as a model. Through the Carter Center, Jimmy and Rosalynn have reached out to prevent conflict and improve health throughout the world. The Carter Center focuses on diseases and other domestic and global issues that nobody else is paying attention to or funding. It has attacked river blindness and guinea worm disease, debilitating diseases that have robbed millions of people in Africa and Latin America of the ability to work, attend school, or lead productive lives. President Carter got pharmaceutical companies to donate medicines to treat the diseases and he got other organizations to donate medical supplies. Then he went to these developing countries to assist the government in distributing those services to citizens.

You don't have to be the president to make a difference. Yes, it helps to have connections, but to me, President Carter follows his belief system first and foremost and that, more than anything else, is what makes him so effective. He’s not dealing with political issues through the Carter Center; he's dealing with global health and human rights. In everything Jimmy Carter does, his charisma, passion, purity and purpose shine through. 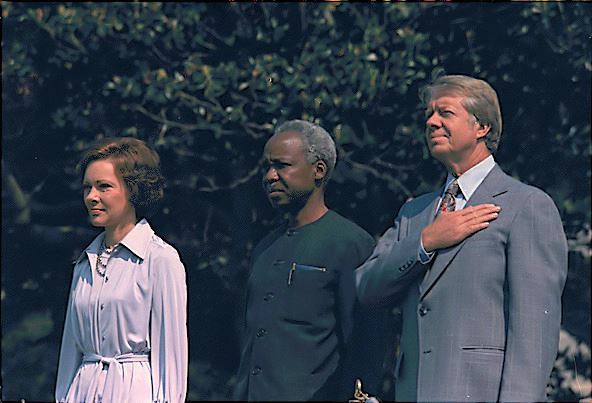 Rosalynn Carter, President Julius Nyerere of Tanzania and Jimmy CarterKarl H. Schumacher [CC0] via WikimediaI said, "I sure would." I didn't know the man (who turned out to be Gerald Rafshoon, a member of President Carter's staff), so I didn't know if it was a joke or a serious offer. Sure enough, two weeks later, Jerry calls me at my office and asks if I could come to Atlanta on such and such date to meet Jimmy Carter. "Absolutely," I said without hesitation.

I was overjoyed. I thought I would go and ask him questions like, "Is it stupid to stop your job when, to the outside world, it looks so great?" or "Is it silly to give up a career in the movie industry to pursue a life of public service...am I making a mistake? "

I landed in Atlanta at about 11:00 P.M. My meeting with President Carter was at 10:30 the next morning, but I was beginning to get nervous. I called my husband and said, "You know, this is about the dumbest thing I've ever done in my life. This is going to be just like when I met Nelson Mandela." He laughed because when I met Nelson Mandela I was so overwhelmed that I couldn't think of anything to say. The conversation went like this. Me: "I'm so honored to meet you." Pause. Mandela replied, "Nice to meet you too." Pause. Me: "I'm so honored to meet you." Mandela: "It's very nice to meet you too, Sherry." I feared that this would happen with Jimmy Carter.

Nonetheless, I arrived at the Carter Center the next morning and was ushered into his office. President Carter was standing, looking out the window. He turned around and there was this big smile on his face and these twinkly eyes that just were so alive. He said, "I’m so happy to meet you." We sat and talked about everything. The conversation just flowed. His wife, Rosalynn, came in the room and eventually we had lunch. It was extraordinary. Six hours later I left.

Jimmy Carter makes you feel instantly at ease. He’s so curious about everything that you're doing, and he makes you feel as if you've known him your whole life. I can't help but think you feel in his presence what people must have felt when they met Gandhi. It is like meeting the kindest, most honorable person in the whole world, who also happens to have a terrific sense of humor. You can absorb wisdom just by being around President Carter, by observing somebody who has no pretension whatsoever and is ruled purely by a desire to help make the world a better place. I learned from him that in my own way I, too, could make a difference. I learned from him that you have to have a passion and care about what you do.

Jimmy Carter with his dog Bozo in 1937, around age 13Jimmy Carter [Public domain] via WikimediaEvery Sunday he teaches Sunday school at his church. He has a great marriage. He has great kids. He's a good person, and he's eternally young. He’s a painter, a writer, and a fly fisherman. He loves life. His face radiates joy. He has a purpose and a passion; he’s not encumbered by all the material things that attract so many people. It’s the people who get up and want to give back to others who have the greatest lives. They are not only the ones making a difference but they have more fun.

Things sometimes come full circle in a funny way. After our initial meeting in Atlanta, President Carter came out to California. We had him over for dinner. His innate curiosity once again in evidence, he was interested in everything and every single person he met.

About two weeks after I announced that I was leaving Paramount Pictures, I received a phone call from him. I was driving to Long Beach for a preview of Lemony Snickett, and President Carter gets on the phone and he says, "Sherry, we just had our board meeting and we unanimously decided that we want you to join the Carter Center board." I burst into tears. To have that kind of validation, and from Jimmy Carter, was monumental. I knew that my decision to leave Paramount and begin my third chapter had been right.

MY HERO thanks Sherry Lansing for contributing this essay to My Hero: Extraordinary People on the Heroes Who Inspire Them.