by Mena from San Diego

Creating Justice for All: Maria Bashir 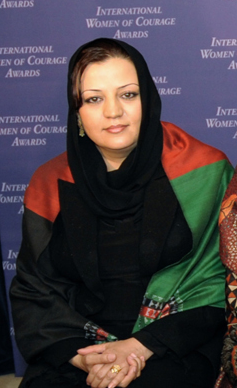 Maria BashirU.S .Government (Department of State) [Public domain]"Curiosity is one of the forms of feminine bravery." (Victor Hugo). Feminine bravery can be seen through many heroic figures. One of the many intelligent women that fight for feminine rights is Maria Bashir. With her curiosity on how it would be to help women, Bashir helped bring justice to the women of Afghanistan. According to "Newsmakers", Bashir was born in 1970 in Afghanistan. She is married to an import-export business owner, and has three children. Bashir received her law degree in 1994, from Kabul University. "Newsmakers" claims through their article that Maria Bashir holds a very important place in Afghanistan. She has been determined to enforce women's rights since the end of the callous Taliban leadership controlled Afghanistan from 1996 to 2001. "Bashir's own home life was challenged too. When she took the job of chief prosecutor in Heart province in late 2006 she began receiving death threats, and asked for a security detail after a council of clerics in the city of Herat issued a fatwa (an official order by a Muslim religious leader) against unaccompanied women in the public sphere" ("Newsmaker"). Bashir possesses many attributes that help shape her into a heroic figure. Maria Bashir holds a courageous and selfless view on life that has helped many women today, which makes her a hero.

Maria Bashir displayed selflessness by living through traumatizing events in order to help create an easier life for the females around her. Maria Bashir proved to be selfless when she ran for prosecutor and endured disturbing threats towards herself and her family. Sunday Times asked Bashir whether or not the menace and mishaps of her life were worth the outcome. '"Is it worth it? Yes,' she said. 'Women can openly tell their stories to a female prosecutor.' She is ready to risk everything to fight for their cause, she said. 'When they bombed my house my message to them was, I will do more to help women. I will never quit'"("Sunday times"). Maria Bashir confidently spoke to the reporter, while portraying selflessness through her reply. She triumphantly marched through life's many challenges; the multiple threats, the assassination attempt, and the bomb that went off near her house that caused her family to relocate. Selflessness means to worry and care about others more than yourself, which is exactly what Bashir did when she became the first female prosecutor. Maria Bashir strives to set equal rights for both genders, even if she has to face the toughest situations. Maria Bashir states, "In my life, I have tried to respect the rights of others, to appreciate and value the capabilities of women, and to encourage these capabilities in other women. When a woman comes to me to seek redress for violations of her rights, I try, with the help of my colleagues, to solve her problems in the shortest time possible" ("States News Service"). Bashir always respects rights of others and appreciates their values and capabilities. Bashir encourages others and aids them more than she aids herself. Maria Bashir is altruistic in various types of ways, one of them being that she fights for who and what she believes in, even if it hurts her in the end. Maria Bashir obtains many heroic traits, but being selfless is one of her strongest. Bashir treats others and puts their problems in front of hers. This trait helps frame her into the hero she is today.

Maria Bashir is a hero because she courageously stood up for what she believed in, even if powerful forces were against her. Bashir and women like her, all lost their jobs after the Taliban took power. Not only did women lose their jobs, but girls were not allowed to go to school because of this lack of education. "She set up a school in her home where girls could come in secret, hiding books and pencils in shopping bags as they entered the house. It was a dangerous time and twice her husband was summoned and questioned about her activities by local police"("BBC News"). Maria Bashir showed courage by risking her, and her husband's life to help young ladies get the education that they deserved. Bashir fought for what she believed in, whether people agreed with her or not. This is one of the many traits she has obtained that makes her a heroic figure. Maria Bashir has been faced with many struggles in her life because she is the first woman to become a prosecutor in Herat, Afghanistan. Some of her hardships include having to deal with the opposite sex not agreeing with the power she posses; '''It is very difficult for a woman to work in Afghanistan, especially if you have an important position,' she said, her eyes flashing once again. 'You have to deal with thousands of political conspiracies and problems'''("New York Times"). Bashir admits that it is challenging to be in her position. In Afghanistan, men are usually the figure in a high position. Maria Bashir is a hero because she admits the challenges and faces reality, which takes courage from anyone. Maria Bashir is a true hero because she carries herself with courage, through any situation she is put in.