M.C. Escher was an acute observer of the world around him and used his artistic and mathematical talents to create works of art that play with perspective and dimension, fantasy and reality, the impossible and the plausible; morphing them all into visual wonderment.

Yet the symmetry and mathematical self-taught mastery within his creations came rather unexpectedly from someone who in his youth had failed several subjects in high school, had a great distaste for mathematics, and never officially graduated. In his professional endeavors, Escher, despite his academic shortcomings, was driven solely on raw potential combined with an intense dedication and a desire to succeed. Even drawing didn’t initially come easily to him, and he was known to complain about his lack of natural ability, which, coupled with his perfectionism, made the process move even slower -- but as per the cliché, Escher’s life story embodies the concept that “you can succeed if you simply put your mind to it.”

Maurits Cornelis Escher was born on June 17th, 1898 in Leeuwarden, the Netherlands, the youngest of four sons of a civil engineer. His grades in school were, for the most part, poor, and he really only excelled in music, drawing, and carpentry. His family hoped that he would study architecture, and after a previous failed attempt at doing so, in 1920 he enrolled at the Haarlem School for Architecture and Decorative Arts. There he met Samuel Jesserum de Mesquita, an artist and graphic arts professor, who convinced him that his skills were best suited for graphic/decorative arts. This advice would come to perhaps be the most pivotal of Escher’s life. De Mesquita taught Escher everything he knew about woodcut printing techniques and helped him hone his skills by allowing him to experiment. (He was also influenced and initially trained by R N Roland Holst).

In 1922 Escher left school and began to travel extensively throughout Europe, making sketches of his various surroundings to later use as material for woodcuts. These travels, particularly his time spent living in Italy and later in Spain amongst the Moorish castles, would serve as life-long influences on his art. While in Italy he met Jetta Umiker whom he married in 1924. They initially lived in Italy for 11 years and had 3 sons. It was Escher’s passion for Italian landscapes, and later for the intricate majolica tiling patterns of the Moors, that led to his fascination with the ‘regular division of a plane,’ and he used lithographs, woodcuts, and mezzotints to practice this art.

The idea of creating images that did not lie flat on the page but rather, took on a multi-dimensional appearance, would consume the vast majority of his artistic career. He loved to play with architecture in his drawings, working with difficult perspectives, visual infinity, and “impossible spaces,” which he is perhaps most famous for. Works such as Ascending and Descending, Sky & Water I, Relativity, and many others present this concept of “impossible construction” or “impossible spaces.” Throughout his career Escher created over 150 colored works using this ‘regular division of the plane’ concept.

Using the sketches that he and his wife made at the Alhambra Palace in Grenada, he created geometric grids using his own characters such as birds, lions, and fish. When his brother Berend saw his woodcuts, he recognized their connection with the mathematical area of crystallography, and sent him Pólya's paper on plane symmetry groups. Though Escher, who had never been strong in mathematics and had no training in it, could not understand the more abstract concepts, he taught himself the 17 plane symmetry principles. His grasp was mostly visual and intuitive. He worked on various color drawings and symmetry types and kept a highly detailed, self-created system of categorical notations about the combinations of shape, color, and symmetrical properties. Without realizing he was doing so, he was studying areas of crystallography years before professional mathematicians would, and ironically, he came to be regarded as a master research mathematician despite his initial feelings towards the field. He later took these concepts to an even greater level, focusing on infinity, hyperbolic tessellations and 2- and 3- dimensional planes, after meeting Canadian mathematician H.S.M. Coxeter, who praised Escher, saying he had achieved ‘mathematical perfection’ in his Circle Limit III etching.

Though Escher and his family spent many years in Italy and in other areas of Europe, his best-known work dates from the period he returned to his homeland, the Netherlands, where he created constantly. Because of the tedious planning and numerous trial sketches involved, Escher’s style of art required a combination of enormous dedication, carving skills, and time. Yet during his life he created over 2000 drawings and 448 woodcuts, lithographs, and engravings. He also illustrated books, and designed everything from postage stamps to murals.

By the 50s he had gained immense popularity and was a coveted international lecturer. In 1955 he received the Knighthood of the Oranje Nassau and was often commissioned to create work for international dignitaries. In 1958 he was featured in Time magazine and gave his first important exhibition. In 1970 he moved to a retirement home for artists in the Laren, the Netherlands, and passed away on March 27, 1972.

M.C. Escher used his perceptive eye, keen mind, manual dexterity, and artistic capacity to create some of the world’s most fascinating images, as captivating today as they were over a half century ago. Working with woodcuts and lithographs to explore mathematical relationships, perception, and dimension, this Dutch master is exalted as perhaps the greatest graphic artist the world has ever known.

The official M.C. Escher Website - where you can find information about the use of M.C. Escher's work, a short biography, news, bibliography, links and some fun stuff like a Virtual Ride through some of his works and even watch and listen to an M.C. Escher interview on his life and work!
M. C. Escher: From Wikipedia, the free encyclopedia - offers a detailed biography, various links, resources, images, and more.
Escher and the Droste effect : Applying mathematics to Escher's Print Gallery -
This website aims to visualize the mathematical structure behind Escher's Print Gallery.
National Gallery of Art - M.C. Escher: Life and Work: - The Dutch artist Maurits C. Escher (1898-1972) was a draftsman, book illustrator, tapestry designer, and muralist, but his primary work was as a printmaker.
M.C. Escher Biography -
This biography is condensed mostly from the biography written by Bruno Ernst for the book M.C. Escher - His Life and Complete Graphic Work, © 1981, with some material from original essays by M.C. Escher. 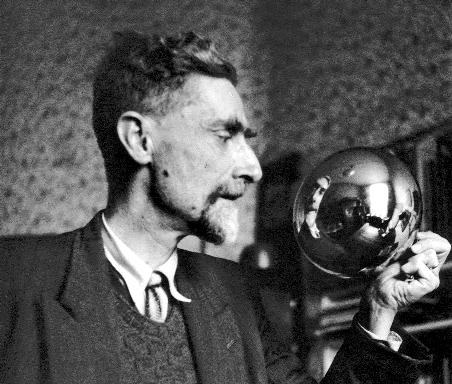 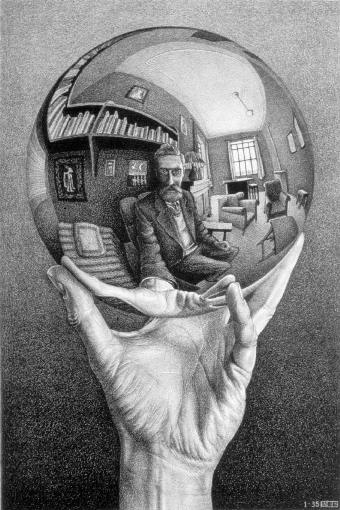 Fun Fact: Did you know that, like Michelangelo, Leonardo da Vinci, Dürer and Holbein, M.C. Escher was left-handed?

"The 'flat shape' irritates me - I feel as if I were shouting to my figures, 'You are too fictitious for me; you just lie there static and frozen together; do something, come out of there and show me what you are capable of!' So I make them come out of the plane." - M.C. Escher