by Francesca from San Diego 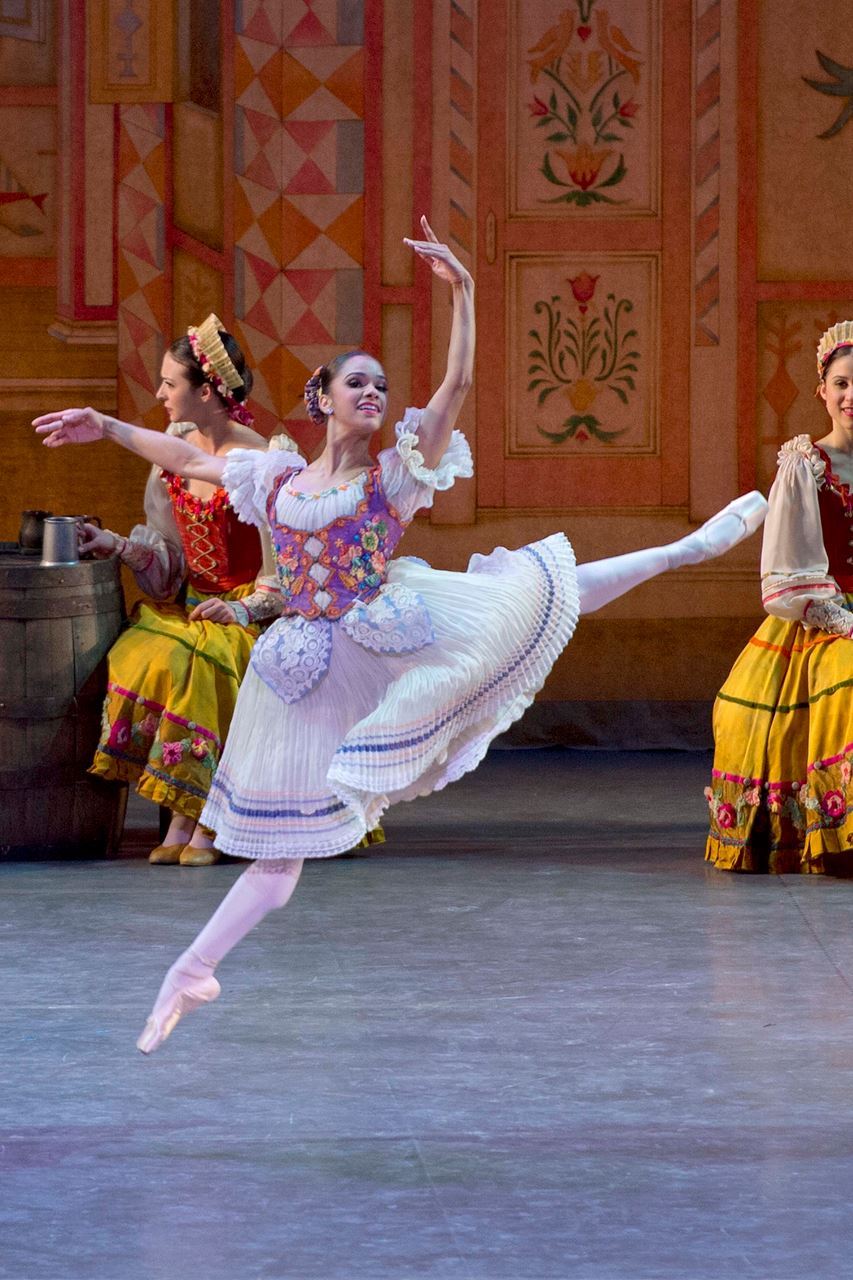 Misty CopelandPhoto by Gilda N. Squire via Creative Commons" I believe in human beings, and that all human beings should be respected as such, regardless of their color."(Malcolm X). Malcolm X does a marvelous job portraying the hardships of racism through this quote, hardships felt by my hero, Misty Copeland. In 1982, a girl with a big aspiration was born. Little did this girl know that her ambitions would unlock the door of racism and break the stereotype of the "music box ballerina" forever. Throughout her childhood Copeland was discriminated for her race and home life. Later she would experience this injustice during her ballet career. "Born in Kansas City, Missouri, in 1982, Copeland grew up in Southern California and has several half-siblings... Misty Copeland went from near poverty as one of six children to a famous ballerina. She is the third African American soloist for the American Ballet Theatre and the first African American soloist to perform for the troupe in the last twenty years." ("Misty Copeland"). "In the summer of 1999 she won a spot in the Summer Intensive Program at the prestigious American Ballet Theatre (ABT) in New York City. Copeland returned to the program again in the summer of 2000, after graduating from high school ("Misty Copeland")."During performances, Copeland was asked to wear makeup that would make her appear white and help her blend in with the rest of the dance corps." ("Misty Copeland"). She has written an inspirational children's book fictionalizing her experience and a memoir that explores her childhood, her path to success, and the setbacks she encountered along the way" ("Misty Copeland"). Despite the success and the fame, Misty Copeland is still just that little girl with big dreams. Without her power to overcome obstacles and push through the hard times she would not be the incredible role model she is today. Misty Copeland is the perfect example of a hero because of her endless determination, perseverance, courage, and ability to inspire. She has established a legacy that would later open doors for all African American ballerinas.

Throughout her career, Copeland's dedication and determination to ballet kept her from turning away from her ultimate goal, becoming a Prima Ballerina. She continued to show determination even when circumstances grew difficult. All through Copeland's life, she was faced with family troubles and starving times. With her mother always moving from one man to the next, she learned to have faith and to know that struggles can't last forever; "On a personal level, growing up in the situation I did, constantly struggling and having a single mother with six children, I think all of those things gave me qualities that helped me as a dancer. Thick skin and perseverance to keep striving helped me. It's just a hard existence and some people aren't built for it. They may have all the talent in the world but just not have what it takes to make it" (Copeland). The struggles of Copeland's childhood provided her with a sense of determination, a sense that, because of what she went through, she could achieve anything. Despite her triumphant accomplishments as a dancer, she was not always in the spotlight. She often felt slow and behind because her passion for ballet sparked much later than any of her professional peers; "Her team's coach noticed her talent and recommended that she attend ballet classes at the local Boys & Girls Club. Copeland's natural ability was quickly recognized, and, though age 13 was a late start for a serious dance career, Copeland began taking classes at the San Pedro Ballet School. " ("Misty Copeland | Biography"). Misty Copeland was not only the "wrong race" for classical ballet, but she also started 11 years too late. It required an immense amount of determination to even dream about becoming a professional after such a delayed start. With her faith from childhood and huge sense of determination, Misty Copeland beat the odds of becoming an African American soloist at a prestigious ballet company.

"If you can't fly then run, if you can't run then walk, and if you can't walk then crawl, but whatever you do, you have to keep moving forward." (Martin Luther King Jr.) And that's what she did. No matter what happened, Copeland always continued to move forward with her astounding ability to persevere. Due to her harsh life at home, Misty Copeland had preparation for the hardships and criticism of ballet. She used this capability to help her persevere through the vigorous times." You need perseverance, determination, and drive to succeed in the ballet world. All my faults and insecurities as a child were highlighted by ballet and pushed me to improve myself" (Copeland). Thanks to Misty Copeland's persistence through the trials of life she became an inspiration to everyone. The pressure that she felt throughout her career tested her not only physically but mentally. Without her perseverance she would have not become the amazing individual we can all come to respect. When Copeland's dance career began to take over, the pressure of her mother and success overwhelmed her; "For a time Copeland lived with her coach, who owned a dance school in San Pedro and encouraged her to pursue a professional career. Copeland's mother, meanwhile, was adamant that her daughter complete her high school diploma requirements." ("Misty Copeland | Biography"). It would have been easy for Copeland to skip her last year of school and go straight to ABT. But, due to her over achieving attitude, she felt that it was right to finish school, even with the burden of a professional dance career. Without her perseverance this goal would be unreachable. Perseverance is an extremely important trait in a hero,without this trait, there would be no hero. There would be no way for Misty Copeland to get where she is today without the ability to persevere and provide herself and everyone around her with a sense of hope.

Misty not only was determined and resilient, but also had courage to break through the racial wall that confined the art of ballet. Copeland continued to strive for her dream even if it meant leaving her family and risking discrimination. After her rise to the top she continued to inspire, even with the scars of her lonely life at home. She was challenged with many obstacles in her life. Her childhood was filled with hardships and vicious people who rejected her newly found dream; " Misty relates to the challenges she faced, from living on food stamps to a bitter, high publicized custody battle between her mother and her dance teacher. Through it all, Misty remains true to herself and committed to her goal" (Copeland). Copeland's ability to follow through with her goal and forget about her past is a true sign of courage. To keep quiet and humble even when her life began to change drastically. Misty Copeland's mother was never supportive of her, and always had heavy chains around Copeland's neck; "When her training became more intensive, Copeland moved in with Cynthia Bradley (dance teacher) and her family in order to be closer to the studio. In 1998, at age 15, she won first prize in the ballet category of the Los Angeles Music Center Spotlight Awards. That summer she was accepted with a full scholarship into the intensive summer program at the San Francisco Ballet" ("Misty Copeland | Biography"). The courage displayed by Copeland in this example is truly inspiring. She moved away from her mother to save herself and to enhance her career. Not only that, but the courage to get on that stage knowing that her mother and so many other doubtful influences would be watching, waiting for her to fail. Despite that substantial weight on her shoulders, she proved them wrong and won an award that changed her life forever. Misty Copeland used courage to abandon her past and focus on her future. Being brave among the unbelievers. She continued to keep faith in herself and others, and that is true courage.

Copeland's sense of determination, perseverance, and courage have inspired me, and people everywhere, to accomplish what is thought to be impossible. She has given me and dancers all over the world power to overcome obstacles that seem unbreakable. Without these heroic attributes she would not have been able to become the key that unlocked the stereotypes of the ballet world. Misty Copeland single handedly became the first African American ballerina to solo in the company and to essentially, integrate ballet. She seized these dreams despite her underprivileged childhood and late start. Copeland's tale, "is an inspiration to anyone--man or woman, black or white--who has ever chased a dream against the odds." ("Misty Copeland"). Everyone can use the inspirational story of Misty Copeland to enhance the morals and values of their own life. The inspiring story of a talented, courageous African American woman can inspire everyone to become a "dreamer against the odds". Misty Copeland is an inspiration to people around the globe because she was able to break through a racial barrier. She inspires young girls to follow their dreams, even if it means to face criticism. Copeland continues to give hope to those who feel like their is none and a chance to anyone who is brave enough to have a dream as ambitious as hers. Her passion and ability to push on through struggles makes Misty Copeland, that little girl with big ambitions, My hero. "I Believe in human beings, and that all human beings should be respected as such, regardless of their color" (Malcolm X). "This is for the little brown girls" (Copeland).