by Helen from Roseville

"I cannot help wondering sometimes what I might have done if I have lived in a country which had not circumscribed and handicapped me on account of my race, but had allowed me to reach any height I was able to attain."

Mary Church Terrell was a very inspirational woman. She is best known for being a member of the NAACP (National Association for the Advancement of Colored People) and an advocate for civil rights and suffrage movement. She lectured throughout the country on the importance for black women to vote and wrote stories, poems and articles about race and gender for magazines and journals. Terrell even attended the Brown vs. Board of Education landmark case. Even with the "obstacles of race and sex" she was able to be a big American influence.

Mary Terrell was born to former slaves Robert Reed Church and Louisa Ayers during the Civil War. She grew up in a rich family and was taught the value of education by her parents. Later she became one of the first black women to earn a college degree in Oberlin College in Ohio. In 1884 she earned her bachelors and in 1888 she earned her masters degree in education. She then became a teacher and principal of M Street Colored High School, which later was renamed to Dunbar High School. Terrell was the first African American woman to be appointed to a school board. She participated on Washington's Board of Education from 1895 to 1901 and then again from 1906 to 1911. The law stated that married women weren't allowed to work as educators, so when she married Robert Heberton Terrell, who was D.C.'s first African American municipal judge, in 1891 she resigned from her job. 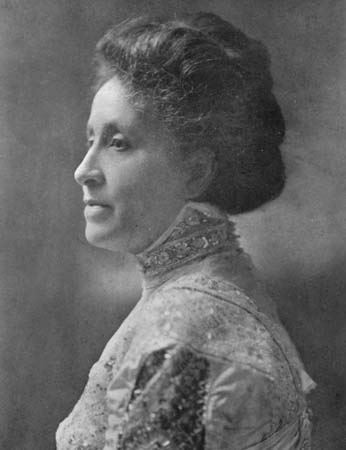 Mary Church TerrellAddison N Scurlock[Public domain] via WikimediaAfter resigning from her job Terrell became involved in the women's rights movement. She focused on voting suffrage. Unfortunately, white women were not willing to work together with African Americans to earn their rights because they thought no one would want to give black women the same rights. She realized she belonged "to the only group in this country that has two obstacles to surmount, both sex and race." So in 1896 Mary Terrell founded the National Association of Colored Women (NACW). She was the first president of NACW from 1896-1901. Terrell used this position to advance social and educational reforms.Their motto was "lifting as we climb" which promoted racial uplift with education and activism.

Later in May of 1954 segregation of the schools was called unconstitutional in the landmark case Brown vs. Board of Education. W.E.B. Du Bois motivated Terrell to start another association called the National Association for the Advancement of Colored People (NAACP). Later she served on a committee that investigated alleged police mistreatment of African Americans. From 1898 to 1900 Mary Church Terrell attended the National American Woman Suffrage Association. In addition, in 1904 in Germany, Mary Church Terrell gave a speech to the International Council of Woman entirely in German. At the age of 86 Terrell she was the first black woman admitted to the Washington chapter of American Association of University Women.

In 1950 Mary Church Terrell was still making a change. She was refused service in a restaurant even though the law was "to serve any respectable, well behaved person regardless of color, or face $1,000 fine and forfeiture of their license." She launched a campaign to reinstate the anti-discrimination laws. Terrell and other activists sued the establishment on the grounds that it is unconstitutional. Terrell, along with other activists, targeted other restaurants with tactics like boycotts, picketing and sit-ins. On July 8, 1953 court ruled segregated eating places were unconstitutional and it banned discrimination in public places.

Mary Church Terrell died on July 24, 1954, which was two months after segregation of schools was called unconstitutional. Even when she was 90 years old Terrell was still making a difference. Mary Church Terrell helped change laws to help civil rights and helped with the suffrage movement. "I cannot help wondering sometimes what I might have become and might have done if I have lived in a country which had not circumscribed and handicapped me on account of my race, but had allowed me to reach any height I was able to attain." This is something Mary Church Terrell said and it means that if there were no obstacles that stood in her way she could have made an even bigger historical influence.

Mary Church Terrell's father was the first African American millionaire in the South, due to real estate, and her mother owned a hair salon. She studied in Europe and became fluent in French, German and Italian. Terrell was motivated to become an activist when she heard that Thomas Moss, a close friend, was lynched in Memphis. Terrell was inspired to start the NACW when African American women were excluded from planning the 1893 World's Fair. She even wrote an autobiography called A Colored Woman In A White World.