by Michael from Elgin 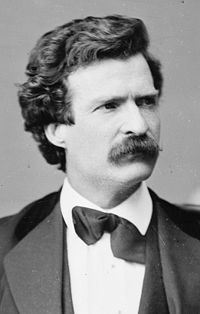 Mark Twain-en.wikipedia.org/wiki/Mark_Twain"Here was a gorgeous triumph; they were missed; they were mourned; hearts were breaking on their account; tears were being shed; accusing memories of unkindnesses to these poor lost lads were rising up, and unavailing regrets and remorse were being indulged: and best of all, the departed were the talk of the whole town, and the envy of all the boys, as far as this dazzling notoriety was concerned. This was fine. It was worth being a pirate, after all." - The Adventures of Tom Sawyer.

My hero is Samuel Langhorne Clemens aka Mark Twain, the author of classic novels such as Huckleberry Finn and the Adventures of Tom Sawyer. Twain was a hero because he used his writing skills and mind to share his experiences of the world through writing. He's also a hero because he did what he could to save his family. He had a interesting life with many jobs and responsibilities to carry out these tasks.

Samuel Langhorne Clemens was born on November 30, 1835 in Florida, Missouri. When he was 4 years old, he and his family moved to Hannibal, Missouri, that had a population of around 1,000 people. His father, John Clemens, was a storekeeper, lawyer, judge, and land speculator. His father dreamed of wealth but never achieved it, and this may have contributed to the fact that he wasn't a smiley person. Twain's mother, Jane Clemens, was a homemaker and was a loving mother. In 1847, Twain's father died, and they were now in economic trouble. But this economic trouble is what shaped Twain's writing skills and books. With all the crime in Hannibal, the place inspired Twain to write about boys who were troubled. Twain worked as a riverboat pilot, served in the Confederate Army, was a newspaper article sketch artist and editor (which is where he earned his name), and wrote books such as Tom Sawyer and Huckleberry Finn. Twain received public honors and received degrees from Oxford and Yale. Twain died on April 21, 1910, at the age of 74, in Redding, Connecticut.

I believe that Mark Twain is a hero because of his courage. He grew up in a crime flourishing town, was poor most of his life, and lost his father when he was 12 years old, and had to work so that his family could survive, and yet he still had the willpower to live and achieve his dream of becoming a writer. He went through a hardship and came out on top. He shared his world experience with mankind. When Twain's father died, he quit school and got a job to help his family survive. He could have stayed in school and had many more opportunities with better jobs. But he didn't. He wanted his family to stay alive because it was all he had left. He made sure that he was going to have someone to share his accomplishments with.

Mark Twain has, in many ways, affected my life. He's impacted my life by showing me that there is a world beyond ours whose story can be told through such a simple task of putting ink on a page and having an imagination. He is important to me because, had I not known about him, I wouldn't enjoy writing stories and essays. He showed me that family is more important than anything and that we should do anything to protect and help them. He showed me that even in dark times, we must all have hope.

Mark Twain is a hero to many people and should be. He went through dark times to get to where he ended up. He never gave up hope. He helped his family by obtaining jobs and received much world experience, which he shared with everyone through his writing style. He did whatever he could to help and ended up receiving two degrees. He did the best he could and seemed to have no regrets at the end of his life.