Tommie Hamaluba, iEARN Global Educator and a teacher at Gaborone Senior Secondary School, located in the city centre of Botswana, Africa, is working to help eradicate malaria. Along with other key project facilitators, Dr. J. Nirmala, and Mrs. D. Lakshmi Narasamma, from Botswana and India, the team hopes that, with the insight of students and others around the world, they can assist in controlling and eventually abolishing the dreadful disease.

Malaria is one of the oldest, deadliest, and most common infectious diseases affecting humans. It affects half a billion people a year and kills between 1.5 and 2.7 million yearly, particularly young children and pregnant women in sub-Saharan Africa. Malaria takes the lives of approximately 2800 children in Africa each day, and in regions of intense infestation, almost half of all toddlers may die of acute malaria. While much of the world’s peoples are at risk for malaria, about 80-90% of malaria-related deaths occur in sub-Saharan Africa where 90% of all infected people live. Even survivors of malaria are often later afflicted by anemia and developmental disorders.

Yet, this disease is preventable, and as Hamaluba feels, can be eradicated, with education as a primary step in the process.

Through iEARN (International Education and Research Network) Hamaluba is able to incorporate the topic of malaria into classroom curriculums around the world. Currently, students from Africa and India are researching the causes of malaria and are exploring different ways in which the disease can be prevented in iEARN’s Eradication of Malaria Project, which began in September of 2003. Students can learn from one another’s ideas and discoveries. Project results and summaries are sent to the Department of State Education, the presidents of the countries involved, School Net, and others. Discussion topics include how to avoid contact with mosquitoes, how to gain access to treatment, and more.

Scientific studies of the disease state that the prevention of malaria can take place primarily by trying to break contact between humans and mosquitoes and by administering drugs to people exposed to bites to prevent the disease’s onset. In recent decades, the focus towards eradicating malaria was to get rid of mosquitoes, primarily with the use of strong insecticides such as DDT. But these insecticides were eventually banned because of the great harm they had on the environment, especially within lakes and rivers where the runoff flowed. Since then, other more effective insecticides, less harmful to humans and the environment have been developed, but the cost is very high. The state of Florida in the U.S., for example, has been financially able to eradicate malaria using these new insecticides, but Third World countries simply cannot continue to spray insecticide over large land masses for long periods of time, as it would be financially impossible.

Malaria will be difficult to subdue for several other reasons as well. Along with financial scarcity, there is the lack of ability to clearly educate the masses on the disease, the political and social strife which is causing large numbers of people to move and group together into new areas, and the changes to the environment such as road building, mining, and irrigation which have created new breeding grounds for mosquitoes carrying malaria. But, through education and communication, this iEARN project is assisting the process both by bringing global awareness to it, as well as by enhancing discussion of potential solutions.

Hamaluba and his team refuse to allow this powerful opponent to prevail and are taking steps to overcome the deadly clutch it holds on so many of the world’s peoples. Starting with global communication, awareness, and thoughtful discussion, he and the iEARN team of teachers, students, and others are waging the battle against the seemingly undefeatable opponent with victory as the only acceptable outcome.

International Education and Research Network (iEARN) - is the world's largest non-profit global network that enables teachers and young people to use the Internet and other new technologies to collaborate on projects that both enhance learning and make a difference in the world.
Malaria Foundation International - Read about Tommie and his students' community work in the fight against malaria.
See Tommie's most recent campaigns here:

"Never doubt that a small group of thoughtful, committed citizens can change the world. Indeed, it is the only thing that ever has." ~Margaret Mead~

Tommie Hamaluba continues to work incessantly in the fight against malaria. He and his team are busy collaborating in the health forum of iEARN, and have also joined forces with MY HERO!

Tommie's work has gained the attention of many, including His Excellency, the President of Botswana! On November 21st, 2007, Tommy, 3 of his ICT Club students, and their school principal met the international dignitary! Amongst other important topics, Tommy shared with His Excellency details about his work with iEARN, My Hero, ENO, Malaria, and HIV/AIDS. MY HERO congratulates this true hero of education whose commitment to collaborative learning serves as a model to others, and is confident the world will continue to take notice of his great endeavors. 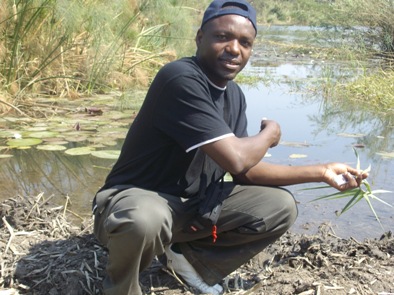 Tommie finished working on a Malaria 2008 campaign. Primary focus was on the region of Chobe, north Botswana. In the photo above he is at a river bank there, a common breeding ground for mosquitos, doing a survey of various malaria breeding sites as part of his continual study on ways to help eradicate malaria.

Tommie and his team of students also created a short film about their project for the MY HERO Film Festival. 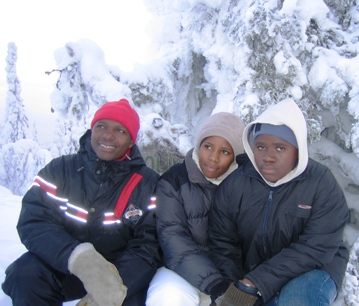 Tommie and his students in the snow in Finland

In February of 2006, Tommie traveled with two students to Finland, courtesy of the Finnish embassy in South Africa. The team faced a bit of a challenge in Finland, because thanks to climatic differences, many people did not know much about the dangers posed by malaria; but the team presented the disease as a serious one to tourists too. The trip showcased what Tommie and his team do in schools with ICT, and MY HERO was introduced in Finland at three schools in the ENO region as well!

Tommie and his team encourage individuals and organizations to take part in the fundraising and education necessary to win the fight against this relentless disease that kills an average of 1 child every 30 seconds.

Student Benson Keduele of Gabarone, Botswana, reports that the 2008 MALARIA CAMPAIGN successfully provided 500 bed nets to the small village of LESOMA IN BOTSWANA. Students are holding fundraising activities now for next year's campaign (2009) which will reach the small village of Tsau.

Congratulations to Tommie Hamaluba and his inspiring students!

Fever Trail: In Search of the Cure for Malaria
Mark Honigsbaum 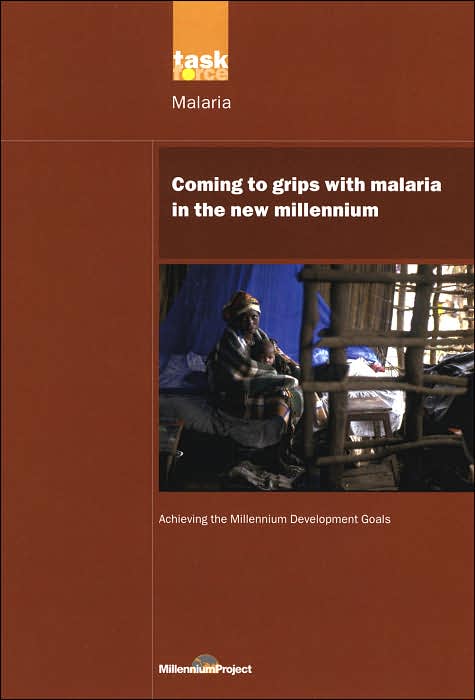