by Rizaldy from Jakarta

"Mozart exists, and will exist, eternally; divine Mozart - less a name, more a soul descending to us from the heavens, who appeared on this earth, stayed for a little over thirty years..."
(C. Gounod)

I know Mozart from the songs that my father listens to at home and from the books my father buys for me. At home my father and I listen to Mozart's songs together. I am very happy that we both can enjoy the music together. Mozart can make us a happy family. When my English teacher asked me to write a biography of my hero, I remembered him, so I write here about Mozart, my forever hero!

Wolfgang Amadeus Mozart was a great composer and performer (of violin and piano). Mozart was born on January 27, 1756 in Salzburg, a little town in north central Austria. He was the son of Leopold Mozart and Maria. Mozart had a big sister named Maria Anna Mozart who was always called Nannerl. Actually when Mozart was born, his father named him Joannes Wolfgangus Theopilus Mozart. Theopilus would be changed to Amadeus later. Mozart lived in a music-loving family. His father was a palace composer and performer. Nannerl was a kid with talent in music. When he was a baby, Leopold tried making a musical sound beside Mozart's bedstead, and Mozart responded to it. Eventually, Leopold realized that someday Mozart would be a great composer better than him. Leopold and Nannerl always practiced music beside Mozart.

When he was 3 years old, little Mozart was already interested in piano. A year later, Mozart began to compose music. Suddenly, his talent was more grown-up than before. From the time he was four years old, Mozart was trained hard by his father everyday. In 1762, Mozart and Nannerl were invited to do a concert in the Castle of Bavaria, Munich. Soon Leopold brought both of them to Munich. After his first concert there, Mozart got titled "infant prodigy." After their concert in Munich, they were invited to do a concert in Vienna. A young Mozart performed his trick, "closed-eye piano playing" and "one-fingered playing." Mozart impressed the King and Queen of Vienna.

In Bologna, Mozart got a good teacher, San Martini. He taught Mozart how to do a duet concert perfectly. Because of his seriousness, Mozart quickly learned it. San Martini promoted him to be a member of the Organization of Music Lovers. After some tests, Mozart became a member. He was the youngest member in history of Academia Filarmonica (in 1770, Mozart was 14 years old).

Mozart's name was very famous in Europe. So, Mozart, Nannerl, and Leopold went for a long trip to do some concerts in Europe. After his success, his father planned to go to Italy, the theater center in Europe, famous for its musical drama. In Italy, Mozart listened to a very sacred symphony in the Sistine Chapel. This sacred symphony could only be performed in this church and no one was allowed to alter it. But, Mozart copied the symphony and performed it for the mass. Pope Clement XIV was impressed and gave a reward to Mozart, a special cross, representing the Order of The Golden Spur. After that, Mozart always gave a little touch in every letter that he wrote with the sentence, "The horse rider." Also, he changed his name to WOLFGANG AMADEUS MOZART.

In 1778 Mozart, with his mother, went to Mannheim. There, at the house of the accomplished musician, Fridolin Weber (relative of Carl Maria von Weber), Mozart met his daughter, Aloysia, and he fell in love with her. He always made romantic music to play together with Aloysia as a singer. But his father disagreed with Mozart's decision to marry Aloysia. So, Mozart went to Paris. In September 1778, Mozart went back to Weber's house to propose to Aloysia. But Aloysia ignored him because she still wanted to be a great singer.

After his trip, Mozart went back to Salzburg, and he went again to Weber's house and there he met Aloysia's sister, Constanze. Mozart became the piano teacher of Constanze. In Vienna, in 1781, Mozart met Haydn and soon they were best friends. Mozart performed "The Abduction From Seraglio" and it was successful.

In June 1791, a stranger came and requested a requiem. Actually that man was a messenger of Franz Von Walsegg, who wanted the requiem for his wife. In the same year, "Magic Flute" was performed and was successful. On December 4, 1791, Mozart wanted to hear the requiem that he made. After his student played it, Mozart said to his wife, "Have I told you that the requiem is for myself?" He seemed to know that his days were already numbered and that he would die soon. On December 5, 1791, 35-year-old Mozart died. 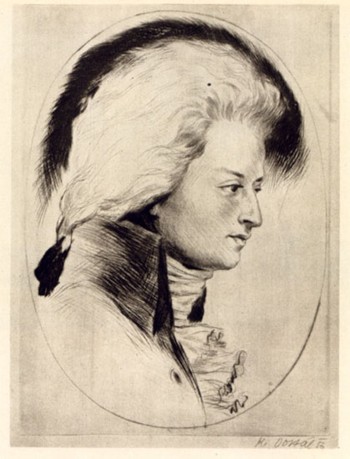 Etching of Mozart by K. Dostal

I chose Wolfgang Amadeus Mozart as my favorite hero because I love his music. He was a brilliant musician; he could compose any music and perform it well. He influenced so many of the revered musicians of his day, even until now. That's his spirit.

I took information about Mozart in this story from a book about Mozart written in my native language (Indonesian). The book is titled Seri Tokoh Dunia, Wolfgang Amadeus Mozart, written by Ciang Su Chin, published in Jakarta in 1995 by Gramedia Publisher, 15th printing. After I read the book, I made a summary, then translated my summary into English.

Wolfgang Amadeus Mozart said:
''Music, even in situations of the greatest horror, should never be painful to the ear but should flatter and charm it, and thereby always remain music.''