by Sasha from San Diego

Life Is A Gift
"Hardships often prepare ordinary people, for an extraordinary destiny." - C.S. Lewis. Lewis' quote exemplifies the journey that a man named Nick Vujicic has travelled - a man that has affected millions of people with his inspiring story. Nick Vujicic was born on December 4th, 1982 in Melbourne, Victoria, Australia without arms or legs. When Nick was very young, the law in Victoria stipulated that physically disabled children were not permitted to attend public schools. When the law was lifted, Nick was one of the first physically challenged children to go to school. Nick was the target of bullying because of his lack of limbs and that led him into a deep depression in which he attempted suicide. When Nick was 15, his classmates started accepting him as he was, and he sealed his faith in God which helped him cope with his circumstance ("Proving Disability Is Not Inability"). Nowadays, Nick is associated with many companies such as "Life Without Limbs," "Attitude Is Altitude," "PACER" and many others. The objective of these companies are to visit schools and workplaces to speak to people about bullying and other issues involving acceptance. In addition, Nick shares with the world how to be more appreciative of life, and the long journey he took to reach happiness ("Motivational Speaker"). Although Nick does not have any limbs, he managed to overcome his adversity and it is through his bravery that he has realized that life is a gift and is limitless. Nick also encourages people appreciate their lives, and motivates them to be happier. 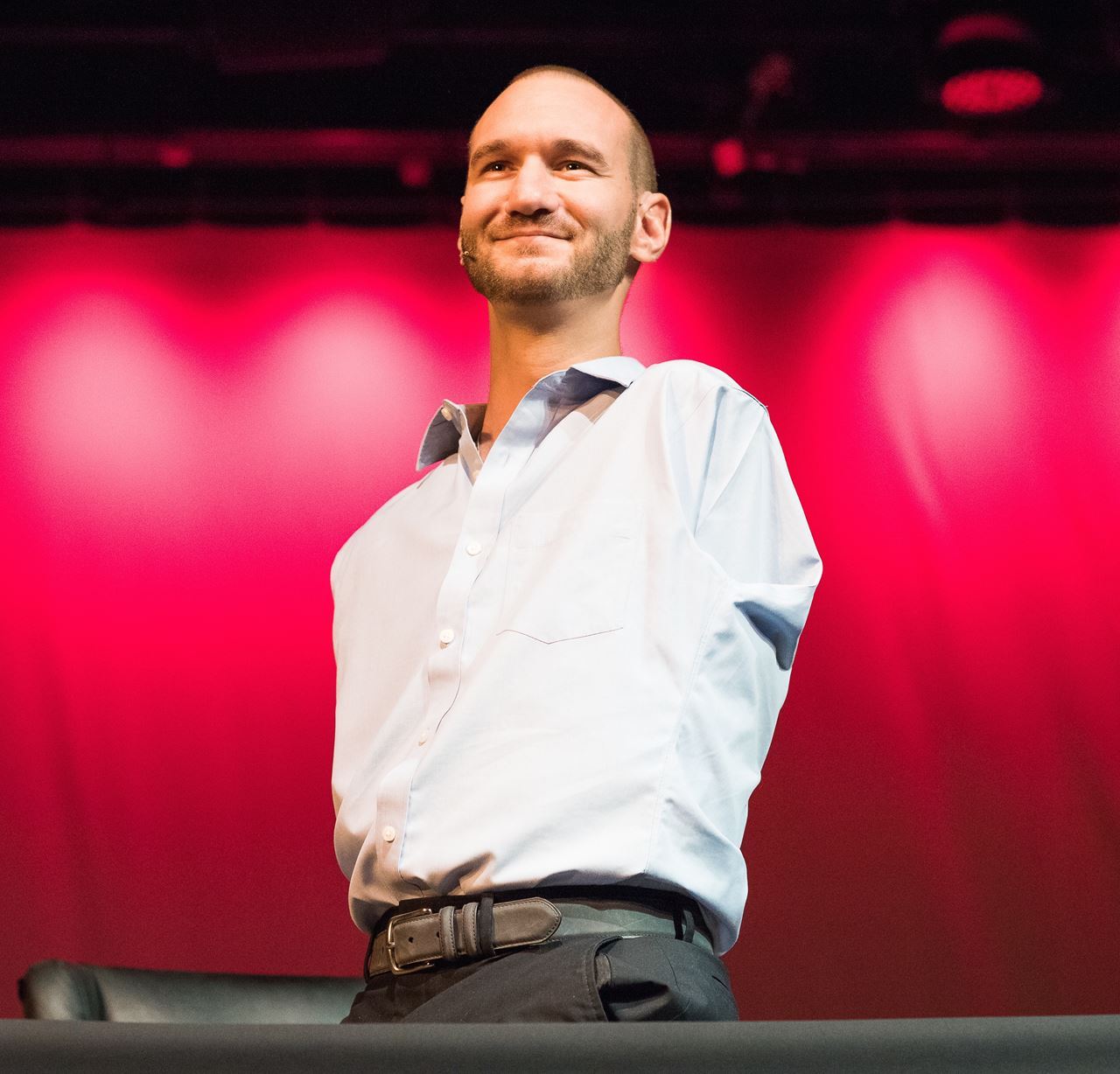 Nick Vujicic is a hero to the world because of his bravery in overcoming his adversity even with the physical challenges that he has to deal with in his everyday life. When Nick Vujicic was young, he thought that he was a mistake and that he couldn't do anything. As he grew older, he realized that even though he was less fortunate than most people, life is a gift from God and that he was made and put on this world for a purpose. "I won't pretend my life is easy, but through the love of my parents, loved ones, and faith in God, I have overcome my adversity and my life is now filled with joy and purpose," ("Proving Disability Is Not Inability"). Nick was brave enough to accept the fact that he had no limbs and had to come to terms with it. He realized that even though his life is hard, he is surrounded by loved ones that care for him regardless of his handicaps. In addition, turning to God gave him the faith in himself to change his life. One of the main topics that Nick talks about during his motivational speeches is that life is full of choices. "I have a choice. You have a choice. We can choose to dwell on disappointments and shortcomings. We can choose to be bitter, angry, or sad. Or when faced with hard times and hurtful people, we can choose to learn from experience and move forward, take responsibility for our own happiness," (Vujicic). This reflects back on Nick's life and the decisions that he made and how it impacted him. Nick could have easily given up and always been angry but he was brave enough to look at things in a different way. Through positive realization and behavior he was able to view his disabilities as a blessing which allowed him to open up his life to greater opportunities. It is through this epiphany that gave him the strength to motivate people to reevaluate their lives and make the right choices. Nick was brave enough to rise above his difficulties and issues and acknowledged that life is full of opportunities and that he should never take it for granted. Nick's bravery allowed him to push the limits of his capabilities. 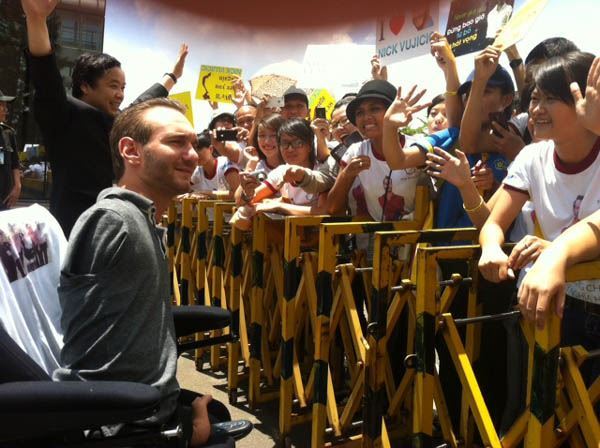 Nick VujicicQuanglinhtran154 [CC BY-SA 4.0 (https://creativecommons.org/licenses/by-sa/4.0)] Nick has become a hero to many people around the world because of his motivational speeches and lessons that he imparts to his audience. He cares about the world because he spends countless of hours trying to change it. One of Nick's many projects is his partnership with PACER which is an organization that prevents bullying. The PACER organization holds meetings and speeches to raise awareness about bullying. In one of his interviews, Vujicic says: "Having personally experienced all types of bullying for being 'different,' I know what it feels like to be picked on and pushed around, so this cause is very important to me," said Vujicic .  "I'm proud to partner with PACER to help spread the word that bullying is not OK, and that there are things that teens and adults can do to address bullying and make our schools and communities safer," ("Motivational Speaker"). From his own experiences of being bullied and looked upon as different, Nick wants to make sure that teens nowadays do not go through the same things he went through. He wants to show the world to that although he visually looks different, he is the same as everybody else which is an issue that all teens go through. This shows to people how much Nick cares about this cause because he is investing his time to teach and empower his audience that bullying is not okay. Nick tirelessly travels around the world with the objective to spread positive attitude and teach lessons to people."As a motivational speaker, Vujicic has been travelling internationally and focusing on teen issues. Having addressed over three million people in over 24 countries on five continents and he speaks to corporate audiences, congregations, and schools," ("Proving Disability Is Not Inability"). This quote clearly shows that Nick cares so much about this cause that he goes around the world spreading his perspective and teaching the valuable lesson about acceptance. Nick's drive to raise awareness about these issues is because he wants people to live in a world without bullying and with acceptance. He is so passionate about acceptance that he spends his time travelling throughout the world only for one reason - he cares.

Life without limbs does not deter Nick from doing the things that he loves to do. Not only is it because of his positive attitude that he views life as a gift and wants to take full advantage of it, but he also wants to impart this message to the rest of the world. Nick is a deserving hero because even though he was faced with hard times, he had the perseverance to pick himself up and look at things in a different way. Nick shares these messages and lessons with the rest of the world so that they can do the same thing. "Life may be kicking you around right now. You may wonder if your fortunes will improve. I'm telling you that you can't imagine the good that awaits you if you refuse to give up. Stay focused on your dream. Do whatever it takes to stay in the chase. You have the power to change your circumstances. Go after whatever it is you desire," (Vujicic). Nick Vujicic inspires me because despite his disabilities, he tries to do everything that a "normal" person can do and tries to live life without any limits. He tells us his story about how he overcomes his hardships and despite his circumstances, he chooses to accept it and is always happy and positive. Nick Vujicic is a hero to me and millions of people around the world because despite the fact that he does not have limbs, not only is he positive, but he views this as a blessing.

Nick Vujicic movies and videos: The Butterfly Circus, The Lost Sheep, No Arms. No Legs. No Worries!