"I have been a witness, and these pictures are my testimony. The events I have recorded should not be forgotten and must not be repeated."

Once, while riding in a military Humvee in Iraq, James Nachtwey had a live grenade thrown in his vehicle by an insurgent. Not only did he survive, but he stayed conscious long enough after the explosion to photograph his partner’s life being saved by a medic, before passing out himself. The explosion was so fierce that it cost his fellow journalist his right hand. Airlifted to hospitals overseas, Nachtwey was barely finished with his recovery process when he traveled to southeast Asia to document December of 2004’s devastating tsunami.

He has witnessed a fatal attack on fellow associates, documented the aftermath at Ground Zero, has spent time in areas of armed conflict and civil war where most would fear to tread, and has captured images featuring the worst of human suffering.

He has done in-depth photo essays throughout Central America, in Israel, the West Bank and Gaza, Lebanon and Afghanistan, in South Korea, India and throughout southeast Asia, in the former Soviet Union, Bosnia, Chechnya, Kosovo, and in Somalia, Rwanda, Sudan, South Africa, amongst others.

For some, photojournalism is simply a job. For Nachtwey, a self-taught photographer, it is a passion which drives him to put life and limb on the line to document history, strife, warfare, poverty, famine, starvation, and social, political and environmental issues. Just as he, himself, was moved by images of the American Civil Rights movement and the Vietnam War, Nachtwey understands the power of the camera lens and the eye that guides it.

It was the tormenting images of Vietnam and the inspirational ones of Dr. Martin Luther King Jr. and other civil rights pioneers, that resounded in his being while he worked odd jobs on merchant marine ships and even as a truck driver. These powerful images would lead him to his ultimate life’s work. And ironically, these odd jobs upon seas and highways, would also eventually assist him in his own global journeys as a photographer.

Coined a photographer of "the apocalyptic events of our time," Nachtwey’s images of war, pollution, human suffering as a result of armed conflict (in Sudan, amongst others), famine, crime and punishment, and more, have brought these events, the suffering, the pain, into the eyes of those who would likely never have witnessed them otherwise.

It is his knowing, watchful eye, his bold spirit that dares to tread amongst danger, and his keen sense of knowing precisely when to shoot, that have taken Nachtwey’s images far beyond typical war photography.

They are images that inspire, that provoke emotion, that call out for action and change.

A contract photographer for Time magazine since 1984, his images have graced the publication, amongst others, for decades. He has also had solo exhibitions throughout Europe and the United States that have moved the public with their visual eloquence.

The professional world has taken notice as well. He has received a myriad of awards and commendations for his work including, amongst others, the Martin Luther King Award, the Dr. Jean Mayer Global Citizenship Award, the Common Wealth Award, the W. Eugene Smith Memorial Grant in Humanistic Photography, and most recently, the TED Prize. Several awards he has received multiple times, including the Robert Capa Gold Medal five times, the Magazine Photographer of the Year seven times, the World Press Photo Award twice, and the Bayeaux Award for War Correspondents twice.

He was even the subject of a 2001 Oscar-nominated documentary titled "War Photographer" directed and produced by Christian Frei.

Many of his own haunting images have been compiled into a book aptly named Inferno. This moving collection features striking, staggering, often outright frightening, images of war and brutality, dire poverty and starvation, and other harsh elements of global suffering.

It began in 1976 when he served as a newspaper photographer in New Mexico, broadened when he moved to New York in 1980 to become a freelance magazine photographer, and catapulted when he was sent on assignment to Northern Ireland in 1981 to cover civil dissension during the IRA hunger strike. Since then his passion has driven him further and further, with no sign of slowing.

Nachtwey documents conflict, pain, poverty, and suffering, preserving it in hopes that it may end. Using the brilliance of his mind, keen eye, and steady hands, he risks his own life to ensure that the pain of others will not go unseen by the world, but will be also documented and preserved in the minds of those who see it through his work, in hopes that they will heed the call to end the suffering.

The TED (Technology Entertainment Design) Prize: - Each year a maximum of three individuals who have shown that they can, in some way, positively impact life on this planet, are honored by the TED Prize. Winners will be granted a WISH to change the world. James Nachtwey has been selected as a 2007 winner.
National Press Photographers Association: - TIME photojournalist Nachtwey, correspondent Weisskopf, injured in grenade attack in Baghdad
About:Photography - features an extensive biography on James Nachtwey.
National Geographic 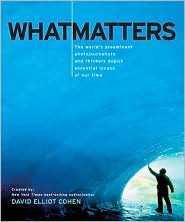