by Jane Wallace from Los Angeles, California in United States 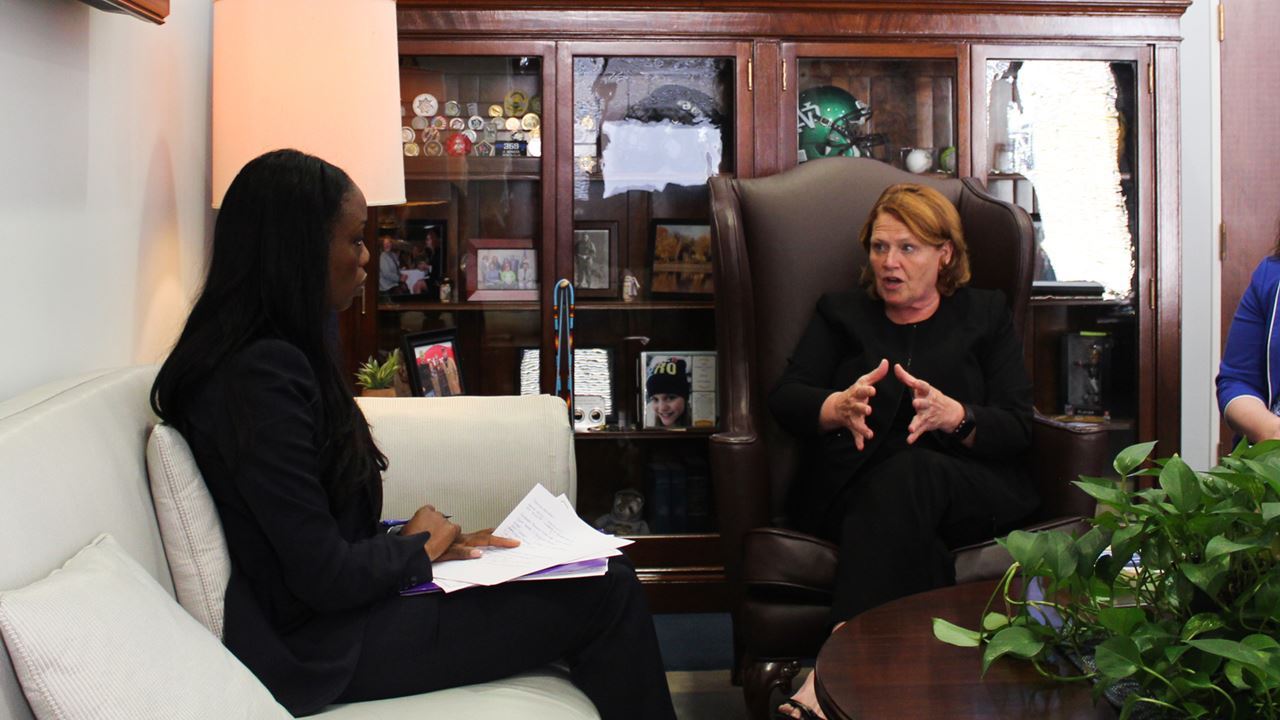 Dr. Nadine Burke Harris (left) with Heidi Heitkamp (right)Flickr [Public domain]Dr. Nadine Burke Harris, the pediatrician appointed as California's first Surgeon General by Governor Gavin Newsom, is a champion for children who bear the invisible scars of tough childhoods. It was thought until the 1990's that children "outgrew" abusive beginnings. Doctors later discovered instead that children internalized them. It's called toxic stress, and science has revealed that too much of that negative stress in a growing child's life physically changes their bodies and, if untreated, may reduce their life expectancy by as much as twenty years. Burke Harris believes toxic stress is both "treatable and beatable," but it must be acknowledged first.

Burke Harris always knew she that wanted to be a doctor. But she started out in America just a four-year-old Jamaican girl in a scientific family. They'd moved from Kingston to Palo Alto California where Nadine felt like a "fish out of water" in the mostly white and Asian affluent community surrounding Stanford University. That didn't stop her. At age 5 she wrote a letter to her pediatrician asking why her little toe worked. She was ahead in school because Jamaicans start earlier. She always did well. After school, Nadine would join her mother at her mother's nursing job and read to her patients.

Graduating from college at just 20 years old, her medical education came from some of the best schools in California with just a breakout to Harvard for a Masters degree in Public Health. She started work in free a clinic in one of the roughest neighborhoods in San Francisco - a place where she served as the only pediatrician for 10,000 kids. At first the work was satisfying and self-fulfilling because the children were getting the care they'd needed for a long time - but in the back of her mind, Burke Harris was seeing diagnoses that didn't quite fit. Cases of asthma and attention deficit disorder were common and suggested other things going on. Then a colleague brought in the landmark study about toxic stress and Burke felt a profound "Aha!".

Dr. Burke Harris would found and run the Center for Youth Wellness to focus on that stress. These Adverse Childhood Events could be scored and treated across multiple specialties, sometimes with parents included. Ignored, the toxic stress would remain the biggest threat to the future health of these children, regardless of ethnicity or class, tripling the likelihood of heart and lung disease and changing the hormonal and immune systems. With help, that damage could be arrested or repaired.

Dr. Burke Harris assumed the medical profession would be as excited by the information as she was. Instead, she was met with deafening silence. She thinks it may have been because that toxic stress was too close to home for many doctors, so she decided she'd have to shout it from the rooftops and form a movement of her own. She was determined to "give voice to the voiceless."

Along the way Dr. Burke Harris has earned more awards than can be cited here. Among them, she was singled out for the prestigious Heinz Award in 2016. Also, the documentary "Resilience: The Biology of Stress and the Science of Hope," which includes her in a large role, premiered at the 2016 Sundance Film Festival.

Her crusade against the debilitating curse that toxic stress casts on the future health of each innocent child, consumes a big portion of her life today - and her message remains simple: "The single most important thing we need today is the courage to look this problem in the face and say this is real and this is all of us."

Director James Redford and Producer Karen Pritzker are passionate activists who are using the power of film to create radical change in society’s understanding of dyslexia and of the shattering effects of childhood trauma.

Their penetrating and empowering film, Resilience: The Biology of Stress and the Science of Hope, is available as an educational tool for schools and community groups. It is a pleasure to shine the MY HERO spotlight on these two heroes in the story, James Redford and Karen Pritzker.