by Danny from Boca Raton

"Male and female citizens, being equal in the eyes of the law, must be equally admitted to all honors, positions, and public employment according to their capacity"

Imagine one woman trying to start a revolution in a time where women only stayed at home and served their husbands and children. This is only one of the obstacles Olympe de Gouges faces in her path to giving everyone equal rights. De Gouges was one of the first advocates for women’s rights, democracy, and the abolition of slavery in the French-American colonies.

Olympe de Gouges was born in Montaubon in Southern France, on May 7, 1748. The records say she was born from modest parents: a butcher and a washerwoman. However, her true parents are somewhat of a mystery. It is commonly believed she was the daughter if Pierre Gouze and Anne Olympe Moisset. Even though a rumor spread that she was the daughter of a person high in social rank named Marquis Lefranc de Pompignan. Another rumor stated she was the illegitimate daughter of King Louis XV. Her true parentage was never revealed, that led to her rebelliousness when she was a kid. That rebelliousness came to play in her adult life. When de Gouges turned 17 in 1765, she married an older French Officer named Louis Aubry. Two years into their marriage, they had a baby boy. A year later, Aubry died. De Gouges revolted against taking the position of “widowed mother.” She vowed to never re-marry.

De Gouges also stood up against slavery in a time where slavery was a very common thing, that people didn’t think was wrong. Her declaration was not only about women but about everyone. It mostly focused on women, but it uses women as an example for everyone. She had a unique way of expressing her feelings, it was in writing plays. Her play Zamore and Mirza was against slavery. The play wasn’t even shown for three years, and they had to change the name of it. De Gouges attacked slavery in the French-American colonies. She had very few allies for this cause because, at the time, everyone thought slavery was the right thing to do. De Gouges had extraordinary ideas, which didn’t impress anyone at the time.

Not only was de Gouges a playwright, she was an advocate for Women’s Rights. She joined and made a lot of different groups to support women’s rights. One of the groups she joined was The Society of Republican and Revolutionary Women. They would speak about how women’s rights were inalienable. They encouraged de Gouges to write a document that would serve as a declaration of rights for women. She wrote The Declaration of the Rights of Women and the Citizen. This stated that women should have equal rights for men and woman. It also stated that the women had not gained anything from the French Revolution. De Gouges died in her support for equal rights. She was arrested for her “revolutionary acts” and sentenced to death on November 2, 1793. She was executed the next day for “opposition to the death penalty.” She said she was pregnant in an attempt to escape the guillotine; she was examined by doctors, and was proved wrong.

Olympe de Gouges was one of the most patient people ever, she would never quit. In her battle for equal rights she spent days just looking for people to follow her, or to get people to read her works on Women’s Rights. Another bump in the road de Gouges faced was that she wanted to be a playwright but she had always had problems with her writing. She was poorly educated, and her grammar and punctuation were not good at all. She couldn’t even read for a good portion of her life. Despite her setbacks in writing, she continued and persevered to become a very good writer. She began to write pieces that influenced the course of Human Rights, especially for women. Another of the things she persevered in was her revolutionary ideas. Most people at the time thought she was crazy but she knew inside her that it was the right thing to do. This is why she was “a genius ahead of her time.” She literally fought until death to inspire people to help her start a revolution.

Olympe de Gouges had ideas of equal rights for everyone, which in that time was a revolutionary idea. Her bravery would continue to influence many different generations that fought the battle for equal rights. 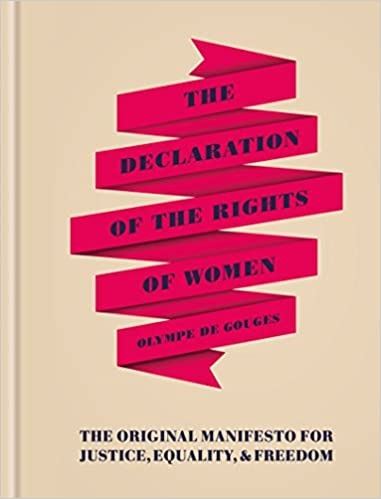 The Declaration of the Rights of Women
Olympe de Gouges