by Carla from Longmont

On April 8, 1993, Ellen became the first Hispanic woman to fly into space. Ellen and four other male astronauts were aboard the space shuttle Discovery. On November 3,1994, Ellen made a second fight into space on the space shuttle Atlantis. Her special job was to use robotic arms and send them into space to catch a small 2,800-pound satellite called "Spartan."

A groundbreaker, that is what Ellen is. It’s interesting to be an astronaut, but to be the first Hispanic woman astronaut is more interesting. Many women say, “Oh, I’m a girl, what’s the use?” Ellen didn’t believe in that. She did what she wanted to do without thinking about what people said or what background she came from. Being the first one to do something is pretty difficult. Astronauts receive a lot of training and Ellen never gave up, even though some people didn’t believe in her. 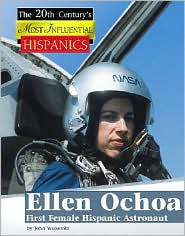