by Ashley from Spokane

"Peace has no finishing line."

Arias came into office the first time during the armed conflict that was raging in Central America in the 1980's. In February of 1987, Arias proposed a peace plan for Central America that would set a date for a cease fire, ensure amnesty for political prisoners, and schedule free and democratic elections. The plan, known as the Esquipulas II Accords, or the Procedure to Establish a Firm and Lasting Peace in Central America, was signed by the leaders of Guatemala, El Salvador, Honduras, and Nicaragua. Oscar Arias Sanchez was awarded the Nobel Peace Prize in the same year. With the monetary winnings of the prize he founded the Arias Foundation for Peace and Human Progress. This foundation helps to work for equality for women in Central America, to fund change-oriented philanthropy, and to support demilitarization, as well as conflict resolution in developing nations. Within the country of Guatemala, Arias is working hard on reducing poverty, improving the education system, and reducing crime.

I have never met Oscar Arias Sanchez, nor have I ever been to Costa Rica. I have, however, traveled to El Salvador and seen the destruction and the pain that was caused by the civil wars in the 1980's. An entire generation in Central America was more or less wiped out by various forces and most family members lost loved ones. The hardest part about the loss was that there were no bodies to bury and no tomb for the families to go and place flowers. I think that any man who works toward peace and who strives to make the world a better place for others is someone that can be considered a hero. Arias helped to stop that pain by bringing the leaders of these countries together and drafting a plan. He has worked throughout his life to bring peace to people around the world through his participation in various organizations, including the one of his own founding.

Another measure of a man is his interaction with other people. Oscar Arias Sanchez has been elected to the presidency for two terms. He has worked hard for his country in the time that he has been in office; however, I have never heard of another president who has spent so much time walking the streets to listen to his people. Arias is known for his interaction with his constituents whether they are at a presidential function, or in the market place buying their dinner. He takes the time to listen. This also shows the trust that he has for his people because he does not fear being attacked or injured while he is walking about town.

Oscar Arias Sanchez is an example of a man who works for the good of his neighbors and for his world. Through his work and his life he has exemplified a man who is caring, and compassionate. I have seen the remnants of war and the havoc conflict can produce on the land and to the people that live on it. I know that I don't want to live in a world like that, and that is why I am grateful for the work that Arias has done for humanity. I hope that in some way my life can also exemplify compassion and can bring about peace like Oscar Arias Sanchez. 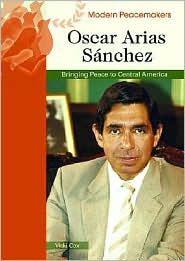 “History has not been made by the men who predicted failure, who renounced their dreams, who abandoned their principles, who allowed laziness to stultify their intelligence. Those who at times have fought for human triumphs in solitude have always been accompanied by the spirit of their peoples, by the faith and destiny of many generations.”
- President Oscar Arias Sanchez